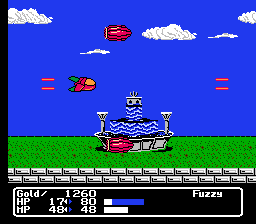 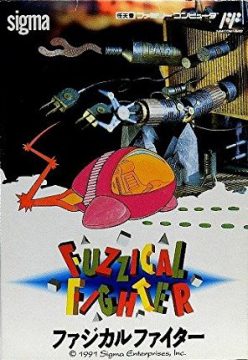 The popularity of Enix’s Dragon Quest caused not only a huge wave of clones for the Famicom, but also some interesting hybrids that attempted to graft RPG mechanics on other genres. Sigma/Make Software’s Fuzzical Fighter is one of these games, which presents itself as a shoot-em-up/RPG two-for-one.

The game opens up with a cutscene detailing the light of a world called “Funny”, whose powerful dimensional stone was stolen by enemies. As a pilot named Mark, it’s your job to hop into your fighter and get it back. Each level opens in a throne room of one of the various cities, as you talk to the king and his aide, which gives a small blurb on their plight. Then you can walk down the stairs and saunter around town, which includes three stores: a ship equipment shop, an item shop, and an inn. You’re given basic equipment and a small stipend of cash, which you can’t really do much with, and then are allowed to proceed into the game proper. 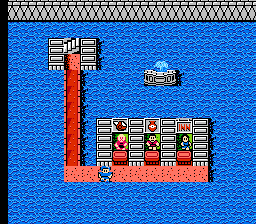 The shoot-em-up segments are pretty standard for a Famicom, though its nomenclature has changed to match its RPG getup. Defeated enemies yield gold rather than points. Your health is presented as “HP” with a numerical designation rather than a shield meter; you also have MP for use with magic, as well as items. You have all of the magic spells at the outset, though not necessarily the amount of MP to use them – these can damage everything on the screen, send you back to town, heal your HP, and make your ship momentarily invincible. The items, activated with the Select button, function in a similar way, though they’re bought individually and consumed after use.

Though you only have a standard weapon at the beginning, the shops have a variety of weapons, consisting of the usual lasers, multi-directional shots, wave beams, reverse shots, and so forth. Though you can own multiple weapons, you can only equip one at a time. At any point during the shooter segments, you can pause to re-equip, as well as modify your magic or items. The equipment shop also allows you purchase engines (to change the speed of your ship), shields (to increase your defense) and items to expand your HP and MP. 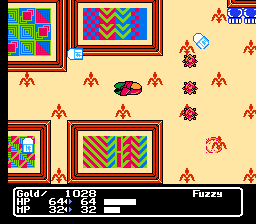 Other minor elements have been borrowed from RPGs too: your HP and MP are not automatically restored after beating a level, so you need to spend a small amount of money to recover at an inn. There is no real game over screen, so if you run out of HP (you only have a single life), you’re simply sent back to town with half of your gold. You even get passwords from the king’s aide that let you resume progress in any of the game’s eight levels. Technically you can even warp ahead to any level you want, supposing that you’re willing to replay the levels and grind up enough gold to be able to afford the service.

There’s always been an issue with grafting RPG mechanics onto any arcade genre, and that’s one of balance. The enemy placement and bullet patterns are designed in a way that it expects you to be able to take some damage, particularly with the tougher enemies that occasionally show up midway through each stage. As such, it incentivizes playing levels over and over until you’ve built up enough cash to buy enough HP to weather the damage. Still, the difficulty level in general isn’t all that high, especially compared to something like Gradius, so skilled shoot-em-up players probably won’t have to worry about this kind of repetition in order to beat the game. Still, the weapons, shields and items are priced so high that you’re not going to be able to afford everything you want on a single level run, even if you kill every enemy in the stage. So you either need to prioritize, or grind. To be fair, you can sell any equipment you’ve bought in order to recoup some of the money spend on old items or weapons you don’t like. 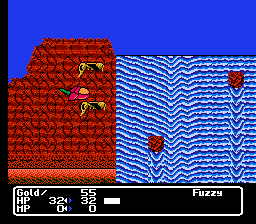 The password system proves to be another issue. Since they’re just simple four digit codes, it doesn’t accurately capture your goal or equipment. Instead, it just records the level you’re on, and then gives you a baseline amount of upgrades and gold to start the next stage with. This is an issue because each town sells different weapons, so you’ll end up being stuck with either whatever the game decided to give you, or whatever’s currently available. The final stage is even worse because the town is the same as the first level, only giving you access to the weakest weapons. As a result, it’s mostly useless, and it’s better to just start playing each game from scratch so you can fully customize to your liking.

The graphics are pretty average for an early 90s Famicom game, though it does use its status as an RPG to make for some innovative levels. There are a couple of typical outer-space levels, of course, but there’s also the fantasy-themed levels at the beginning, complete with some unique robotic enemy designs. Later levels include an “art” level, where you’re accosted by pencils and paintbrushes, as well as a level inside of a television. (“Our country was sucked into a television”, the king laments. “Watching TV is fun, being in a TV is a pain. We can’t even play Famicom games…”) The stage design is a little long and repetitive, but these help give the game some creative identity. The ship itself, which sort of looks like a mechanical manta ray in its initial form, is pretty unique looking too. 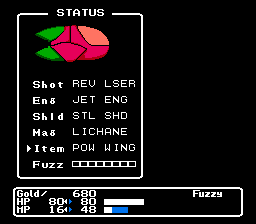 Beyond the RPG elements, Fuzzical Fighter has another gimmick going for it, which lies in the title. In the late 80s/early 90s, “fuzzy” was a buzzword in Japanese technology, often used when advertising appliances. The concept of fuzzy logic is a little difficult to explain outside of a math class, but in summary, it acts in contrast to binary logic, where an answer can either be “0” or “1”, while fuzzy logic dictates it can be varying values between those values. In practice, this often meant that devices would use some outside parameters (user preferences, the environment, etc.) to make its own decisions, basically acting as a simple form of artificial intelligence.

In the context of the game, this amounts to an autopilot, regrettably referred to as “FAPS”. You can upgrade your FP (“fuzzy points”) for your ship, and can set it to act in an offensive or defensive manner. All of this is rather vague, plus it’s buried within the equipment menu so it’s not like it’s something you can easily turn on or off. Plus, as expected, it doesn’t really work all that well – there’s lots of stuff it can’t dodge, plus it can’t fire either, leaving that task up to the player. The player’s movements are given priority so you can still pilot it, but it’ll be left to its own devices if you stay still. It’s an interesting implementation, and the concept was obviously used to help sell the game, but from a practical standpoint, it’s pretty useless. 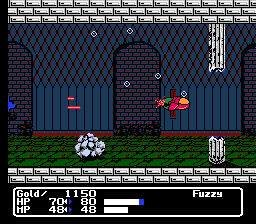 As with most of these genre experiments, Fuzzical Fighter can be kinda rough. While the RPG stuff seems innovative at the outset, considering each area only has a throne room and a town, it’s really just a fancy shell for an upgrade system, which has already been seen in other shooters like Sega’s Fantasy Zone. Which, given towards its pacing and attention towards in-game economy, didn’t suffer from any of the same issues. And the plot, while likeable and silly, is something that could’ve been told in standard cutscenes rather than just ripping off the style of Dragon Quest. The core shoot-em-up action is competent, though it feels a little boring compared to higher tier Famicom shooters like Over Horizon, Gun-Nac, or Crisis Force. Still, as with most of these innovative cases, there’s something to be admired for its ambition, even if it’s clear why very few other subsequent shooters took similar routes.