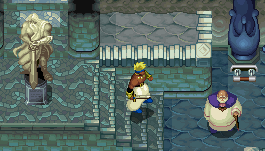 The Legend of Oasis is simultaneously a sequel and prequel to Beyond Oasis. It features more Spirits, more puzzles, and more weapon types – making it a clear successor to the Genesis original in terms of game mechanics . For the storyline, however, Ancient chose to reach into the dark past of their fantasy world and tell a tale of Ali’s ancestor, Leon. The game still takes place after the battle between Reharl and Agito, but it seems that Ali was not the first person to discover the Gold Armlet. We learn that Oasis is just a smaller portion of a land called Aquaria, and one of the regional elders named Ordan picks up the Gold Armlet out of a stream and gives it to our hero. Leon is a young villager who is apparently destined to become the next Spirit King, and Ordan sends him off in search of the various Spirit Shrines nestled around Aquaria in order to gather up his elemental subjects. 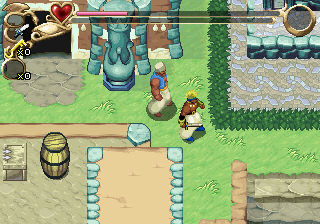 Things soon become more complicated as earthquakes begin to shake Aquaria. A dark-haired beauty named Myra appears in the village, stricken with a deathly illness and unable to talk. Many of the other villagers become sick as well, but Leon is able to use Dytto’s restorative powers to save their lives. Upon awakening, Myra claims to be a fortune teller, and she informs Leon of Agito’s existence and the path he must take to prevent the dark wizard’s resurrection. He sets out to recover several mystical Cubes that unlock the secrets of Agito’s weaknesses, but first he has to make it past Agito’s Silver Guardians – no easy task. 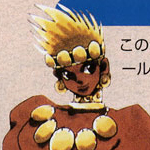 The next Spirit King of Oasis, trained by Ordan to be proficient in all fighting styles. We know less about Leon than we did about Ali – he’s an orphan, and that’s about it. He’s well-liked by everyone in the village and assumes his new role without complaint. 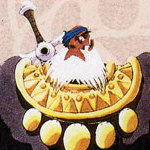 An old soldier and weapon master who adopted Leon after his parents died. He’s a respected elder in the village and packs a huge sword. He performs a mentor role similar to the King from the first game and gets Leon started on his quest. 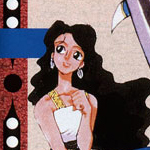 Her past is largely shrouded in mystery, but she knows a lot more about Agito than she’s letting on. As a love interest for Leon she’s basically just a damsel in distress. 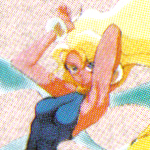 In Beyond Oasis, Dytto was something of a flying fire extinguisher. Her skill set has been broadened here to focus more on her healing abilities – she can still douse flames and freeze enemies, but her healing power now has an area of affect that can buff (or even resurrect) NPCs and plants as well as Leon. She can also bless Leon’s Rod weapon with the ability to release the souls of the undead – by far the best way to take on zombies and ghosts. 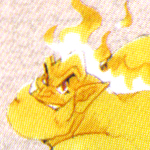 This flaming djinn is still your head bodyguard and ace skull cracker. Efreet can now bless your Large Sword with flame ability to solve puzzles and cut down certain obstructions. He can still be summoned from all the same environmental components – campfires, bombs, flaming enemies, etc. There are times, however, where he’s more trouble than he’s worth because his fire punch will actually give certain enemies and bosses back their lost health! 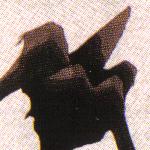 While Shade can still save you from falls, work switches, and reveal secrets, you’ll be pulling him out of the bag most often to deal with Thorns. Thorns seem to represent Agito’s limbs or general dark influence spreading throughout the heart of Aquaria, and standard weaponry and spirit attacks have little effect on them. They usually block you from getting to the next area and serve as locked doors with Shade being the key. Shade can also bless your Bow to give it extra damage against certain types of enemies. 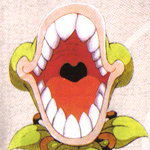 Translated as Bow in Beyond Oasis, Bawu is still a very hungry green plant and still pretty much worthless. One neat new power is the ability to bite at cracks in the ground to reveal secrets – you can find some pretty weird and trippy things in addition to the usual Spirit Gems and healing items. Bow can also give your sword a very special power that helps you cut through solid stone. But apart from specific puzzle applications he’s still too weak and attacks too slowly to be of any real use in combat. 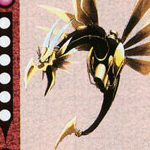 The new Spirit of Sound, an almost completely puzzle-oriented Spirit that takes over Bow’s spot for “least worthwhile” Spirit. His attacks don’t do much damage except against a few certain enemy types. He’s able to fashion an ultimate sword for Leon later in the game, though, so other weaknesses can be forgiven. He can buff Leon’s bows to have Iron Arrows that pierce stone, metals, and multiple enemies. 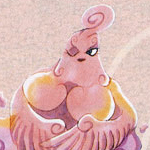 A Spirit of Air who’s primary task is to be a magic carpet. Holding down the A button for a few seconds allows Leon to jump on top of her back and float around, while tapping A will dish out lighting strikes on nearby enemies or puzzle objects. She can turn Leon’s Rod into a Wind Rod, which will send gusts of air moving across the screen when used – useful for nudging things off of high places. 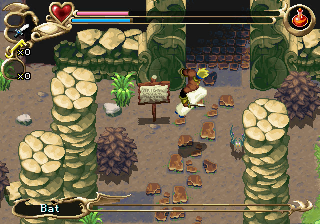 The Legend of Oasis does an admirable job of maintaining what story continuity there is in the series – suffice it to say that by the end of Legend you’ll know some interesting trivia about the Genesis original. The two new spirits are pretty unique designs to say the least – Airl resembles a Reddi-Whip Kirby and Brass turns into a trumpet during one of his special moves. They also add some equally unique special abilities. Leon can ride Airl like a magic carpet and use her lightning attacks to activate ancient machinery and robots, while Brass can liquidate objects into base components through resonance.

Ancient puts these extra possibilities to good use by expanding the game’s range of puzzles. Beyond Oasis usually had one-screen quandaries that required a single use of a Spirit or a particular jump to get past. In Legend of Oasis you’ll be tracking back and forth across big dungeons, cycling through all six Spirits in turn in order to make progress. It’s a good thing for people who thought the first game needed less action and more switches/jumping/doors, but it’s probably a downer for anyone who was attracted to the action-oriented styling of the first game. The dungeons have so many levels and there are so many combinations of Spirit powers and in-world elements that it can be mind boggling – you might have to resort to a FAQ once or twice. 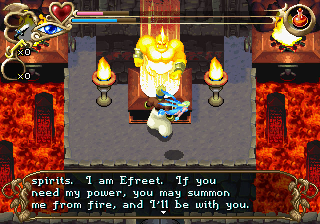 On the other hand, combat has been simplified to a degree. There are fewer combos to perform with your dagger (now called a short sword) and most of the weapons are more for puzzle solving than any real fighting application. The long sword and bombs are still around, but the bow has been changed from a crossbow to a longbow and can be aimed high or low. There is an all-new Rod weapon, but what’s interesting is that all the weapons other than the default Short Sword no longer have euses’ as they did in Beyond Oasis – once acquired they never break, so there is no weapon inventory. Instead the weapons have limited special powers. Your Spirits can now buff weapons with fire damage, holiness, piercing, and so on. Once buffed, you only get a certain number of special uses of the weapon, although the upper limit can be increased by collecting scrolls. All of this is rolled into (you guessed it!) puzzles more than anything else, as befits Legend‘s new focus on the thinking side of things.

There are a few other changes. Many of the enemies are now digitized models and seem washed out. Worse yet, they scale in size based on their health, meaning that enemies later in the game are a mass of huge pixels. It’s a definite loss when viewed against the inspired enemy art from the first game, and one wishes that Ancient hadn’t taken the mid-90s digitization bait so easily. It gives Legend more of a dated feel versus its predecessor. The environment art is still top-notch, however, and the areas once again blend into each other seamlessly – a good thing, because with two extra spirits and a bucketload of additional gems and weapon scrolls to collect you’ll be wandering all throughout Aquaria in search of a 100% save. 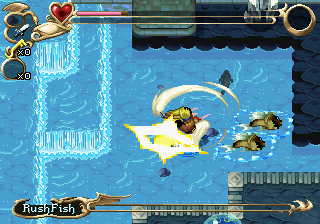 The Legend of Oasis never actually received an official OST release, which is unusual for a Yuzo Koshiro game. There were a few CD-Rs pressed for archival purposes and some copies have supposedly made their way into the hands of die-hard fans. Without an official pressing of the OST, listeners are forced to experience Koshiro’s vision through very compressed Saturn ADX native audio. Still, curious readers are best advised to download a 2004 unofficial release put out by a crew of enthusiasts. The score itself is strange stuff all around – similar to Beyond Oasis but even more abstract – although it’s said that Koshiro is quite proud of it.

If there’s a little bonus topic that is worth a mention, it’s the infamous “Seventh Spirit” mentioned in the back of the US instruction manual. Leon can be temporarily assisted on two occasions by friendly treasure box monsters called Tokipin and KOH. The game makes it pretty clear that they are “Spirits of Treasure”, complete with usage instructions and so forth. But a typo in the debug menu combined with some good old early-internet speculation has produced a fifteen-year old urban legend that there is yet another spirit hidden in the game. 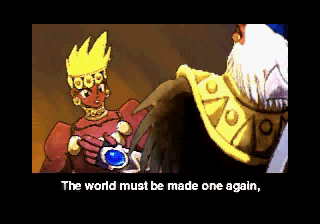 The Legend of Oasis is and probably always will be a Saturn exclusive. There’s no doubt it has its faults and is overly complicated at times, but it’s an essential purchase for fans of Beyond Oasis or anyone interested in a well thought out and largely unique Action RPG.