One of the more popular anime franchises in Japan of mid-eighties was Dirty Pair, starring two young women acting as mercenaries in a sci-fi setting. This naturally resulted in a Famicom Disk System game based on Project Eden movie. It didn’t turn out as a good one, which was to be expected from a licensed tie-in, particularly one published by Bandai. In 1986, however, a small company going by the name of dB-SOFT released Layla, heavily inspired by said anime series. 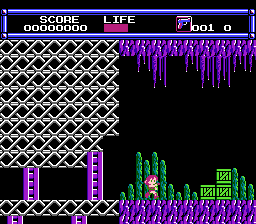 While Layla isn’t a fantastic game, it’s still quite an interesting release for a couple of reasons. It’s worth noting for being one of the first Famicom games explicitly featuring an action girl in place of a badass gun-toting commando.

As the story goes, an evil scientist Dr. Chinelkov Mantiokha wants to conquer Asteria space colony with his army of robots and mutants that is being assembled in his several asteroid fortresses. Layla and her partner Iris, 17-year old operatives are sent to deal with Mantiokha but soon Iris is missing in action. Layla’s task is to find Iris and foil Mantiokha’s evil scheme. The only story piece in the game itself is the ending sequence, written in glorious Engrish. 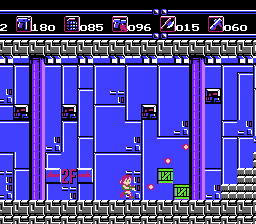 At first glance, Layla looks and plays like a typical platformer of the era. The player has to control eponymous heroine through eight asteroids, with every one of them being divided into a cavern and a fortress. While cavern sections follow the traditional “run to right and shoot things” pattern, the latter are more complicated. Fortress sections are comprised of several floors connected by elevator shafts, making up a maze, dB-SOFT didn’t market Layla as “maze action game” for nothing after all. There are barely any hints, so you’re better off figuring level layouts by trial-and-error or read some walkthrough. It’s easy to get lost in later asteroids, you might even get trapped in an endless corridor should you choose the wrong path. Each asteroid houses a password disk (granting you a continue password) and obviously a boss to beat. Collecting said disks is sadly mandatory, if you miss as much as one of them, you have to replay the level. Otherwise, the final boss will be impervious to your attacks.

Between the asteroids there are bonus stages which are shoot-em-up levels, and the only purpose of these is to rack up as much points as you can. This is the worst part of the game, since scoring has no real purpose. It would be much better if shooting all the space critters would yield something more useful. At least you get to ride a space bike, which is kind of cool. 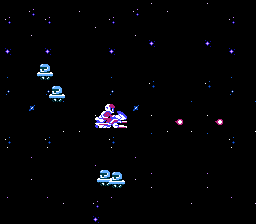 And speaking of something more useful, that would be the inventory. Being a game loosely based off an anime series featuring space gals with guns, it’s no wonder there’s quite an arsenal at Layla’s disposal, ranging from handguns to more powerful stuff. Unlike most action games of the 8-bit era, almost all guns have limited ammo, which is relatively unheard of in a shooting game from eighties. This element introduces some resource management to the game, forcing players to conserve their ammo rather than going guns blazing non-stop. The only weapon with unlimited ammo is the default handgun, which is weak on its own, but can be powered-up during the course of game.

Other pickups include roller skates, which increase speed, shields for protection (that are activated manually should the need arises) and a “special weapon” which doesn’t work well and is fairly useless, especially when it drains your health. All the items are acquired by destroying crates placed throughout levels, though some of them might be empty. Iris herself is a power-up of sorts – once rescued, she follows you, doubling firepower while obviously using up ammo much faster. Sadly, she’s mandatory for beating the game just like password disks are, but even then you wouldn’t last very long without her in last two asteroids. 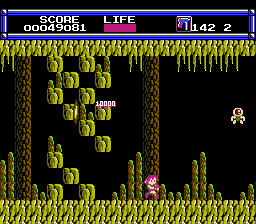 With a vast arsenal comes equally large roster of bad guys to shoot with it. Cavern sections almost always feature organic enemies varying from little critters that die upon one shot from a handgun to more nastier monsters residing in later asteroids. Unfortunately, there are enemies moving in sinusoidal pattern like dreaded, infamous Medusa Heads from Castlevania games, making them very hard to hit with your weapons. Fortresses on the other hand are populated with mechanical enemies vulnerable to rockets and grenades. Bosses aren’t much of a fuss and move in a simple, very predictable pattern, sometimes shooting projectiles at you. And if they are weak against the axe, it’s practically one-hit battle. The best thing about enemies is that they drop sweets upon being defeated. Because you know, cute teenage girls with guns surely do love life-restoring cakes and ice cream cones. Baddies are spawned in fixed locations, so it is wise to move the screen slowly to make them appear one by one, otherwise you might find yourself overwhelmed and suffer a swift defeat. Aside from enemies, some tiles in levels can be destroyed with your weapons or simply by bumping or running into them. These tiles do look the same as non-destructible tiles, so the only way to tell is just to shoot them.

The controls are standard for a Famicom platformer, but it’s the movement mechanics that might appear tricky. To crouch, you simply press down on the D-Pad without holding it, to do the opposite you got to press up. Crouching also affects jump height, and you’re going to do it so often you will have habit of crouching before jumping in other games of the genre. And what’s interesting, holding down the jump button makes Layla jump whenever she lands, which is useful in certain parts of the game. When stationary, pressing left or right slightly will only change the direction player character is facing. Also the air control is kind of sluggish and hard to control at times. 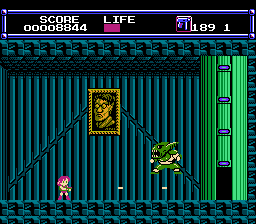 The audiovisual presentation of Layla is mediocre at best. The graphics are mostly bearable, though in fortress areas there’s too much blue in background tiles, which is not comfortable for eyes. Both Layla’s and Iris’ sprites look so cute and are easily the best when it comes to visuals. There’s even a little detail in form of different animations dependent on the weapon carried by characters, which is also a rare gimmick for its time. When the life bar drops to zero, their sprites turn into angels and fly upwards.

The audio, however, is just horrible. Upon launching the game, the player is treated to a high-pitched theme song, the cavern theme contains sounds that could be better used as in-game effects, and to add an insult to injury – the boss and bonus stage songs are so repetitive it hurts. The fortress theme is somewhat catchy, but it will also become boring after few loops. There are five tracks in total, so not much of a variety here. There’s also that annoying red flash and alarm when you’re low on health – the less health, the more frequent the effect is. 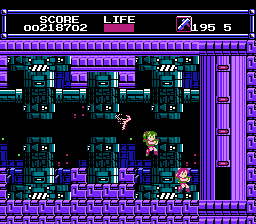 Layla has a reputation of a very hard game because of certain mechanics that don’t quite work. For starters, your health drains very quickly, with no invincibility time after damage, while having just one life at that. To make matters worse, from asteroid 4 onwards, not every single defeated enemy will drop a cake or ice cream, but every second one, making health recovery slower and requiring players to be even more careful. It gets easier once you manage to snatch a password disk and make it to the next asteroid, since upon death you are thrown back to title screen, where you simply push Select then Start to continue. Falling into pits doesn’t kill you instantly, but aside from taking health it does reduce all of your inventory by half, which is a serious setback once you stocked up on stuff. Unfortunately, in order to rescue Iris you have to go through one specific pit in asteroid 5 and you’re not safe from said consequences there. This also applies to switching between asteroids, possibly to prevent the player from farming inventory to the max.

Then there’s the way game forces you to progress – should you not scroll the screen for around 30 seconds, the game spawns a lethal, relentless tornado off-screen. Apparently folks at dB-SOFT knew that players will eventually try to destroy the tornado, and yes – it’s actually possible to do so by throwing grenades at it. This is of course very risky to pull off, but the game will reward you with full health for such a feat. 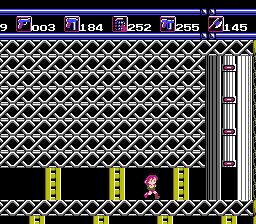 It’s highly doubtful if Layla would’ve caught on in America or Europe, given its overall design, production values and relatively low popularity of anime in said regions at the time. Some retro gamers, both Japanese and Western consider it a cult classic. There’s even an extensive fan-site out there (in Japanese only), and even a ROM hack. 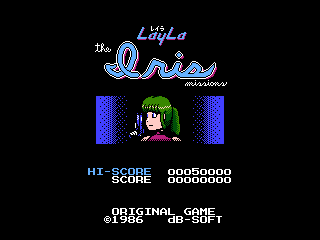 In 2017 a Romhacking.net user SupperTails66 released Layla: The Iris Missions – a complete overhaul of the original game. The author “liked the core gameplay” and thus took an effort to “modernize the experience”. It was rather a tough task since the game is virtually undocumented, unlike more popular ones. And the result takes the game to a whole new level. 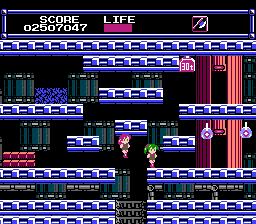 The hack contains a set of all-new nine levels (a secret one included) with individual gimmicks to them, a catchy soundtrack featuring much more music and a couple of gameplay tweaks. Gone are the pointless bonus stages and incredibly annoying tornado and your armament has infinite ammo (save for shields). Damage interval time was also extended so no cheap deaths here. You’re also not thrown back to title screen upon dying, but to a checkpoint within a level. Basically The Iris Missions is kind of an unofficial sequel that’s free of shortcomings of the original game, while still being a challenge. 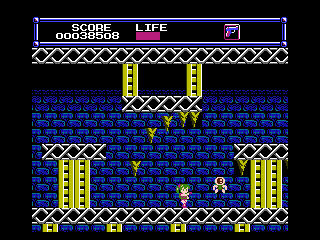 Big thanks to whoever runs “Layla no Asteria” fan-site and SupperTails66 for his work on The Iris Missions.

Links:
Layla no Asteria – an in-depth Japanese fan-site about the game, available in Japanese only.
Romhacking.net – IPS patch download for The Iris Missions