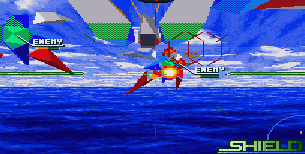 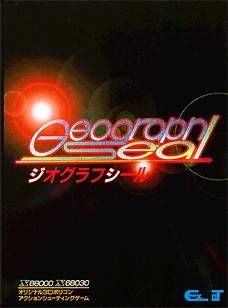 Geograph Seal was created by Exact for the Sharp X68000, a Japanese home computer renowned for its near-arcade graphics ability. It’s impossible to deny that this game is the progenitor for Jumping Flash! It has all the same elements: piloting a mecha who can triple jump (including the camera panning downward as you descend), a radar to find enemies, similar weapons, and on screen notations that mark targets and enemies. While Jumping Flash! is a platformer with FPS elements, Geograph Seal is an FPS with some platforming elements. 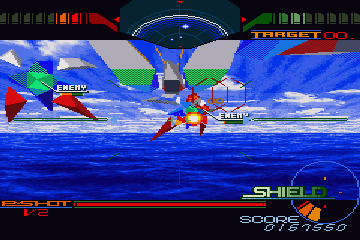 Geograph Seal handles identically to the first Jumping Flash! game, with clunky tank-like movement. You have four different weapons with wonderfully Engrishy names (Valcan, Laser, Horming and Riat) that you can switch between on the fly and that can be upgraded. Unlike Jumping Flash!, almost every object on the screen in labeled: enemies, targets, power-ups and bosses (if all the onscreen text isn’t your style, you can turn it off in the option menu). One strange omission: you are only allowed to access the pause menu while on the ground, so no mid-air weapon changes.

If Jumping Flash! proved how the engine was a little bit too robust for a platformer, Geograph Seal proves the opposite: it just isn’t well-suited for a fast paced action game. The screen is flooded with enemies from the moment the game starts (ships in the air, centurions, ground mechs, etc.) who are all gunning for the player. And it’s not uncommon for the enemies to hit the player if they stand still for more than a second. It’s a frentic game with quick moving enemies, but like the Jumping Flash! games, the player’s mech moves at the same relaxed gallop and has limited ability to change direction while jumping. But playing the first level is enjoyable, because as your health is copious and destroying all the enemies is fun. That is until you meet the first level boss. 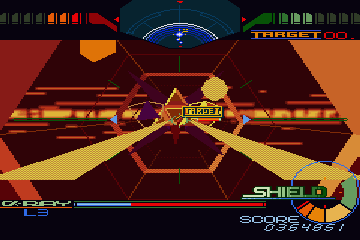 The boss is a monolith orbited by four orbs that shoot energy blasts. Of course the orbs are above the mechs. More annoying, the hit detection is pretty shoddy – blasts from the orbs that appear to pass harmlessly over the player’s mech actually hit it. There are one of two ways this enemy can be encountered: you can charge recklessly into the beast and attack each of the orbs by jumping on them or shoot at them, and hope that your health holds out (which it won’t) or you can hide behind one of the four pillars on the perimeter of the arena and fire-off homing missiles. The problem with this is that you will still be hit by energy blasts and the homing missiles only hit their targets sporadically. Of course, once the orbs are finished, the monolith itself shoots out energy beams that hit you behind the pillars. And again, the homing missiles are unreliable at best and do almost no damage. And if you attack the enemy directly, you’ll be destroyed in a matter of seconds. Simply put: a fun first level is destroyed by crappy boss design and annoying hit detection.

Geograph Seal has a distinct late 80s/early 90s cyberpunk feel to it. It’s entirely in English (including a garbled introduction), and has pulse-pounding electronic music. Really, it’s interesting to see Jumping Flash!‘s engine used with a different emphasis. In some ways the engine seems more suited for the run and gun style, rather than Jumping Flash!‘s laid back pace.