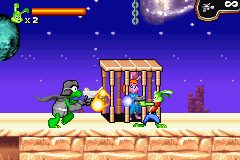 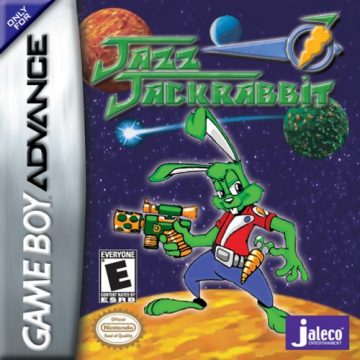 It had been a while since Jazz’s last game, four years in fact, and it seemed he had undeservedly ended up in the same obscurity that belonged to lesser mascots, like Socket and the seal from High Seas Havoc. The good news is that an attempt at the reboot of the series was made for the GBA. The bad news is that they might as well have not even bothered. The only real involvement Epic seemed to have had in this was putting their logo in the opening to the game, as it was developed by some unknown company called Game Titan. The publisher, out of all possible companies, was oddly enough, Jaleco.

Jazz himself was changed from a Rambo-esque mercenary to a more Han Solo-ish secret agent, and the villain this time around is a turtle named Dark Shell. There really should be some kind of rule of comedy that making a parody of a parody never works out. Whether Dark Shell is actually supposed to be Devan in a new outfit or not is never explained. Jazz is the only playable character this time around, although a weird looking Spaz makes a cameo appearance. There’s actually something of a plot this time around, with dialogue and cutscenes between words. The writing’s not mind-blowing, of course, but it’s appropriately goofy, with a few chuckle-worthy lines. 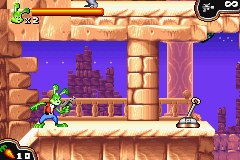 Jazz still has helicopter ears move from Jazz 2, and it’s much more important this time around now that Jazz can actually take fall damage. There are a few times when you’ll have to use this move to get up to a higher platform by activating it right before you hit the peak of your jump, which the game never explains to you at all. Jazz can also aim in shoot in all eight directions, both on the ground and in the air, which is pretty handy. Unfortunately, he’s also a bit floaty and slippery to control, which makes precision platforming a little tough at points.

The focus this time around is more on the guns instead of the speed, which was a smart move considering the GBA’s small screen size. Jazz now has to collect guns before he can use their ammo, which is a minor change, since there’s no separate ammo pickups, anyway. He also has a supply of carrot grenades he can toss with the L button, which are powerful, but are perfectly capable of blowing him up, too. A lot of the weapons can actually hurt Jazz if he’s not careful firing them, which doesn’t match the way you could spray projectiles all over the screen in the previous games at all. Jazz can also collect money scattered around the levels, and at the end of each planet is a shop where he can use the money he finds to buy weapons and extra lives.

The problem is most of the weapons are pretty boring to use. Aside from your standard blaster, which is much less useful this time around because of how little damage it does, the only really interesting weapon is the richochet gun, which fires metal balls that bounce of walls and 45 degree slopes. It’s also perfectly capable of hitting you in the face and damaging you. It’s nice that you can’t just breeze through the game for once with your default weapon alone, and all the other weapons so much more damage than the blaster that you’ll want to use them as much as you can. Oddly enough, having the bigger weapons equipped will slow Jazz down. You have to wonder why they needed this kind of realism was needed in a game about a cartoon rabbit who can hold six or so guns in his pocket.

However, you WILL need to use these weapons because the enemies can do so much damage to you. Most of them fire hitscan weapons at you, which drains away your life without much you can do to dodge it. Every level is more of a test of enduring enough damage to make it through without losing too many lives, especially since 1-Ups go for a ridiculous price in the shop. It does help you respawn right where you die when you lose a life, and the game saves itself at the end of each level, keeping track of your ammo and lives count. Although if you’re really low on lives, that can make things even tougher on you. 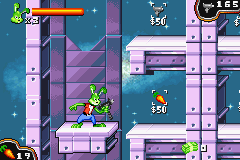 The level design is sparse and empty, and pretty much every level feels like the same routine of walking around, shooting enemies, finding keys, and pulling levers. There’s not really any real hazards or gimmicks to vary things, except for a few moving platforms and some spikes at the end of the game. All the levels tend to be pretty short, but they all feel like they play exactly the same, almost like you’re playing the same level with a new tileset. When your sewer level is your most interesting level, you’re really doing something wrong. At least the bosses are a little interesting, even if they tend to be pushovers.

The graphics are a mixed bag. The sprites are decent looking, if a little too large and chunky. The small screen size isn’t an issue, since Jazz doesn’t move as fast in the previous games. The problem is that each of the three levels on each of the five planets look more or less identical, and you’ll only be fighting one or two enemies throughout that entire level. The worst part is that they’ve even blatantly recycled some art from Jazz Jackrabbit 2. At least they acknowledged something from the previous games. The music is made from samples, so it automatically sounds better than 90% of the GBA’s music library, but it’s all very generic and lacks a suitably metal boss theme.

Jazz Jackrabbit on the GBA is a really mediocre game, and only worth playing if you absolutely must play every game in the series. It barely acknowledges its roots, the level design is static at best and monotonous at worst, and the difficulty curve just doesn’t know where it wants to be. There’s so many better platformers for the GBA, and much better games in the series. It’s nice that somebody wanted to bring the series back, but if they were going to put this little effort into it, they really shouldn’t have bothered.