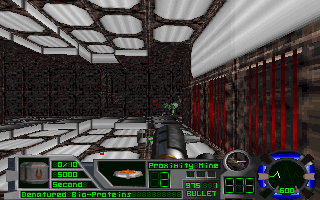 The success of Doom spawned many imitators, so many that a new genre had been defined, but in the early nineties such games were merely referred to as “Doom clones”. Most of these were also powered by the iD Tech 1 engine (like Heretic) or its predecessor from Wolfenstein 3D. Some of the classic two-and-a-half dimensional shooters had proven themselves to be quite fun even after  cutting-edge titles like Quake or Unreal were released. Mind Shear Software’s In Pursuit of Greed was one of those numerous examples that tried and miserably failed at being Doom‘s equal.

No wonder why, because as of 1995 standards it is a horribly outdated game in technical terms – bear in mind it was around the time when the Build engine was a fresh thing. According to designer Jeremy Stanton, Greed runs on a heavily modified alpha version of Doom‘s engine (aka the Raven Engine, also used in Shadowcaster). They couldn’t do better though, since budget for this game was virtually non-existent, with the engine provided by Softdisk as a part of publishing agreement, making it the only viable choice. Despite these shortcomings Greed manages to pull off a handful of interesting tricks such as sloped surfaces or the rear-view camera (the so-called “A.S.S. camera”), and most surprisingly, the player is able to jump. 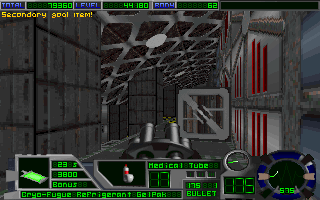 The story goes that in the very, very distant future of 15392 A.D. the inter-galactic empire of Sengzhac had fallen apart, leaving it to be taken over by crime syndicates, petty warlords and the like. The main source of entertainment is the Red Hunter casino which holds events known as Hunts in which participants called “Scavengers” are supposed to steal a designated item and return them to the Red Hunter, blasting anyone and anything that stands in the way of course. The player can choose a character before beginning their Hunt – a standard sci-fi cyborg, scantily-clad chick, lizardman, a weird-looking mutant and the “new and unique bovine character” – or just anthropomorphic cow mercenary (we’re not kidding you). Each of them have different stats and starting weapons, but the remainder of equipment, traditionally scattered all over every stage, is identical for all of them.

All the backstory is loosely explained in the readme file and never explicitly mentioned in the actual introductory sequence, which consists of badly animated CGI scenes that just reek of early 3D cheesiness. And so are the in-game character sprites, as opposed to pixel art or digitized scale models which could look much better. But it’s not visuals or technical quirks that make the game enjoyable in the end, so one could give graphics a pass given Mind Shear’s very limited financial resources. Interestingly enough, this game doesn’t feature gratuitous dismemberment typical of first person shooters from the nineties, there’s only blood splattering whenever an enemy is hit by your weapons. The HUD during gameplay is pretty inconsistent and looks like unreadable clutter and the most important part of it, the health meter takes the form of a fancy ECG animation, with the digits being smaller than those in the ammo or item counter.

What can’t be forgiven is the actual gameplay. Greed suffers from really wonky controls. For starters, while there’s a mouselook option just like in any other game of its kind, there’s no ability to strafe while holding the right mouse button. Secondly, some basic functions like the movement cannot be re-mapped to other keys, forcing the player to use left and right cursor keys for turning around.

Since your character is a Scavenger, the goal of every stage is to collect a primary goal item as well as the secondary ones – if you’re really willing to get them – and then finding the exit. Not much of a change from the genre’s standard formula. The game comprises three different worlds, each one of them containing about five levels of slaughter and item hunting. The design of the environments are very repetitive and thus confusing to navigate (even with the automap). Furthermore, none of the maps exploit aforementioned engine quirks in a way that would affect the gameplay, jumping feels useless in particular and it’s really janky to say the least, making reaching certain areas very difficult.

The gunplay isn’t particularly good either. On most difficulty settings you don’t even have to use a ranged weapon, going up close and personal with your melee weapon is sometimes the most effective option. Later in the game you encounter stronger enemies, but new guns to deal with them come up just as quickly. Unlike in most games of the era, weapons occupying the same slot have to be swapped, eg. your machine gun is tossed on the floor when picking up the rocket launcher and vice versa. It’s not that very annoying since your basic guns are more than enough to wipe the floor with enemies. As per genre’s tradition, you don’t get to keep your guns when advancing to the next episode. 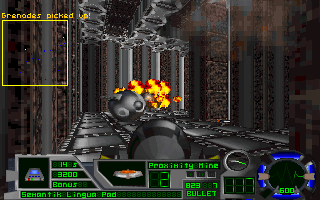 Aside from the arsenal, players can use numerous items to their advantage. High-explosive grenades can be useful for clearing rooms of enemies or temporary forcefields can be set up to hinder their movement. The most interesting of them all is the multiplayer-exclusive HoloSuit, which imitates nearby  surroundings, including other pickup items. Imagine being fragged in a deathmatch by supposedly a pack of ammo or medikit. Another curiosity are the item generators, which replenish random ammo or inventory pickups over time, a feature uncommon in the single player mode of most first person shooters to date, yet missing the point of conserving your resources, so you can go full Rambo on your foes and then resupply with no consequences, even if one of the level descriptions say otherwise. To balance things out, players are also provided with constant supply of cannon fodder.

Perhaps the best highlight of this game is the soundtrack, written by Andrew Sega, known also under his demoscene moniker “Necros”, who later joined the Straylight Productions team and  composed music for the Crusader series, Unreal, and before that he scored previous Mind Shear’s game IronSeed. As a matter of fact, Stanton himself admits that the music turned out to be better than the game proper, but several tracks just don’t fit whatever is happening on the screen, especially the intro song “Isotoxin”, which is quite a neat track on its own.

Interestingly enough, Greed was made compatible with the SimulEyes VR 3D goggles. These can be also used with critically-acclaimed titles such as Descent or System Shock. It’s kinda odd that Mind Shear team would add such a gimmick without polishing the core gameplay itself.

You’re a Scavenger, you’ve got a big gun and a reason to use it. But do you really want to play a game that was obsolete at its release with lots of other (and better) first-person shooters from that period around? Perhaps only if you have a historical interest in obscure FPS games, because In Pursuit of Greed is just as enjoyable as TekWar. To add insult to injury, the game was re-released (with minor changes) by Memorex Software in 1998 under the title Assasinators, just when players were enjoying excellent shooters in full 3D such as Quake II, Unreal and Half-Life. The source code became available to the public in 2014 but considering quality of the vanilla game there’s very little chance of anyone making mods or a source port.

http://www.redshadowsoftware.com/projects/greed – official download for the full version and source code