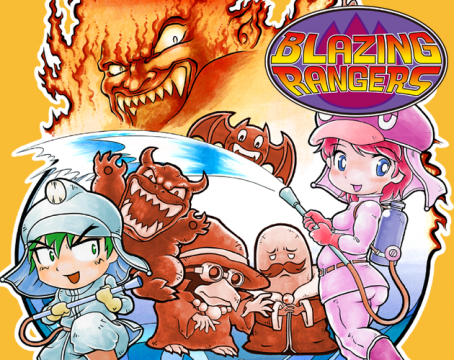 Karu_gamo is the developer behind the retro-styled indie hits Protect Me Knight for the Xbox 360 and its sequel Gotta Protectors for the 3DS, marrying a distinctive pixelated art style with unique game mechanics. They’ve entered into a new phase and created an actual 8-bit NES/Famicom game, Blazing Rangers, released in 2021, which falls firmly into the “fire rescue” subgenre of games including games like The Firemen and The Ignition Factor. Each stage is a single screen of a burning building, with the goal being to rescue all of the children and deliver them to the exit. Playing as rangers Popo or Mimi, you combat the ever-present blaze with a hose which will not only put out the fires but also kill any of the enemies that emerge from the flames. The catch is that the length of the hose is limited, so you can only carry it so far before you need to drop it. Thankfully, you’re not completely defenseless without it, as the heroic firefighters also carry a portable water squirter. However, it’s limited in water, so when it runs out, you need to stop for a moment to pump it back up. More importantly, it’s also far weaker – the hose can fire a stream that can extinguish a room in a few seconds, while the pistol can be used to create a path to walk through, but won’t hold the fire at bay for long. Most levels have extensions that will extend the hose an extra five squares, which aren’t necessary to beat the stage but sure make things easier.

Many stages also have locked doors, which can be opened with a consumable key. However, sometimes the fire might burn the walls around these doors anyway, so you may not even need them. Power-ups include a stronger water gun as well as a sprinkler, which will drop bits of water throughout the screen. There are also hidden diamonds that appear when you surround certain areas with your hose, which will grant an extra life if you collect four of them. Luckily, fire won’t directly kill any of the children, at least in the regular “Game A” difficulty mode. However, if you’ve collected any of them and die before returning them to safety, then they’ll perish along with you. Each level does have a time limit of a few minutes, but more pressing is the fact that the fire can spread through the level and quickly become out of control. If the time does run out, then it makes the spread even worse. Not only can it take down walls, but it also destroy your hose if it gets too close to the exit – this can have devastating consequences for the entire run, because once it’s gone, you can’t get it back for that stage, so you have to do your best with the portable pistol or else face a game over. What you’re carrying also determines how fast you move – you’ll get huge score bonuses for delivering several children to the exit at once, but it’ll also slow you down tremendously.

The harder “Game B” difficulty mode ramps up the pressure significantly. In “Game A”, the timer resets at the beginning of each stage, so you can take your time. In “Game B”, the timer carries over between levels, and is only replenished when rescuing children. To further complicate things, they can be burnt by the fire in this mode, which denies you extra time when rescuing them. Regardless of the difficulty mode, there’s also a whole lot that you need to keep track of, which can become a little overwhelming. You can never completely put out fires, only temporarily extinguish them to stop their spread. They can also pop up underneath you, turning your player a different color to alert you of the danger, so you need to move quickly or else you’ll get fried. Some enemies are simple enough to deal with, but a regular foe is a Lizard which not only takes quite a few hits to kill, but also fires out explosive fireballs that have a dangerous spread effect that will kill anything around it. Certain stages also have Bombbats that hover out of reach at the top of the screen, which regularly fires projectiles that weave back and forth, making them difficult to avoid if you’re anywhere near them. Tougher enemies appear as you progress through the levels, and there are even a couple of boss battles. Blazing Rangers supports two-players, and the game feels practically made for co-op, so you can spread the duties between the players – one taking charge of the hoses and clearing out the larger fires, while the other rescues everyone in the stage. The main characters have the same cutesy super deformed proportions as Karu_gamo’s other games. The music is provided by chiptune artist Hydden, using a sound similar to Natsume’s NES games like Shadow of the Ninja and SCAT. There’s not much music, but what’s there is pretty catchy.

There are thirty-two levels in total, with a handful of lives and limited credits, plus there’s no passwords, which means making it all the way to the end will be quite an achievement. The game uses a 32kb PRG + 8kb CHR ROM and doesn’t use any of the NES/FC memory mappers, so it feels like one of the earlier games in the system’s library, but it’s also significantly more complex than something like Ice Climber or Clu Clu Land. Rather, it feels like an early Namco title, something like Dig Dug II in particular, when the developers were really experimenting with some weird and interesting ideas, resulting in a game that simultaneously feels classic and novel.

The physical edition of Blazing Rangers has different regional variants with box artwork similar to the type you’d see in the 1980s marketplace. Just note that it’s only guaranteed to work on official NES systems, as third party and clone devices like the Sharp Twin Famicom and Polymega may not boot it.