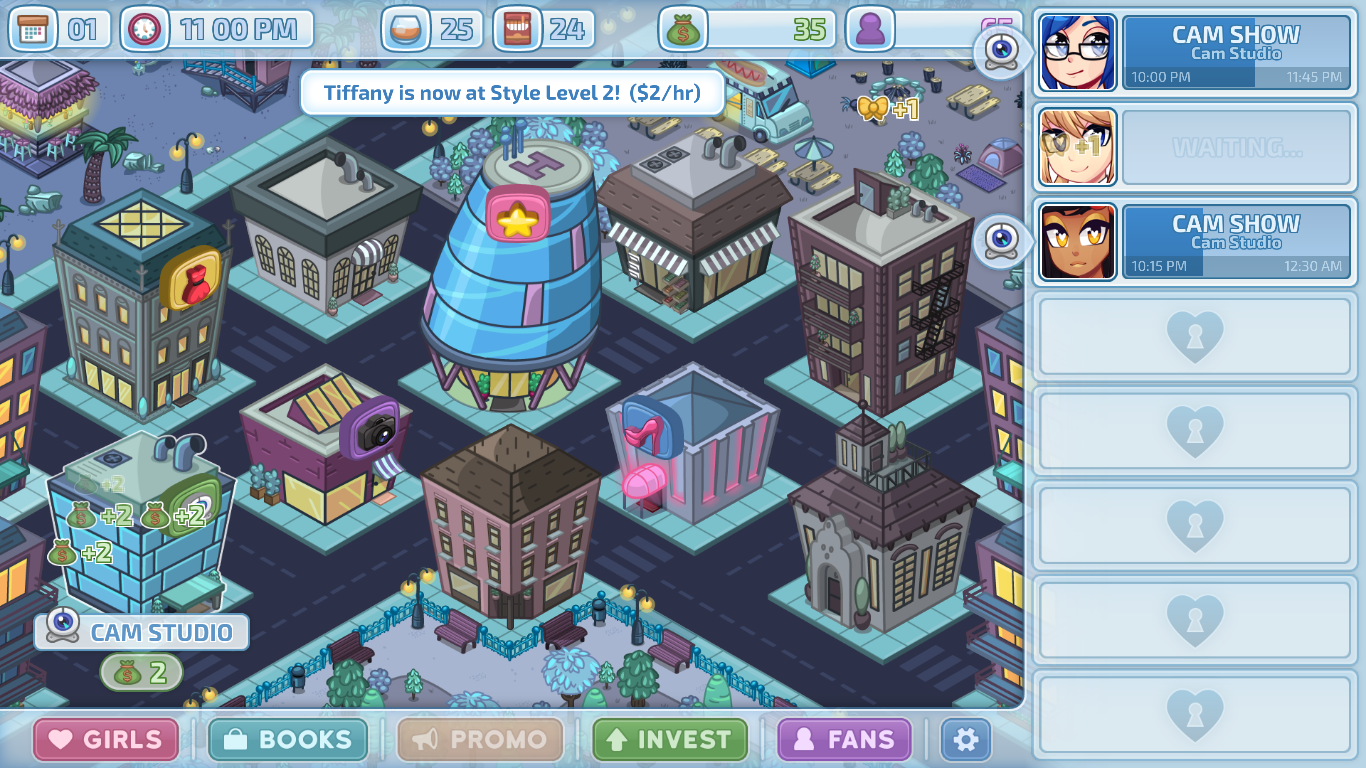 HuniePot’s follow up game, HunieCam Studio, was announced August 2015 and released just eight months later. This time around, they decided to tackle the world of tycoon games with the style of comedy they used in HuniePop, but with some changes in scope and style. The anime visuals were traded for a western toon style, and the game would be a much more low key affair, getting high attention for the previous game and its ravenous core fanbase. If HunieCam proves one thing, it’s that Koons key to success is not just his understanding of solid game design, but his ability to straddle the line between risque and offensive. 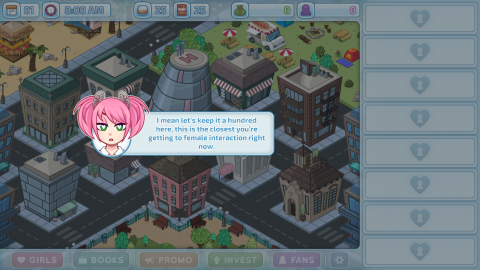 The game starts with Kyu, the ever obnoxious dudebro fairy girl of the last game, insulting you (because as established, she is Anonymous with a single form) and putting you in charge of running a cam show enterprise for twenty-two days, in which time you must gain as many fans as possible to earn trophies, plus coins from money earned. To do so, you have to scout and hire girls into your business (with the main set all returning alongside new, more stereotypical characters). You earn money per show based on how many fans the girl involved has, along with her talent level. To get more fans, you have to stage photo shoots, which adds fans based on the girl’s fashion level. Talent can be raised at the local strip club, and fashion is raised at the mall. 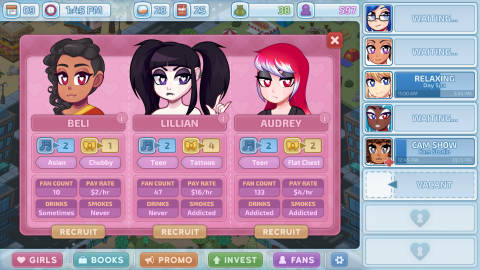 Of course, there’s a lot of complications. First, some girls smoke or drink, and while they tire out slower than others, they won’t do anything if you run out of cigarettes or alcohol. Thus, you have to keep stocked up at the two different stores on the map. When a girl gets too stressed to work, they have to spend some time at the spa to unwind. As you earn more money and fans, you’ll eventually be able to send girls out as escorts for far faster payouts, but this comes with risk. The other areas on the map are the agency where you can send your staff to recruit girls, and the “adult” store where one of your staff can pick up a random item. 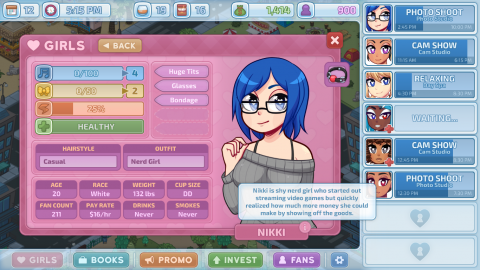 Items are important, because most add a different fetish to a girl’s appeal. Fans expect different fetishes, so different girls will get different pay outs based on fetishes. Focusing on fetishes and growing a broad staff with some reoccurring major fetishes can net you a lot of money. You can also increase each girl’s fanbase faster through buying ads, which acts far faster and much more effective than photo shoots. Along the way, you can also get items that allow staff to work longer or carry more stock from smoking or alcohol shops, buy upgrades that allow you to gather resources faster or hurry staff along by clicking on occupied areas (or you can simply hold a mouse button, a hugely welcome addition), and check your books and keep track of your employee’s salaries. Each girl has an hourly rate that increases as they gain more talent or fashion, and there’s a payout at the end of the day at midnight. If you hit the red and are still in it the next night, you lose, but as long as you get back in the green before then, you’re fine. 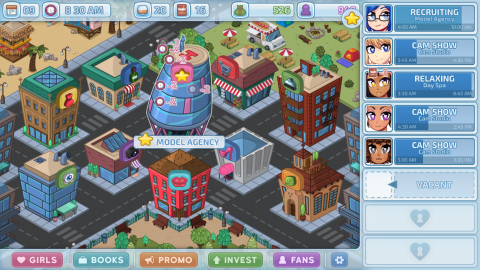 Yes, this is a game about running a cam show enterprise, but you may be wondering where that usual offensive HuniePop content is. Well don’t worry, it’s there, and it’s somehow even worse than last time. How? Oh, simple.

STDs are a mechanic, and you can end up giving one of your girls AIDS if you get unlucky on an escort job. Like in real life, it is incurable.

Yeah. They really put that in there. And no, it’s not funny. At all.

The penis trophies that grow more erect with each tier are childish compared to that little fact. There’s plenty of other STDs too, all limiting what your staff can do until cured. This is somehow even worse than the drinking mechanic from the last game. 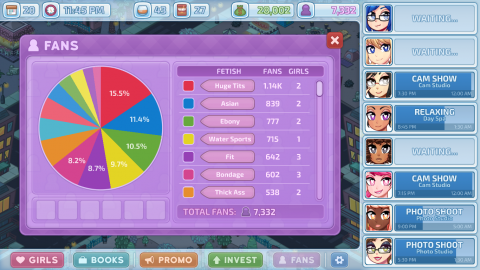 The presentation is tone deaf on the subject as well, but that’s not surprising when race becomes a fetish type. Seriously, you can appeal to pervert’s racist kinks with such fetishes as “Asian” and …”Ebony.” The other fetishes are all understandable and even a tad humorous (heh, cake farts), but that’s a legitimately creepy addition.

And this is where HuniePot starts to show what their greatest skill is. They know their target audience a little too well, tossing in all the disgusting, offensive stuff they like. At the same time, they also know to hold back just enough that they don’t scare off too many players outside the image board going demographic. Despite having more offensive elements here, HunieCam is technically more tame than HuniePop, with less explicit content and only suggestive CG as a reward for unlocking all of a girl’s hair styles and outfits. It also has a much sillier style that makes the chantastic writing style feel more appropriate, and even a tad clever at times. Kyu actually gets some good lines in her tutorial. It’s definitely offensive, but it doesn’t scare off as many as it could because there’s an awareness in its design to make the game palatable enough through addictive game design and tongue-in-cheek atmosphere.

It’s a little worrying that they’re able to release a game like this, with such crass and immature understanding of sexuality, to such success. They’ve carved out a strong fanbase, and generate enough buzz that they get purchases from those mildly curious from the circus around their advertising. Honestly, their advertising is a million times worse than the final game, with such lovely lines like “Up to 20 unique girls who don’t mind showing a little skin to pay off that liberal arts degree” and “Abandon your morals and die of a coke overdose.” Oh, and coke is indeed an item in this game. They’ve mastered the art of capitalizing sleaze like few in the gaming world ever had, and that’s both worthy of respect and disgust. 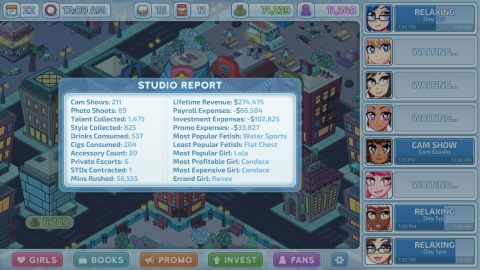 HunieCam Studio itself makes a sub-par tycoon game, though. It’s VERY short, and replay isn’t as strong as you’d expect. Once you figure out how to use one of your staff mainly for errands and how to abuse ads and fetishes, the game becomes insanely easy, though I’m sure they’ll make tweaks in the future. The new art style also makes getting CG a much less enticing proposition than last time. You get used to it pretty quickly, but it makes for poor erotic material. It’s not helped by how lazy the new girls are, including one that’s a Tumblr parody in all but name and a weeaboo in tacky sparkles. Of course, the other girls got a much more fleshed out game to get a chance to be actual characters, so that’s not too surprising. 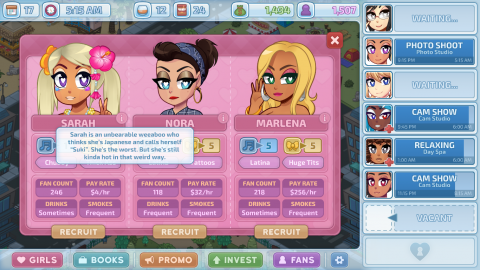 This one is cheaper, but you also get much less. You’re better off with HuniePop if you want a memorable, gross, yet addictive game. If you’ve already played that one, give HunieCam a shot if you’re curious. Everyone else can safely ignore this one and wait for the next game from the team, which hopefully will have a bit more substance. Not a bad game mechanically, just in the nature of good taste. But it’s Hunie, that’s to be expected.

Love it, hate it, at least respect them for being honest about being terrible.