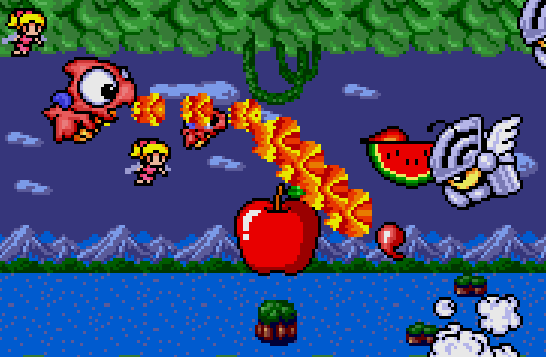 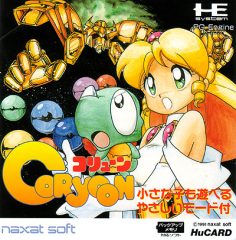 Naxat Soft’s Coryoon is a ridiculously cute little game. Right at the title screen, the protagonist, a tiny dragon, whose gigantic eyes take up approximately half of his body, holds up a sign, which acts as an option select. Each of the option menus is an opportunity to display a new piece of artwork showing the dragon and his beloved human princess. Even the title is silly – it’s just a cutesy way of saying “Child Dragon”, as the subtitle implies. The premise of the game, as shown in the introductory cutscenes, has this princess turned into a little girl by an evil magician, so the little dragon goes off to avenge her and remove her curse. 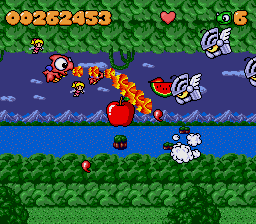 Coryoon is essentially the predecessor to Air Zonk for the PC Engine. The game looks, sounds, and plays very similarly, and feels closer to Air Zonk than the actual Air Zonk sequel. It was made by some of the same developers, many of who had worked on one of Naxat’s previous PCE shooters W-Ring. These include designer Yoshiharu Takaoka, programmer Yuuichi Ochiai (who would later move to Raizing to work on games like Battle Garegga), and musicians Hishashi Matsushita and Daisuke Morishima. The artwork was provided by Kenji “Moriken” Mori, who previously worked on Sunsoft titles like The Wing of Madoola, and would also illustrate the cover for Naxat’s later PC Engine shoot-em-up Burning Angel.

There isn’t any hazardous terrain to dodge, and most enemies fly in assembled groups and patterns, but the backgrounds are attractive, with several layers of parallax, and usually change a few times per level. The crux of Coryoon‘s scoring system revolves around collecting fruit. Every defeated enemy will drop something, ranging from apples to watermelons, each with different score values. They bounce at an arc and then drop to the bottom, so you need to be proactive to catch them, lest you miss out on some delicious points. It creates a dazzlingly bright experience, as the screen is constantly flooded with enemies, projectiles, and fruit… but at the same time, it can get a little overwhelming, especially in trying to pick out what will give you points and what will kill you. There is a cheat mode to remove the fruit, making it more manageable to discern things, but conversely you won’t get nearly as many points, and it’s really just not quite as much fun to play. The programming is also rock solid, as the game almost never slows down or flickers. 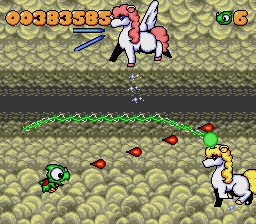 Power-ups are dropped via storks, who will drop color-coded eggs. Red grants fire, which does the most damage, as it blasts out in a consistent stream, but it doesn’t quite reach the entire length of the screen. Blue is the water attack, which functions like a laser, firing in a straight line and piercing through enemies. And yellow is a spread attack, shooting little lightning bolts all around, though they’re quite weak. Getting hit will cause you to lose your main weapon, reverting to your default attack, or will kill you if you don’t have anything equipped.

In addition to gaining power-ups through eggs, Coryoon can collect card suits for other special powers, which are dropped by gigantic chickens. The spade will give you a single-use screen-clearing bomb, the heart gives you tiny dragon helpers that can be held in position with the I button, the club is a magnet that will automatically attract fruit as long as you have the I button held down, and the diamond will shrink your sprite and hitbox. The fruit magnet is the most useful, as you can easily wrack up points when you have it equipped. 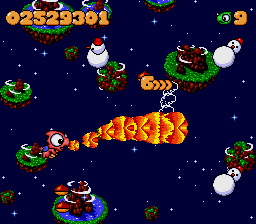 Each level has two bosses, some of which have multiple forms. The best of the mid-bosses is the cutest little Stegosaurus you’ll ever see, with other bad guys including completely non-intimidating foes like unicorns and turtles. Even the lobster boss looks far more cute than deadly.

Generally, Coryoon is a pretty easy game. If you even remotely pay attention to grabbing fruit, you’ll quickly rack up tons of extra lives. Plus the game is generous with handing out power-ups, and as long as you keep your eyes out for storks, you can power yourself up quickly. The game also supports saving your score if you have a CD-ROM or Tennokoe attachment, which also allows you to resume progress at any level you’ve reached. 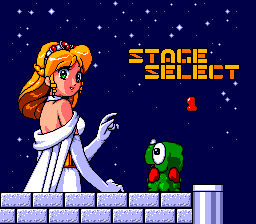 Coupled with the low level of difficulty and the adorable visuals, it’s clear that Coryoon was meant for younger shoot-em-up fans to enjoy. That might cause more experienced fans to turn up their nose at it, and even though it’s not nearly as replayable as some of the more challenging PC Engine games, it’s still a delightful, weird little experience. Even though it wasn’t released as part of Naxat’s Summer Carnival series, it does include two time attack modes for score running. 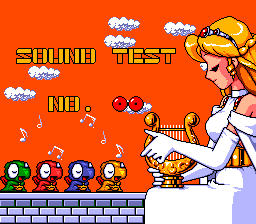 Coryoon has a lot in common with Magical Chase – they were both HuCards that were released quite awhile after most publishers had moved onto the CD-ROM platform, they’re both cute-em-ups, and they’re both exceedingly expensive. Magical Chase is the pricier of the two, and is generally more well known, probably because it got an American release. It’s hard to say which is better – Coryoon is a little easier, and while the peppy soundtrack doesn’t quite match up to Hitoshi Sakimoto and Masaharu Iwata’s masterful tunes, it’s still quite good. But visually Coryoon is one of the most colorful and attractive shooters on the PC Engine, right up next to Taito’s Hanataaka Daka?!