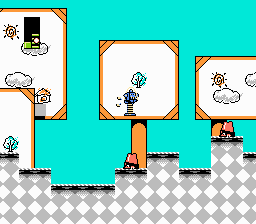 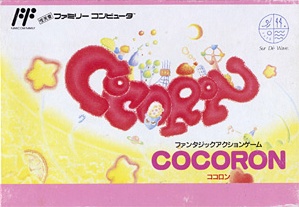 Cocoron feels like it was developed by someone who really loved Mega Man but believed that it never reached its full potential. Turns out it was directed by Akira Kitamura, planner and character designer of the original Mega Man. (The company he co-founded, Takeru, also made another Mega Man-like game called Little Samson AKA Seirei Densetsu Lickle). In Cocoron, instead of merely adopting weapons from enemies, you’re given the freedom to create your own character, literally out of spare parts.

You can, for example, stick the head of a Gundam on the body of Astro Boy (complete with jets in its shoes) and arm it with shurikens. Or stick a smiley face on a tank and give it boomerangs. Or a ninja Godzilla who can throw deadly baseballs. (Obviously, these are rip-off characters without any official licenses.) 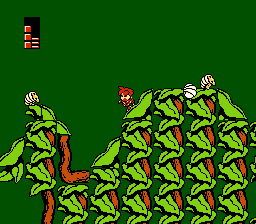 There are eight head types – Hero, Ninja, Robot, Alien, Fighter, Monster, Ghost, and the enigmatic Question Mark (a smiley face, a clown face, and a pumpkin head), each with three visual variations; eight body types – Armor, Wing, Jet, Cyborg, Boat, Buggy, Tank, and yet another Question Mark (this includes a cloud and a spring); and eight types of weapons – Parasol, Boomerang, Shuriken, Baseball, Pencil, Crystal, Flower, and Musical Notes. Your selection determines a number of skills, including their maximum HP, their speed, and of course, their abilities. You start the adventure assembling one of these heroes, and can make a new one after each boss fight. Once one is killed, you can choose to reuse them, or bring one of your new creations into battle.

The stage layout, too, is a bit unique, and frankly quite confusing. You’re presented with a map as the stage select screen, but you’re not choosing a level directly. Instead, each “stage” consists of an entrance section and an exit section, with a boss fight somewhere in the middle. Once you beat the boss, you must fight through the exit section, then the entrance section of the level you just picked. Sometimes you’ll go through extra segments, depending on the relative location of the places on the map. Sometimes you’ll go through the stages backwards. It’s all pretty confusing if you want to get a complete grasp on what stages you’re going through, but at the same time, it gives an unexpected, fluid feel to the game world, to make it seem like more than just points on a map screen. At any rate, once you travel across the map a few times and beat all of the bosses, you go on to the final level, which, much like Wily’s castle, consists of several linear stages, before fighting the final boss. 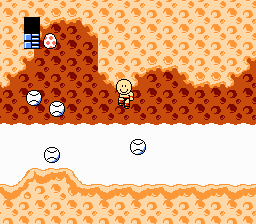 As a Mega Man clone, Cocoron is certainly more than competent. Some of the music even sounds suspiciously Capcom-like. But it’s also drastically unbalanced. Your weapon starts off incredibly weak, but by killing enemies and breaking the eggs they drop, you can eventually power-up into several different forms. It never loses strength, either, so once you’ve gone through a level or two, it’s fully powered-up and can completely wreck anything. Plus, health power-ups are frequent. So as long as you stop to kill everything, you shouldn’t have too much of a problem staying at full health. These issues would doom a lesser game to mediocrity, but Cocoron is so damned weird that it ultimately doesn’t matter.

The stages have no real unifying theme other than being levels in a video game (jungle level, castle level, underwater level made mostly out of milk and desserts, and so forth), but they’re filled with such random stuff – evil penguins and armadillos and fairies and elephants and moons – plus the one dragon that’s captured Santa Claus for some reason, and a king who attacks with suits of cards – that it’s hard to not be at least slightly amused. The game acknowledges the general weirdness by having you climb through the trees of a jungle and then the screen mysteriously fades into outer space, without much of any transition. Plus the whole game is narrated by what appears to be a blue tapir wearing pajamas who, in a halfway bizarre twist, is also the final enemy. The whole game actually lends itself to the feeling that you’re back in your childhood playing with a box full of toys, creating wacky scenarios with whatever assortment of figures (or parts of figures) your parents had bought for you. The only thing that’s missing is a Barbie doll in distress. (There is a kidnapped girl to be rescued – a fairy named Cocoron – but it’s really not the same thing.)

There were actually two ports/sequels to Cocoron in the works, both of which were apparently near enough completion to be reviewed, but neither came out. The Mega CD version (directly below) was known as Pop’n Land, while the PC Engine version (bottom row) was called PC Cocoron. These were probably canceled due to financial difficulties, as Takeru went out of business in 1994. There are a number of images taken from magazines which show the games to be similar to the Famicom original, though with improved visuals, and in the case of the Mega CD version, animated cutscenes.