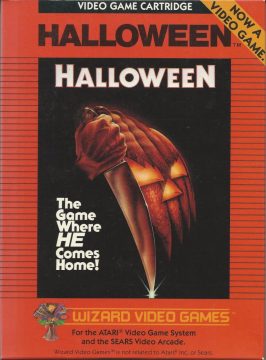 Movie tie-in games have always been somewhat of a crapshoot. Movies based on slasher flicks, even more so. Despite these movies having had their heyday in an era where their goriest scenes would never be allowed on consoles, there’s been a surprising number of attempts to put slasher movies into game form. This rendition of John Carpenter’s 1979 cult classic might be one of the first, but sadly, it starts off a trend of games that tend to be unique, but ultimately mediocre. It is, however, notable for being one of two Atari 2600 games to feature blood, something that caused a fair share of controversy during its release. It’s also more than a little out of season, having been released after the third movie in the franchise — the one that rather infamously didn’t even feature the primary antagonist of the series. 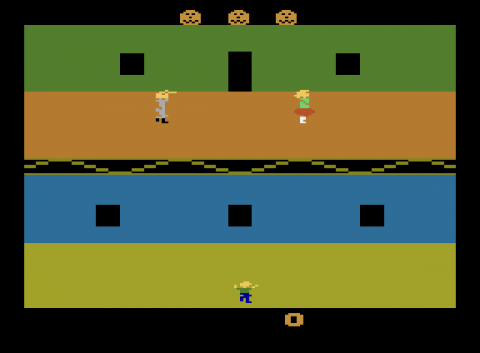 The game is based around the events that occur during the climax of the film, in which babysitter Laurie Stroud is being chased around her house by the psychotic killer, Michael Myers. (Interestingly, the game manual never refers to the characters by their names, instead using terms like “the babysitter”, “the killer”, and “the maniac”.) Your overall goal is to move across the two floors of Laurie’s house, find her endangered charges, and lead to one of the safe rooms on either end of each end of the house. Certain rooms also contain doorways that’ll bring Laurie to another floor, useful for quickly escaping Michael.

Michael will appear shortly after you enter a screen, either from a doorway or from either end of the screen. If Michael touches a child, he’ll kill them, leaving them bleeding out from their head. Rather brutal by the standards of the era, but not too punishing, since you’ll only lose time looking for another child to attempt to save. If he touches Laurie, however, she’ll be decapitated, running off screen as her neck stump spurts blood. This will cost you one of your three lives, and in typical Atari fashion, your failure is inevitable. The typical gameplay loop of an Atari game is even bleaker when you realize there’s no way to prevent your own grisly murder. 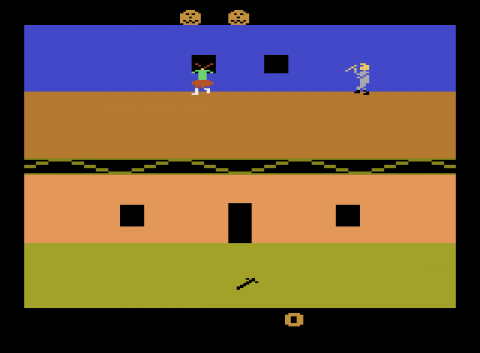 Occasionally, you’ll find a knife you can pick up and stab Michael with for bonus points. In typical slasher fashion, however, this will only make him retreat for a duration of a single screen. Unfortunately, actually picking up the knife is rarely all that useful – you can’t collect a child until you successfully stab Michael or die, and the timing to hit Michael is strict enough to border on random. A majority of the rooms also have blackouts, which makes the screen constantly flicker into darkness. These can be especially dangerous when you need to move around Michael to get to where you need to go, especially if you’ve got a child with you. 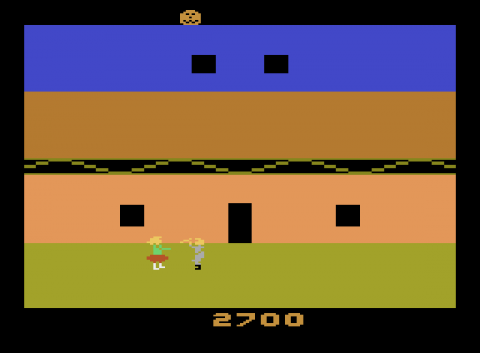 As you score more points, Michael starts to get faster and rooms will be more likely to have blackouts, but the general gameplay doesn’t change up much beyond that. Still, at rare points, the game can end up being surprisingly tense. You’re never entirely sure what direction Michael will approach, and the constant blackouts mean he only gets closer each time you get a brief glimpse of him. The tension is somewhat cut by the safe rooms, however, since Michael can’t ever enter them, giving you a chance to drop your joystick and fetch a snack. For the era the game was made, it’s a valiant attempt at representing the license.

Unfortunately, there’s a number of issues that hold the game back, making the game little more than a novelty. To have a child follow you, you have to tap the fire button. However, a very light press is required, or else you’ll quickly toggle between releasing and taking the child again and again – a real annoyance when Michael’s after you. The game also doesn’t have any difficulty or gameplay variations on offer, something that better regarded games on the system certainly had on offer. If it weren’t for issues like these, the game might fare far better, but as it stands, there’s just too much frustration to make it worth going for a score record. 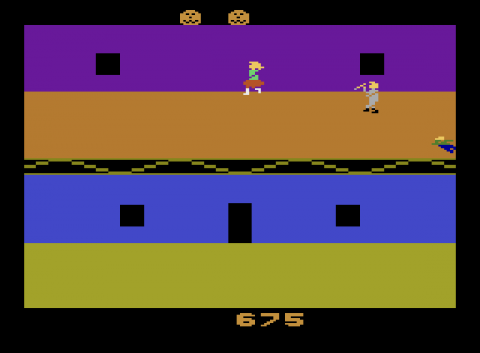 Graphically, the sprites are just large enough that you can tell what everything is, and the blood effect, as simplistic as it is, is well done. In one particularly nice touch, the film’s theme will start playing whenever Michael is on screen. It’s a little harsh on the ears, but it’s definitely recognizable, and makes for a nice touch. Overall, once you get past the novel idea and the brief controversy the game spawned, it’s rather mediocre, even by standards of the time. It is, however, worth playing at least once, just to see a different take on “Atari 2600 survival horror” than what Haunted House had on offer.