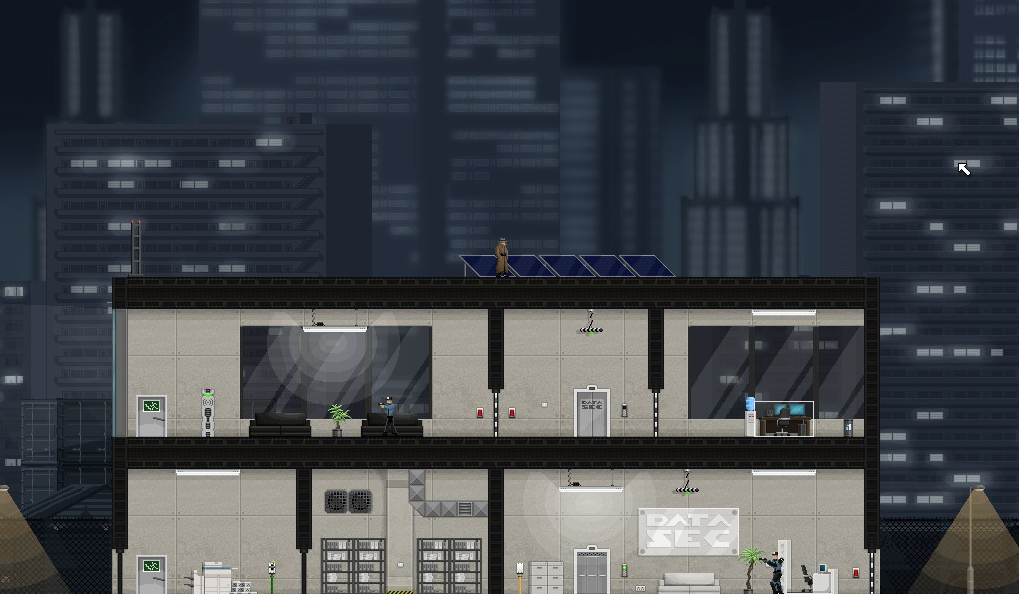 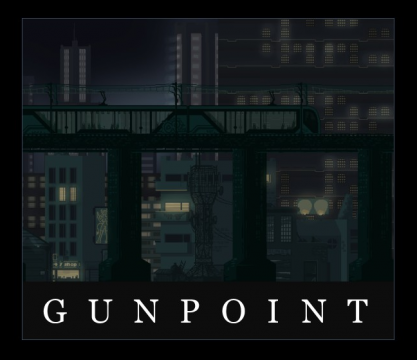 Gunpoint has one of the most satisfying origin stories that you will ever hear. Tom Francis was working as a section editor at PC Gamer UK magazine, and being surrounded by video games, he was quite good at spotting where they went wrong; most specifically in belittling the intelligence of the player by forcing them through a linear experience, rather than giving them the opportunity to solve a puzzle creatively, even in a way that he, the designer, may not have anticipated. Having heard that one of his favorite games, Spelunky, was designed by Derek Yu alone, Tom decided to try his hand at designing a video game of his own that would avoid the pitfalls he had spotted in other titles. And unlike every other person to have hastily thought “You know, I’ve played so many video games that I bet I could design a good one!” Tom actually could.

Tom’s initial idea for the game revolved around, in his own words, a “drunk, a**hole Inspector Gadget”, which also explains the initial title he chose; ‘Private Dick’. In just a month, he had a working prototype that he released for public feedback, and after polishing a few core mechanics, he asked for submissions from other artists to make the game more presentable, accepting help from John Roberts and Fabian Van Dommelon on artwork and Ryan Ike, Francisco Cerda and John Robert Matz on music. With his only development cost being the $30 he spent on Game Maker 8 (which he recouped within minutes upon offering pre-orders), Gunpoint is, comparatively speaking, probably one of the most profitable indie games to have ever been made.

The game opens with Richard Conway, freelance spy/hat-fancier/drunk, a**hole Inspector Gadget, being thrown out of a plate glass window, crashing into the side of a building, and then falling through the ceiling of the lobby, where he lies for a few seconds before the occupant of the building contacts him from the top floor to ask “Did you just get thrown out of a plate glass window?” to which Conway sheepishly replies “… No?” Luckily for you, this occupant is Selena Delgado, an employee of Rooke Firearms, who coincidentally was thinking about hiring you for a job and quickly buzzes you into the main building to meet her. Unluckily for you, while you’re on your way up, a mysterious man exits the elevator at the top floor, shoots Selena dead and flees the scene, leaving Conway with only one way of exiting the building, which involves walking directly past a security camera. Un-unluckily, the CEO of Rooke Firearms and Selena’s boss, Melanie Rooke, gets in touch with you shortly afterwards to say that she knows you didn’t commit the murder, and is willing to direct you to where the camera footage is backed up so that you can erase it before the police find it. Thus, your entry into the thrilling world of corporate espionage, data manipulation, and punching people several dozen times in the face is complete.

Oh, and it turns out that the reason Conway was thrown out of his own window in the first place is that he was trying out his new Bullfrog Projectile Trousers that allow their user to leap great distances, and, well… you get the idea. 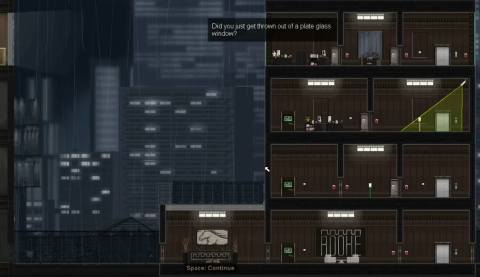 A lot of games like this would gently nudge you in the direction of stealth but not really penalize you for bursting in guns-blazing, but Tom Francis makes it very clear that this is not the optimal way to play. Conway dies from a single gunshot, and not only do you start the game without a gun, but if you buy one in the shop, firing a single bullet will start a very short countdown which ends with a police sniper arriving at the exit of the level, and while you can purchase an upgrade that occasionally forces people to miss their shots, you should never rely on it, as this will likely end most of your attempts at a level.

Conway is far from useless though, as the aforementioned Bullfrog Projectile Trousers allow him to leap great distances, cling to walls and ceilings, and fall from anywhere without getting hurt (although it does still make a comical ‘THWAP’ sound.) And speaking of ending attempts at a level, Gunpoint has a simple but very effective autosave system that prevents most of your frustrations by allowing you to reload a number of seconds before you died, and always offers you three choices in regards to how far back you’d like to go. The specific numbers vary, but they’re usually along the lines of 3 seconds, 9 seconds or 20 seconds, which translates to gameplay as “Would you like to rewind to just before you were killed, or before you embarked on the course of action that got you killed, or far enough back that you can pretend this entire sorry endeavor never occurred?” I’m sure that this system isn’t flawless, but I’ve completed the game four times and it never reloaded me into an inconvenient spot.

But what makes Gunpoint so unique is the Crosslink, an item you quickly acquire that allows you to see any object or mechanism in the game that you can interact with, and rewire it to suit your means. Can’t get past a locked door? Why not hook it up to a light switch so that you can open and close it at will? Worried about the guard upstairs? Rewire the security camera so that when you walk into its view, it turns all of the floor’s lights off. Heck, hook the door up to open the wrong way so that the next hapless sucker who tries to scan his way in ends up getting smacked in the face and knocking himself out. Your enemies range from helpless guards, who can be knocked out or simply punched unconscious (or as many times as you feel like punching them) to armored enforcers, who cannot be tackled or knocked down, and finally professionals, who can see in the dark and will shoot you even if held at gunpoint (holding an enemy at gunpoint unlocks an achievement named ‘Title Finally Relevant’.) 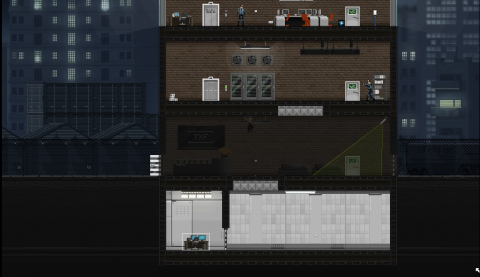 The humor is both constant and very well-written. A lot of games give you a choice regarding how you talk to the people around you, and while Gunpoint does the same, all paths lead to snark. Most of the characters you’ll interact with, even those who only exist as a group of pixels on the mission select screen, have sarcastic, humorous personalities, and speaking of the mission select screen, you have the option to double-cross a particularly angry and foul-mouthed client named Fritz Gessler, and if you do, he’ll send you a new mission request for which he’s offering a total payment of $0, simply named ‘Go f*** yourself’.

For all of its sarcasm, parody and self-referential humor, Gunpoint is very sincerely a film noir style game. Richard Conway is, after all, on a mission to prevent himself from being framed for a crime he didn’t commit, with the help of a classic femme fatale and a myriad of other interesting characters. If you take away his Bullfrog Projectile Trousers and the ability to stick the walls, Conway could easily be the protagonist of a classic Raymond Chandler novella. Gunpoint is clearly an expression of love for the genre moreso than a mean-spirited joke, as shown by the excellent jazz soundtrack. And this sincerity helps the game’s very few but by no means non-existent serious moments, including one late-game revelation that left me feeling as if I’d just jumped out of a fifth-story window myself.

With a level editor and a strong fanbase, new levels are frequently available for download, and while some criticized its relatively short length, Gunpoint remains one of the most successful indie games to have been worked on by such a small team. Tom Francis repeated his success with Heat Signature, a top-down stealth-action game released in 2017, and is currently working on Tactical Breach Wizards – think Into the Breach meets Dungeons and Dragons – and still pens articles for PC Gamer as a freelance writer.