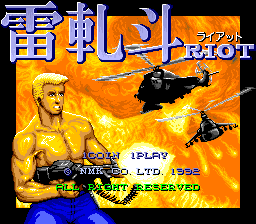 Originality isn’t always defined by how your game plays, but by how far you can take a concept and do absolutely everything you can with it. There are games that try, others that try harder, still others that try too hard, and then there’s Riot. Some games go overboard with their capacity for creativity at the risk of making no sense whatsoever, completely veering off into the realm of tangible sanity and ending up as mindshocking hodgepodges of confusion. And then, once again, there’s Riot, an unassuming scrolling high-octane action shooter that takes elements from both Contra and Cabal to come up with a deliciously memorable product. Rather, it would be memorable if it weren’t so incredibly obscure, released by the generally unknown company NMK who never had any big name products to their name. Still, regardless of clout, Riot just may be NMK’s most impressive game ever thanks to some of the most hilariously stupid stages and situations seen in anything. 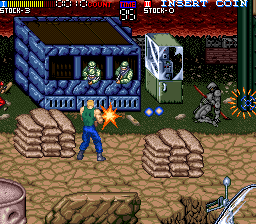 You play as… well, he’s unnamed, but he’s the basic blonde and beefy Arnold Schwarzenegger-ripoff military type. The hero takes up his gun and fights against the Magic Tigers, a terrorist group who lays siege to everything and must be stopped by any means necessary. That’s all there is to it, but who cares about the plot in these sorts of things (save for this game’s amazing ending, but that comes later). Riot is all shooting guys and backgrounds in a perspective similar to Cabal, where you control both your character and his gun cursor. A twist not seen in other games of this genre is that you are assaulted from both the background AND foreground, where larger sprites drop down to a plane just in front of the screen and shoot at or toss explosive at you; some such enemies even spit blow darts. Hence, you have two buttons, where one shoots at the background and the other expands the cursor to hit enemies in the foreground. 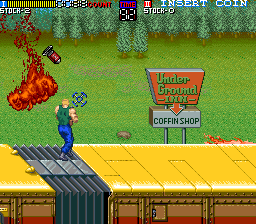 The action gets incredibly hectic when you have to manage multiple sides and dimensions of the screen, and in several cases, you can’t move on until you destroy every last enemy. Most stay at a distance and shoot or chuck explosives at you, with some moving up close to assault you personally. You can blow up floating bullet-shaped packages to gain pills which restore your lifebar, or you can get more powerful weapons such as shotguns, machine guns, and flamethrowers. You can take several hits before dying, but if you have to continue, you do so on the spot. That’s literally all there is to say about the game on paper, with three additional points to consider. 1: Unlike Cabal and its contemporaries, Riot lacks autofire and you must mash the fire button to generate each shot. This makes movement feel a bit stiff and awkward to manage, and the inability to hold down the fire button when you need to shoot constantly is arguably this game’s greatest fault. 2: This game is a brutal quarter-muncher, as were most games of the era, and it’s tough to survive for too long before you have to continue. 3: There’s two-player action to this game which curbs the difficulty somewhat, and Riot is definitely best enjoyed when you have a partner on hand, where one can focus mostly on background enemies and the other concentrates on the foreground. 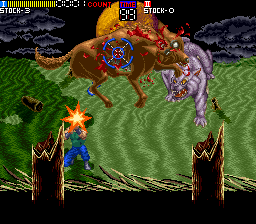 All things considered, besides the foreground assault gimmick, Riot plays pretty typically and would be relatively unremarkable were it not for the astounding setpieces which constitute the levels. This game is incredibly stream-of-consciousness in its design and gets dumber/awesomer the farther in you travel. Your hero(es) drops through the sky and hits four conveniently-placed tree branches on the way down, only to land in a shallow stream and not totally die. Then the rear fan of a hovercraft comes in soon after and blasts you over the waterfall, only for that plunge to send him sailing through four MORE tree branches and land on hard ground. You survive yet again for no good reason, and you also find yourself on the set of Indiana Jones and the Temple of Doom, with turban-clad guards trotting in to slash you with sabers and large moving spiked walls adorned with skeletons. That’s pretty screwy enough, but the second level involves yet another really gigantic fall, this time onto a moving train, which somehow houses a vest-donning gorilla with long arms and takes a lot of punishment. The third stage is surprisingly demure in comparison, though it has a pretty fun screen where you get to shoot out a lot of bar bottles. 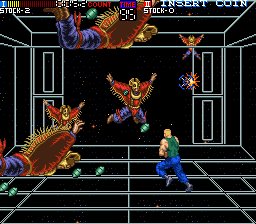 The fourth stage takes place entirely within a helicopter which zooms over a varied landscape going from the country to the city, and if you pay attention, you’ll notice the improbable gravity-copter is somehow able to tilt towards angles it shouldn’t be able to reach. All bets are off by the fifth stage, which is in a DEPARTMENT STORE of all things with enemies popping from behind cardboard cutouts and your protagonist rolling and smashing through glass panes. That danged fan from the first level appears to hurtle you down two long neon signs in a brutal stunt that would make Jackie Chan proud. The final level is short but no less insane, where you blow crap up in a zen garden only to slowly move down a hidden elevator infested with giant bugs, and spiked ceilings wait just outside the gate of the enemy leader. 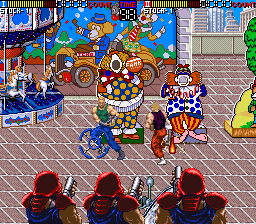 The real crown jewels of Riot‘s absurdity are the boss fights, naturally. You can already tell you’re in for a winner when the first boss, a robed goblin who resembles Yoda crossed with Satan, teleports you to a black-and-red sky with an ominous castle looming in the background as he summons mud golems to attack you. The end fights only get crazier from there, like this weirdo dressed akin to Hermes the messenger god backed up with four mafia-esque men and a bizarre statue which looks like a giant blob of flesh with human souls trying to escape. Then you get warped to outer space as “Hermes” floats around while winged demons fly in to spit energy bullets at you. Other such battles include the general who morphs into a giant wolf/bear thing and an octet of skydivers who grenade-spam you. The penultimate boss is a duo of sorcerers who bear a faint semblance to Finn the Human from Adventure Time, and they (of course) transport you to a strange void filled with floating stone lions. And the big bad himself? He summons a dragon to zap you with its laser eyes. Oh, and a giant skull floats in the space background because it’s evil. 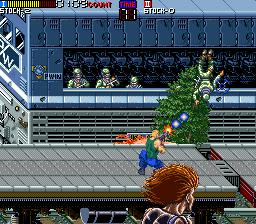 Your reward for killing the final bad guy is a ridiculously drawn-out death where he is skeletonized and evaporates like Donovan from the end of Indiana Jones and the Last Crusade. All that’s left is a red jeweled medallion which your hero… puts on a memorial cross before walking away? So was the bad guy your former friend or something who was perverted by darkness, or is this some sort of ritual the hero engages in out of habit? An evil face appears on the medallion and the screen fades to black… only to fade back in and show the cross stand up throughout the four seasons with various animals floating about it. Then the ground moves as to indicate the old cliché of the bad guy’s hand popping out to indicate that he’s not dead… oh, but wait, it’s just a mole who dives right back into the soil. And that’s it. THIS. GAME. MAKES. NO. SENSE. And that’s exactly why Riot deserves to be played, not just for what it is but how inane and insane it gets. You’ll never see a game this balls-to-the-wall today, full of machismo and nonsense that would make every critic’s eyeballs spin around in their brains until they explode. Riot may be a style-over-substance quarter-eater with ultimately shallow gameplay, but for what it is, it’s also an unforgettable game experience for anyone willing to turn their brains off and soak up the unhinged lunacy of it all.