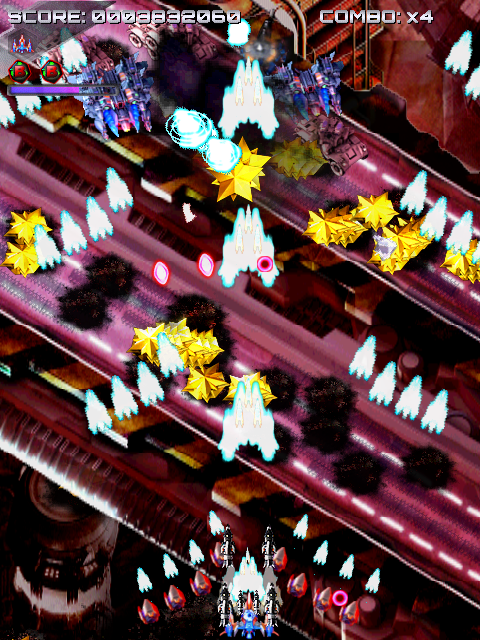 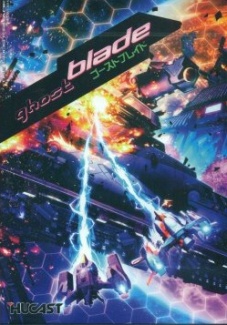 The Dreamcast has lived long after its official expiration date thanks to the efforts of a few indie developers. Most of the post-mortem releases have been shoot-em-ups, like Ghost Blade, from Hucast Games. Their previous game, DUX, (and its assorted revisions, like REDUX), was a sidescroller with roots in games like R-Type, but Ghost Blade is much closer to Cave shooters, right down to the three slender anime lady pilots who appear on the character select screen and in the artwork, but nowhere else.

The game pretty much plays the same way too, with three different colored ships with varied firing patterns. There are two shots, a rapid fire and a laser, along with a screen clearing bomb. The rapid fire has much wider range while the laser is more focused and powerful, while slowing your ship slightly for better maneuverability. Killing enemies with the laser yields grey orbs, which increases an extra gauge, granting you an extra bomb when it’s filled. The scoring system is also pretty straightforward, with a combo meter increasing as you take down enemies in succession and decreasing if you go for more than a second or two without killing anything. It’s not nearly as demanding as something like Dodonpachi. 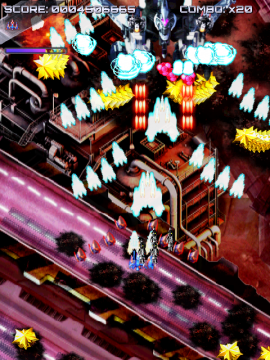 In fact, the game isn’t particularly demanding at all. There are two difficulty levels, Novice and Normal, but anyone who has any baseline skills with manic shoot-em-ups will find the normal mode to be a walk in the park – it doesn’t even get remotely taxing until about halfway through the game. The upside to this is that it’s a good entry point for those who haven’t bathed in the bullet mazes of Mushihime-sama or something like that, but some higher difficulty levels would’ve been nice.

The visuals, from the sprites to the backgrounds, are all high res (480i/p). The designs looks cool, but on a TV screen it looks rather muddy. There’s not much distinct about them either, though a few areas are inspired, like the cherry blossom trees floating in outer space. The music is supplied by Rafael Dyll, who’s provided other soundtracks to Japanese-inspired, European-developed shooters. It’s pretty typical shooter electronica, suitable for the game but hardly his best work compared to Last Hope or Söldner-X.

From a technical standpoint it’s a slight bit of a mess, at least in the Dreamcast version. Many shoot-em-ups have slowdown due to the massive amount of bullets on the screen, and players use that mechanic to their advantage to deal with the difficulty. Ghost Blade doesn’t just slow down, it regularly cuts the frame rate in half, resulting in a game that can get incredibly choppy in regular spurts. It gets even worse in tate mode, which is how the game should be played due to its vertical orientation. Chalk it up to the Dreamcast, a system from 1998, not quite having the horsepower to attempt a modern Cave-style shooter. The later HD re-release, published for Windows and the PlayStation 4, fixes these issues. 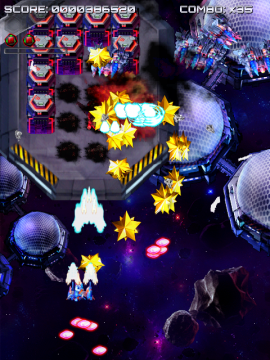 Ghost Blade isn’t terrible, but it is lacking in originality or refinement. There really isn’t a reason to play this over any Cave game or other, better doujin shooters on the PC, beyond having something new to play on the Dreamcast. When the game was initially revealed it was supposed to be a Caravan shooter, with short play session focusing on high score, like Hudson’s games back in the PC Engine era. Not only did the game shift gear during development, but the final release doesn’t even have an extra Caravan mode. Such a mode would have at least helped Ghost Blade stand out a little more. The Dreamcast comes in two editions – a regular release in a CD-style case, and a limited edition in a DVD case, which has different art and the soundtrack CD included.