Taking place two years after the original, Clock Tower 2 is the first game in the franchise to be released in the West, where it was renamed simply Clock Tower, causing a bit of confusion in the long run. It is a direct continuation of the first game, though it does recap its events in order to make sense of the madness.

After Jennifer’s narrow escape from the Barrows Mansion in the first game, she flees to Oslo, the nearest populated city. Alerting the locals about the massacre she just survived, the police and the news begin to swarm the mansion. One after the other the corpses of every victim parade through the manor’s door in front of the eyes of the surprised journalists, who create a whole media sensation: “The Scissorman Murders”. Roughly one year later, we find a new, more confident Jennifer Simpson, who now works under the wing of research assistant Helen Maxwell. Undergoing therapy, mostly to shed some light on the slaughter that happened at the manor, she finds herself constantly pestered by the renowned Professor Samuel Barton and his sneaky assistant Harris Chapman. Together they are becoming increasingly obsessed not only with the murders, but the Scissorman’s modus operandi, even keeping a dangerously real replica of the fabled shears he used to kill his victims. 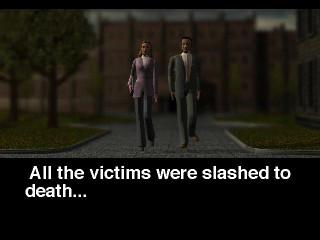 Suddenly, an unlikely survivor comes into play: a lively youngster named Edward. Now under the care of a woman plainly named “Kay” (who is implied to be staff from the Granite Orphanage where Jennifer had lived) was found among the pile of dead bodies inside of the mansion. He starts undergoing treatment himself in order to reveal his puzzling connection and sudden appearance in the middle of the “Scissorman Murders” case. 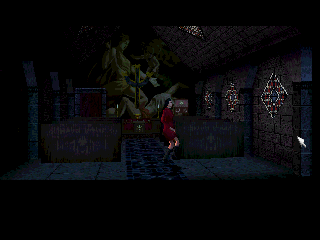 With the police’s Inspector Stan Gotts behind the case and news media hack Nolan Campbell creating a whole storm about it, the sensation resumes as an alleged copycat of the Scissorman starts to fill graves with all the people surrounding Jennifer. Forced to escape once again from the shear-wielding nightmare, she does everything in her power to uncover the whole story behind this new stalker and his ultimate intentions.

The point and click interface is back, and it features a rather clumsy item menu, which requires that you to drag the pointer to the upper edge of the screen to summon a drop-down inventory. This is compared to the SFC version, where you just pressed a button and the cursor automatically highlighted your goodies. The dialogue portraits are gone, the lower part of the screen is reserved for text (dialogue/prompts) and instead your current character’s health is seen as the color of the pointer – white (good), yellow (caution) and red (danger). When entering “Panic Mode”, the cursor will blink in red/blue tones, urging you to mash the Panic Button or find something on the screen to help you escape death.

Among the new features, for the first time you will be allowed to play as several different characters. Certain decisions in-game will prompt you to play two different storylines with two different heroines: Jennifer Simpson or Helen Maxwell. Their plots are broken down into “Intermissions” and “Scenarios”. The “Intermissions” serve as plot development, as you interact with a map of your current location in Norway, with several points of interest for you to visit to find clues and speak with other characters, among other things that will further shape the outcome into one of the 10 possible endings. Unfortunately, these sections often tend to be confusing, as it’s not always clear what you need to accomplish in order to move on with the game, so you need to tediously try and retry different actions until you proceed.

Then, there are “Scenarios”, which is where the actions occurs. The game goes back to the basics, as you scavenge through the levels while surviving a gauntlet of traps and avoiding the fabled Scissorman. It’s worth mentioning that this is also the first Clock Tower where you can use firearms against their stalkers. The copycats will be wounded, but the REAL Scissorman is impervious to bullets. There are other violent methods to counter his assaults (such as hitting him with a broom or tricking him into pits), but finding sanctuary is still the most effective way of driving him off.

Unfortunately, being on a new platform at the beginning of the generation, Clock Tower adapted to the PlayStation by updating its carefully crafted sprites into blocky polygonal messes. The camera is often set at a side-view perspective, to emulate the first game’s 2D feel, making it easier for the player to scan the area for hotspots and items. Other times, the camera rotates and shifts dynamically in order to highlight new spots or give the impression of depth.

Just like the FMVs in the updated version of First Fear, the cutscenes are incredibly basic, with blocky characters (who barely look like their in-game counterparts apart from their hair and clothes) and extremely wooden motions. It is worth mentioning again that there are NO portraits of anyone anymore, so you’re left to recognize every character by their 3D model.

On the other hand, the PlayStation is also stronger in the sound department, and Kaori Takazoe from the previous game returned for the sound design. From the intro sequence all the way to the climax, the game’s identity stands strongly, with familiar cues and proper effects for each situation. The Scissorman has now two themes: the “Shiver” theme that plays when he appears suddenly, and the “Reprise”, which starts when you’ve been hanging around for too long and the game “punishes” you by randomly spawning the stalker to force you to keep moving. The voice acting, predictably, is subpar, giving a B-movie likeness most times when it’s not downright wooden and raising some eyebrows over how silly it can become (Jennifer will get “Assistant” Inspector Gotts’ title wrong only so many times it becomes a running gag), but generally has a charm of fitting of an early 32-bit survival horror game.

Altogether, Clock Tower 2 has better music, larger body count and a more elaborate plot that gives the false impression of closure. Still, the game has lost some of the cryptic plot elements and random flashes of creativity that made the first one so unique, in exchange for a more developed but straightforward experience. With this said, it isn’t a bad game by any means, but its shortcomings will probably drive players back to the first game as a severe reminder of who’s still the mother of survival horror games.