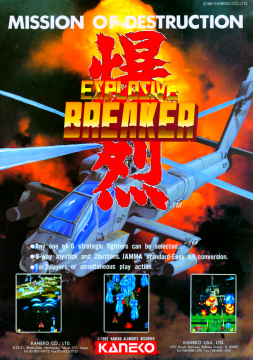 Kaneko was one of the those mid-tier game development companies that was mostly known for their softcore Qix clone Gals Panic, as well as assorted other offbeat games like DJ Boy and Shogun Warriors. But they also had a brief period of success with unironically decent shoot-em-ups, having worked with Hudson on various PC Engine games like Super Star Soldier and Star Parodier (and later doing Nexzr with Naxat), as well as the fairly decent arcade/Genesis/TG16 shooter Air Buster and the 1998 arcade shooter Cyvern. 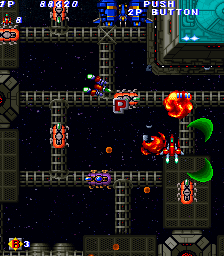 Somewhere wedged in between there is the peculiar Explosive Breaker, which at first seems like a fairly standard Toaplan/Raiden-style vertical shoot-em-up. You choose from one of eight ships, each with their own main weapon type and bomb. Having been released in 1992, it follows an early trend by assigning pilot names and portraits to each of the ships. Among the humans is a lizard and what appears to be a robotic samurai. though weirdly, outside of the select screen, these are never seen nor referenced again.  (Even when you continue and are given the option to select a new ship, it just presents the name of their weapon.)  Your chosen ship’s main weapon – Spread Gun, Laser Sword, Wave, Fire, G. Laser, and Regular – is strengthened by power-ups, while there are four types of subweapons – Missile, Homing, Cracking, and Shotgun. The bombs are similar to Truxton, where they have big, cool designs on them, but the most interesting one seems to summon a spirit like Dio from Jojo’s Bizarre Adventure, which issues a torrent of “ora ora ora”-type rapid punches up through the screen. It’s pretty strange. 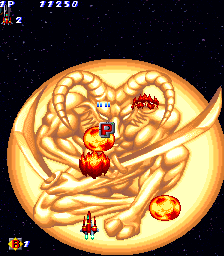 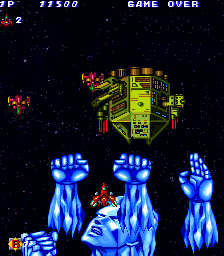 But that’s just one of the clues that something is weird about this game. The first stage seems very typical from the outset, until about a minute or two in, you may encounter a flying pirate ship, whose sails become birds and then attack you, or you may happen upon a locomotive, just chugging past the screen. (The specifics differ from game to game.) You might think it’s a casual hallucination or something, but just a little while later, you’ll fight a helicopter. Not a space helicopter. Just a helicopter. 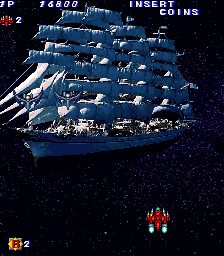 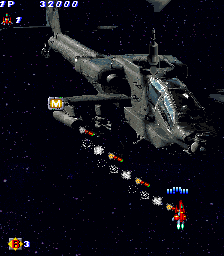 Disregarding the obvious anachronisms, there are several things wrong with these. For starters, these things are only barely animated – they’re literally just a digitized image that floats around the screen. Most of the rest of the sprites and images in this game consist of regular pixel artwork, so it seems completely disconnected from everything around it. And then there’s the sense of scale, where, for example, if you consider that the size of your ship is probably about the size of a military fighter aircraft, then this particular helicopter is about the size of a twenty times the size of it. There are other images like this that you fight too, including a jet fighter, and an aircraft carrier (where the size makes a little more sense). In a few of these, there are enemy creatures that burst out of them (rendered in pixels, of course), seemingly implying that the aliens have overtaken Earth military technology and are using them against it, but it doesn’t explain how baffling it all looks. Plus, while most of the enemies are standard ships and mecha types, later ones have a mutant, biological theme. But they look kinda strange, displaying none of the skill when compared to something from Irem, like R-Type. Altogether, Explosive Breaker feels like a few designers were locked in cages without any form of communication, banged a bunch of random stuff out, and then got together and did their best at making something cohesive out of it. Of course, they completely failed. 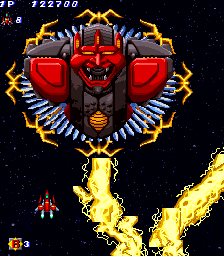 But that’s actually the best part about Explosive Breaker. The game isn’t bad, but otherwise there’s nothing really that special about it. The weapon variety is fun (though having to die to change your gun is annoying), though it’s from the early days of vertical shooters where there’s no rapid fire, making it fairly difficult. There are definitely many more other more enjoyable vertical shooters from the era, but the surreal nature gives it some kind of notoriety among fans of weird-as-heck shoot-em-ups and the small handful of Kaneko admirers.