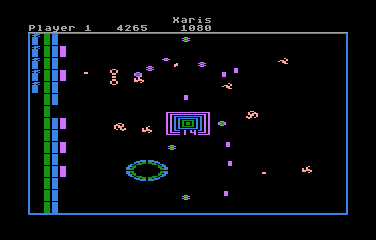 Between their arcade and console divisions, Atari left a multitude of unreleased games across gaming history. Far too many of these have been lost, either due to greedy collectors, or simply just having been forgotten. Sometimes, however, one of these lost games slip through the cracks, and we’re all rewarded with a potential classic that didn’t get the chance it needed. Xari Arena was one of these games, a game that was just about ready for release for Atari’s somewhat unloved 5200, but never managed to reach store shelves. It’s a real shame, too, because what we have is an addictive, unique game that would have probably done well in arcade of its time. 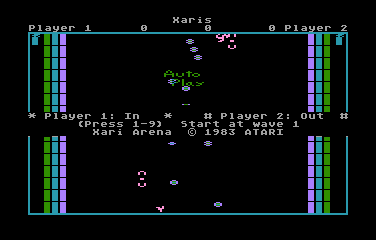 If there’s one game that this could be compared to, it might be Breakout, or at least its opposite world counterpart. You and another potential player both control paddles, and each player has several rows of bricks on their side of the screen. (You can also have an AI take the role of one or both players, and surprisingly, it can hold its own pretty well.) The surprise, however, is that you’re trying to protect your bricks from being destroyed, and should ever lose them all, it’s game over. Instead, your goal of each of the 32 waves is to destroy all the Xaris, the little amoeba-like spheres that crawl around the screen. Meanwhile, fireballs constantly spawn in, and should they bypass your paddle, they’ll start to take out your valuable bricks.

Fireballs can either be collected or deflected, depending on if you’re holding down the button that closes your paddle up. You can only hold five fireballs at once, and trying to collect more than that will just have them bounce off. Once you have some fireballs, your next goal is to destroy the Xaris by moving your paddle over them. It takes one fireball to destroy one Xari, so it’s always best to make sure you’ve got a good stuck before you charge into a group of Xaris. If you hit a Xari without having any fireballs in stock, your paddle will become stunned, and won’t be able to touch anything for a few seconds. 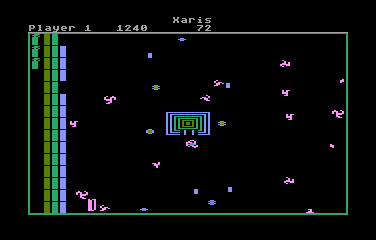 Once you clear all the Xaris from the board, you’ll get all your bricks back and get sent to the next wave. Each wave you clear will also give you one use of a fire extinguisher, which can be activated with the second fire button. Each use of a fire extinguisher will create a temporary shield around your bricks that’ll destroy any fireballs that come into contact with it. In the later waves, when you’ll often have fireballs go behind your bricks and start taking out massive chunks of them, hanging onto these becomes vital to staying alive. On the harder waves, however, you’ll probably end up going through your extinguishers pretty quickly, so it’s important to know when you’ll actually need them, instead of just using them out of panic.

The first few waves are fairly simple, and do a good job of showing how the general flow of the game goes. The difficulty picks up quickly, however, and eventually, so many fireballs spawn at once that keeping track of all of them becomes nearly impossible. Once too many fireballs slip behind your bricks, it’s easy for your supply to get devastated in a near instant, bringing a very quick end to your game. The difficulty curve is just even enough that it never feels unfair, however, and it makes for the kind of game you’ll want to jump right back into for another round. The fact that you can start from any of the first nine waves is also very helpful, letting you decide just exactly where on the curve you want to be on. 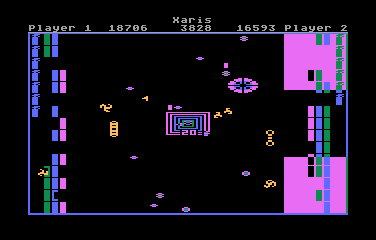 Despite the game’s unreleased status, the presentation still manages to be very impressive for a 5200 game. The neon coloring adds a lot to the simplistic graphics without ever becoming too distracting, and the game’s main theme is surprisingly infectious. There’s also some nice extra touches, like the intermissions of the Xaris performing a “dance” that you’ll see every so often, or the fact that the little creatures have their own score that they earn when they destroy your bricks. Even the little blues-y jingle that plays when your game ends is surprisingly well composed. It’s a lot of effort that really makes the game stand out, and definitely helps it stack up against the games you’d find in an arcade of the time. The only real issue is the game can slow down when the action gets particularly hectic, but given the age of the hardware, this is forgivable.

The video game crash that the American console industry suffered has a lot to answer form, but Xari Arena might just be one of its biggest victims. If it had actually seen release, it’s almost certain that it’d be sort of game that’d still be getting imitators and remakes alike. Sadly, the fact that it was never released crushed those ambitions, so it’s lucky that such a game managed to end up in a playable form at all. However you end up playing it, whether through emulation or through an actual console, it’s a game that’s definitely worth holding up along with such hallowed classics as Asteroids or Missile Command.

In March 2018, Xari Arena finally saw release outside the word of emulation on the Atari Flashback Classics Volume 3 collection, released for the XBOX One and PS4. In November of the year after, PC users would receive it as DLC for the Atari Vault collection on Steam. While it makes for an easier method of playing the game than fiddling with Atari 5200 emulation, it also suffers from sound that seems to be seriously off tune, which can quickly become grating. Still, the $5 price tag for the DLC is almost worth the cost of the game alone.

More information on the game, including an earlier version with different gameplay.