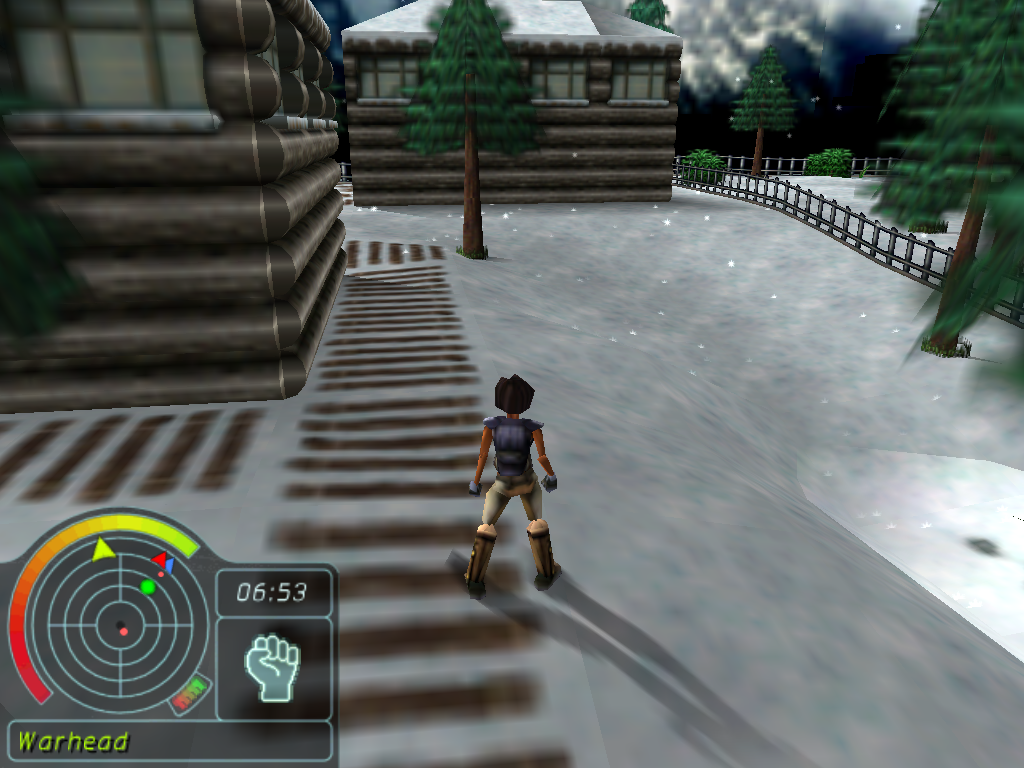 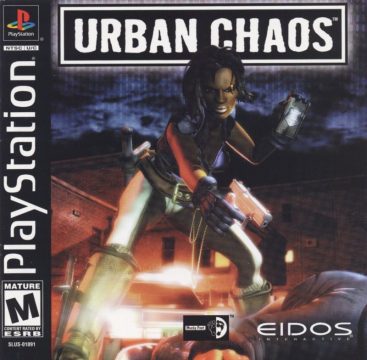 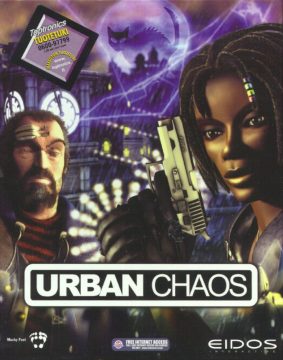 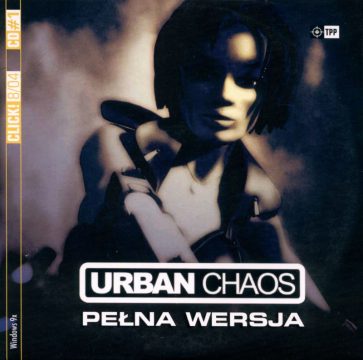 In 1997, a few ex-Bullfrog developers formed their own studio called Mucky Foot Productions, and they managed to make three games before quietly closing in 2003. One of those games was a licensed game for the hit movie Blade II. That’s not great. Their one arguable gem is Startopia, a simulation game about running a space station, but their first release was Urban Chaos, an Eidos published 1999 action game about being a beat cop taking down a gang in a city where the mayor is secretly a Satanic wizard planning to start the apocalypse.

The intro FMV kind of spoils what should be a late game twist with clear magical shenanigans. Despite that, Urban Chaos is an interesting bit of history that shows that awkward period of time where everyone was starting to understand what did and didn’t work in 3D, but there were still hardware hurdles everyone was struggling with. In this case, the hurdle was camera controls. Moving in this game feels fine, with a sort of Croc-like system in place where you press up to go and can swerve like a car as you run. Turning in place takes awhile, but the game is designed around this issue. The problem is that the camera refuses to stick to your back for long. 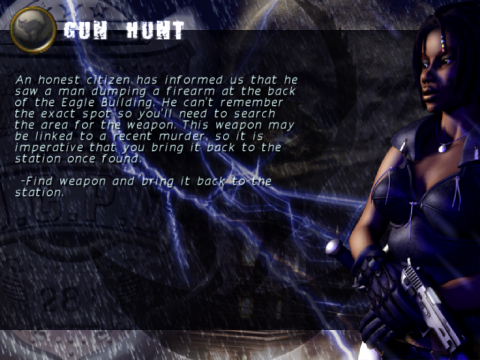 The camera has a cinematic, flowing quality that makes for cool in motion shots, especially when driving. Backing up makes the whole thing swing around and create a dynamic action shot, for example. However, this screws around with your understanding of left and right, or obscures your view of upcoming obstacles or dangers. Combined with your on foot momentum, this is a recipe for running into walls and jumping where you didn’t want to go, not to mention the camera refusing to go through buildings. Unlike, say, God Hand, which would apply transparency on textures and structures obscuring your view of your character, the Urban Chaos camera gets stuck on structures and makes rooftop exploration more of a challenge than it should be by forcing you into awkward angles.

Using cars is also a miserable experience due to that cool reversing camera trick, especially if you’re trying to turn in reverse. The fact cars control like slipping soap doesn’t help. Nothing quite seems to work as you’d expect. It’s worse on the PC version in combat, as your action button used to do a cuffing move doubles as the lock-on target switch button. With as many enemies as you can find yourself fighting in the game as you go along, this becomes an issue. There’s a clear focus on presentation over ease of use that makes Urban Chaos a frustrating play, but it’s that same presentation focus that makes it something special. 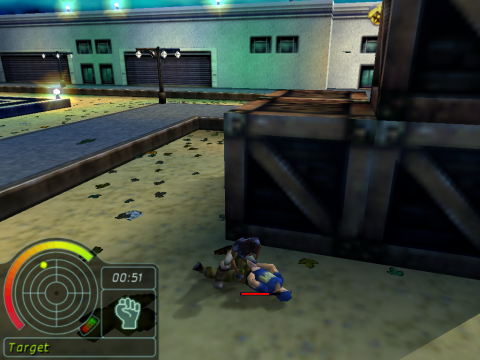 The game is structured into levels, using a small handful of city maps you can explore like an early open world experience, and you’re expected to. You can follow your radar and finish your main objectives, but you’ll miss out on a mess of extra events and much needed stat upgrades hidden in the alleys and on the roofs. Catching criminals is one thing, but it’s also important to arrest public urinators and other such individuals. Despite the script being so silly, there’s a clear focus to add in elements to actually make you feel like a beat cop, and these levels can end up holding a surprising amount of content and secrets you’d never expect to see. Even details like the aforementioned cuffing move adds a form of player expression, where you have the option of doing things easy and gunning criminals down, an action often with the worst outcome, or go the extra mile and take them in alive as an officer is supposed to do.

There are a ton of cool visual design elements as well. The levels look surprisingly detailed for a 1999 city scape, with special buildings and areas you can easily mark in your mind as you navigate. You had a dedicated siren button when in your patrol car. The music kicks in as you dash in an otherwise quiet city. The main menu changes as you move through the story, with seasonal and weather effects to represent passing time and the mood of things in the coming level. A ton of the game is even voice acted, in a hokey but charming way arguably above most voice acting from the era. Urban Chaos still looks good today, and just exploring its world is a delight. 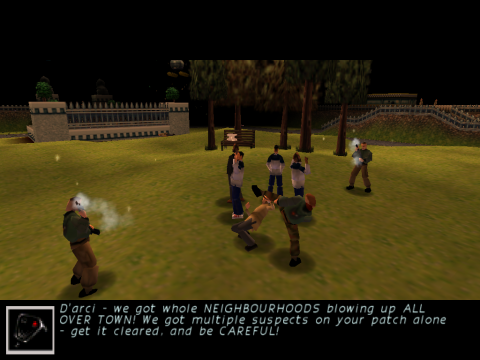 This makes its poor mechanics and the lackluster story all the more disappointing. The game plays things too straight for a build-up to the big reveal, but the core concept is so goofy and should have really been used earlier to work in more levels with demon chaos besides a single late-game one. D’arci at least makes for a fun protagonist, though, a rarity in that she’s a black woman taking lead. She’s a talented, no nonsense person surrounded by incompetents who rushes right into trouble when the stakes are high, a character Eidos would be good to revisit one day. In an industry still struggling with the idea of main characters being girls or being non-white/non-Japanese, D’arci still sticks out for existing at all…which is a bit depressing in retrospect. 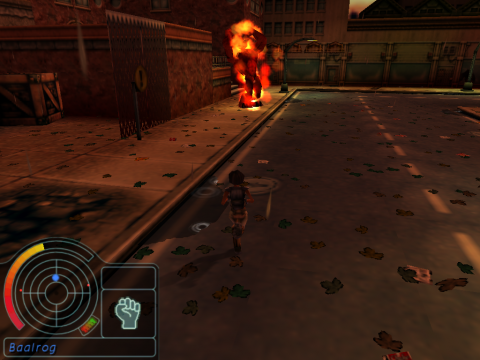 Urban Chaos is a mess, but it’s special in many positive ways. It’s a fascinating thing to explore and dig into, though it’s best done with cheats to skip over the more difficult bits. Challenge isn’t that fun when part of the challenge is basic control. The closing of Mucky Foot should have been the end of things, as they canned their planned sequel. Thing is, Eidos really liked that title, and can you blame them? It’s an eye catching title that could fit into all sorts of scenarios. So, in 2006, they reused that title again for another game unrelated to Mucky Foot’s messy first attempt, and what makes that much better game so notable is the studio behind it would go on to create the Batman Arkham series.

Yup. Rocksteady is somehow connected to the history of Bullfrog. Because video games.