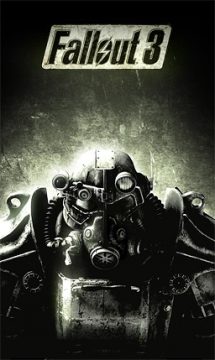 Fallout 3 marks a significant change in the direction of Fallout series. Developed by Bethesda using their Gamebryo engine (the same one that powered Morrowind and Oblivion), it’s not an isometric turn-based RPG anymore. Instead, the game is played from a first person perspective (with an optional third person view that is too inconvenient too actually use) and contains many action elements. This approach was sarcastically described as ‘Oblivion with guns’ and it isn’t far from truth, although Fallout 3 does contain a nod to its turn-based roots: VATS mode in which player uses action points to freeze the action, target specific body parts of the enemy and watch Lone Wanderer fight the enemy from a dramatic angle. 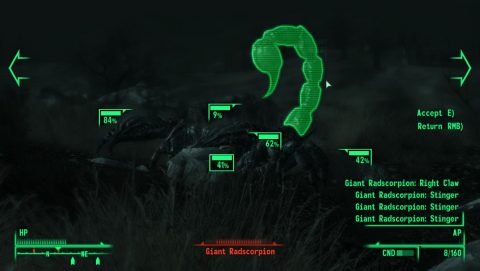 While it would be easy to assume that the only things that the shift to 3D and the addition of FPS elements are the only things that have changed and dismiss any and all criticism as complaints of people stuck in the 1997 who just can’t accept change – and that’s what many enthusiasts did, lamenting ‘gamer entitlement’ or other such nonsense – the truth is that the changes are deeper. From most of the skills getting a very different function to the narrative being given much less focus, Fallout 3 is undeniably not Fallout 1 or 2 in real time.

Fallout 3 is an action RPG focused primarily on exploration, combat and looting. The game’s world is filled with optional locations you won’t discover if you stick to the main quest, on-foot travel from one location to another will be regularly interrupted by encounters with enemies (usually raiders or super mutants) and the player has to constantly keep track of resources – especially if choosing ‘very high’ difficulty level. Player’s inventory is limited by carry weight, healing items are expensive, weapons and armor need to be regularly repaired and ammo for firearms is rare. While first two games were mostly about travelling from place to place and influencing future events, Fallout 3 is about wandering the wasteland, scavenging, trading and most importantly killing. There’s a lot of stuff to kill in the game, violent deaths suffered by those killed by critical hits are given a much bigger focus (complete with tracking shots that follow your bullets and close-ups of enemies exploding into fountains of blood) and combat is often the only possible solution. Fallout 3 takes the joy of exterminating your enemies from the previous games and amplifies it but it also more or less does away with their slower pace and tactical focus, going for something more action-oriented instead. While it lacks the depth of previous games, it can be entertaining in its own way: there is something inherently fun about mowing down Enclave soldiers with your plasma riffle with the help of a friendly super mutant, a group of Brotherhood of Steel knights and a huge anti-communist robot that throws small nukes.

While Fallout 3 uses SPECIAL system not unlike that of the previous games, many of the skills have been redesigned to better fit into the explore-fight-loot cycle. While weapon skills and speech work more or less the same way they did before, the abilities previously used primarily for quest-specific skill checks have been given a different purpose. Lockpicking and science now give you the ability to enter lockpicking and hacking minigames, with the higher skill levels allowing to attempt more difficult challenges. Repair is now used to fix your weapons and armor. Having low intelligence does not change your dialog options in a significant way. The skill checks still exist but they’re few and far between as the game goes for a different kind of non-linearity: a big open world is now more important than multiple solutions to each quest.

The story of Fallout 3 is centered around Lone Wanderer who escaped from Vault 13 and its tyrannical Overseer to search for his disappeared father – a scientist who used to work on mysterious Project Purity. The story includes many elements and themes known to anyone who played the earlier games: water purification, GECK, super mutants, Enclave, an idealistic Brotherhood of Steel chapter, saving your home and being unable to return to it, a ruler who turns out to be an artificial intelligence, unethical experiments done on the vault dwellers etc. Unfortunately, it does so without much thought as it often contradicts previously established lore. The game’s ending is also quite stupid, with a completely pointless sacrifice which could be easily avoided with a bit of logical thinking but the game will chew you out for even trying. Also, any possible emotional impact of the ending is ruined by the fact that Broken Steel expansion retcons it completely.

That said, the main storyline isn’t really bad. The actual problem with the narrative of Fallout 3 is that it completely fails to do what the first two games excelled at: it can’t create interesting, believable post-apocalyptic societies. While the fact that the world is in the worse state than it was about 30 years earlier (in Fallout 2) can be handwaved by a difference in geographical location (older games took place on the West Coast while Fallout 3 is set on the opposite side of the former United States), there’s really no reasonable explanation for how little sense some of the locations make. Fallout 3 has a town built around a dud nuclear bomb (which your character can disarm or set off), a mine inhabited by children and a settlement terrorized by a gang of cannibalistic mutants who pretend to be vampires. Some locations make more sense but when they do, they become generic scavenger towns. It’s not all bad – sidequest about ghouls who want to live inside tower inhabited by wealthy humans is more morally ambiguous than most quests from earlier games and everything about Tranquility Lane (a virtual reality with a dark secret, inspired by Twilight Zone episode “It’s a Good Life”) is amazingly creepy – but the good stories are few and far between. Worst of all, your choices regarding the places you visit are not reflected in an ending which depends only on your karma and choices made during the main questline.

Fallout 3 has five major expansion packs. Operation Anchorage and Mothership Zeta are long, boring and prove that the game’s shooting mechanics are not good enough to sustain such combat-heavy campaigns with little exploration. They’re worth playing only for great loot (Power Armor from Anchorage can carry your character through the whole game) and, in case of Operation Anchorage, some background on pre-war Fallout universe. Broken Steel which happens after the main game is also mostly skippable. Point Lookout and The Pitt are more exploration-focused and therefore much more playable if you want an experience similar to vanilla Fallout 3.

The biggest strength of the Fallout 3 narrative is environmental storytelling. While the state of the world might not make much sense given that it happens about 200 years after the apocalypse, Bethesda was able to create a truly great wasteland. The ruined bridges and highways, the bleak and desolate plains and the perpetual war that is happening on the ruins of Washington DC come together to create a grim and unwelcoming world (which fits nicely within the gameplay in which resource scarcity is such an important factor).

Fallout 3 might be more serious than any of the previous games but it’s not completely deviod of humor. The game’s biggest sources of comic relief are DJs of two biggest radio stations of the Capital Wasteland: Preisdent Eden who leads the Enclave and spreads propaganda through the airwaves and Three Dog, an easy-going jazz enthusiast who makes fun of the game’s events, comments on the protagonist’s actions and gives helpful advice (without breaking the fourth wall). There’s also a lengthy questline about in which the player helps a certain character write a wasteland survival guide, which more often than not results in broken legs, radiation sickness and exploding mole rats. 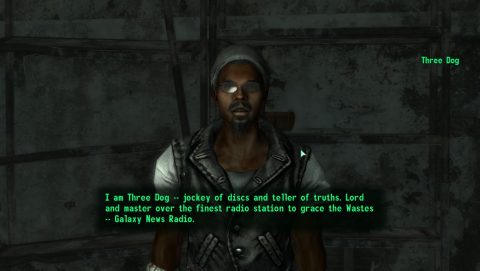 Visually, Fallout 3 is a mixed bag. The art direction is generally good and the environments look great but the characters – especially humans – often fall into uncanny valley. This is especially true about facial animations as they’re not convincing at all and often don’t match what the characters are saying. The game also has its fair share of graphical glitches but they’re fairly minor compared to some other technical issues.

Inon Zur’s soundtrack is unimpressive but the game redeems itself by taking a hint from Grand Theft Auto and allowing the player to listen to radio. The biggest stations are Galaxy News Radio in which the aforementioned Three Dog plays jazz, blues and some 1950s pop and Enclave Radio devoted to American patriotic music. It is also possible to unlock a third station which plays classical music. While listening to any of those while fighting super mutants is cool the first few times (and usually pretty), the selection of both music and spoken word segments is rather limited given the game’s size. Voice acting in Fallout 3 is mostly good (with a few well known actors making an appearance – e.g. the protagonist’s father is played by Liam Neeson) but there’s only so much you can do given the quality of writing (after all, Fallout 3 is a game where passing an intelligence stat check results in your character repeating what the other party just said).

On a technical side, the game’s quite buggy, with things like getting stuck in terrain being quite common (noclip command – entering console and writing ‘tcl’ – might be cheating in most games but in all Gamebryo-based Fallout titles it’s a necessity). The game also doesn’t run well on modern operating systems but many of the issues can be resolved with either fan-made bugfixes or some .ini file editing.

Is Fallout 3 a bad game? Not really. It’s fun while it lasts but it lacks both the gameplay depth and interesting narrative that would make it as memorable as the previous mainline titles. It’s not a great RPG, and it’s not a great Fallout either, but it’s a decent post-apocalyptic shooter with RPG elements (not as good as STALKER though). It’s a game designed not for intensive but for extensive play – it’s possible to spend hundreds of hour wandering the wasteland, fighting the enemies and doing random quests but spending too much time at once will just leave the players tired of the repetition. While its success is easy to understand, it’s difficult to appreciate Fallout 3 after playing Fallout 1 and 2.