Fallout community is known for creating large amounts of high quality fan works. Their creations include many game modifications – especially for Fallout 3 and New Vegas because of readily available ‘Garden Of Eden Creation Kit’ editor – but they often go beyond that, producing standalone games and short live action films.

The central hub of the modding community for the first two Fallout titles was the No Mutants Allowed website, although nowadays it’s mostly known for their intense dislike for Bethesda’s games. The most important mods for Fallout has to be Fallout Fixt which combines multiple other mods to make it possible to play the game in high resolution (Fallout 1 High Resolution Patch, make it possible to give orders to AI companions like in the second game (Fallout NPC Mod) and restore some cut content, most notably Master’s armies invading the settlements in-game, not just in the endings (Fallout Restoration Mod). Fallout 2 has a similar restoration mod (Fallout 2 Restoration Project made by Kilap, also known for creating unofficial bugfixes) but it’s much more extensive, featuring whole new locations (like an amazingly weird EPA facility), characters, items and quest. While it does introduce even more bugs to an already buggy game, a lot of the content there is must-see for Fallout fans. 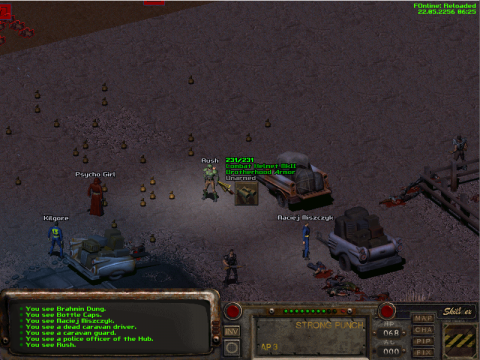 Fallout 3 has less single big mods and more smaller incremental changes that transform the game significantly but only after you install many of them. Those include anything from better graphics and new weapons to new voiced companions or improved locations. Of the bigger mods, the most important has to be Fallout 3 Wanderer’s Edition which makes the game significantly more difficult while improving both shooter and RPG mechanics. The mod also removes the base game’s small follower limit. Wanderer’s Edition might be the best way to play Fallout 3, turning it into something between New Vegas and 90s RPG/FPS hybrids like Deus Ex or System Shock 2. New Vegas mods are similar, with notable ones including New Vegas Bounties series which adds multiple interconnected sidequests that play out along the main plot and Project Nevada which turns the game into something similar to a tactical shooter, with far better shooting, night vision, thermal vision and helmets which limit your range of vision.

Fallout fans don’t just modify the games, they occasionally make ones from the ground up as well. The best example of that is the FOnline engine created by Russian group called Rotators to power their unofficial Fallout Online MMO. Nowadays, the biggest games based on the engine are FOnline 2 which based on Fallout 2 but adds several new mechanics like crafting and FOnline: Reloaded which is set between the events of the first two game and has a huge world map which includes locations from both Black Isle’s Fallouts. As the engine’s SDK is freely available, anyone can use it to create their own single player or multiplayer games with Fallout-like mechanics.

Of Fallout fan films, the most famous ones belong to the Fallout: Nuka Break series. Nuka Break begun its life as a silly short film about the adventures of a Nuka Cola-addicted Vault Dweller, a ghoulish thief and an escaped slave. It’s a decent parody of the games and it includes many instantly recognizable elements: bottle caps, Nuka Cola, Enclave eyebots, Caesar’s Legion etc. but it really shines in the follow-up web series (with a cameo by Chris Avellone himself) and another short film called Red Star. Nuka Break has great (for an amateur production, a few of the special effects are a bit too obvious) production values and despite not being an official production, it might be the best adaptation of a video game to the medium of film. Nuka Break does a great job at replicating a low-level Fallout adventure as its protagonists travel through the desert, stay in post-apocalyptic villages and participate in a climactic battle for a small plot of fertile land.

Another notable fan film was Fallout: Lanius which retells the grim, violent backstory of Caesar’s Legion’s legate. While Lanius features some really good costumes, its action sequences (and there are a lot of those) clearly show its budget limitations. While it’s not really a bad short film, it’s definitely not as good as the aforementioned Nuka Break series.

While Fallout is for the most part a video game franchise, some official non-game tie-in media have been produced. Tabletop roots of the early games led to the development of Fallout: Warfare, a relatively simple (when compared to the computer game) wargame based on Fallout Tactics. Another game, this time directly inspired by the setting and rules of the first two games, was being developed by Glutton Creeper Games when Bethesda acquired the rights to the series. This game, titled Fallout Pen and Paper d20 was supposed to be a Fallout tabletop based on Open Gaming License and d20 system. When Bethesda cancelled the project, it was hastily remade into Exodus but the changes are very minor and it’s still more or less Fallout with a few names changed. Exodus was designed by Jason Mical and based on his unofficial work on Fallout PnP. 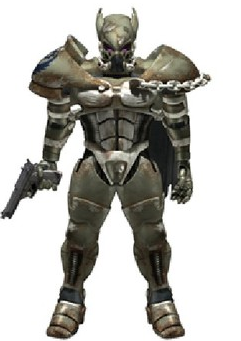 Fallout 2 supplementary materials included two short stories which added to the series’ lore. First of those was Vault Dweller’s Memoirs included in the game’s manual which provides the summary of the first game’s plot as well as the closest there is to the official version of the game’s events. Another one is Book of the Elders which was a part of the official strategy guide and it describes the backstory of the Arroyo village from the perspectives of its leaders. Both are fairly short and decently written so for those interested in the world of Fallout they’re worth a read. Fans of the older games should also check out far longer Fallout Bible. This book consists of design documents collected over the years by Chris Avellone and it’s a great source of background information about the series. After Bethesda took over the series, Bible isn’t considered canon so its contents may contradict the storyline of the newer games.

There were two attempts to adapt Fallout to a comic book medium. First of those was One Man, and a Crate of Puppets – an official webcomic released as a part of Fallout 3 promotional campaign. As it was made by the creators of Penny Arcade, it features similar art style and sense of humor. It’s nothing really special but it’s not bad either, with a few genuinely funny strips. The other comic was a far more serious All Roads written by Chris Avellone and released by Dark Horse Comics. All Roads is an immediate prequel to New Vegas and it centers around the people who shot Courier in the game’s opening. While visually it doesn’t stand out from most of the other comic books, it is very well written and despite not adding much to the Fallout lore (aside from a bit more information about the infamous Bitter Springs Massacre and some confusion about whether horses exist in post-apocalyptic America), it adds to the characterization of a few characters. While it’s not great, it might be the best official Fallout tie-in.