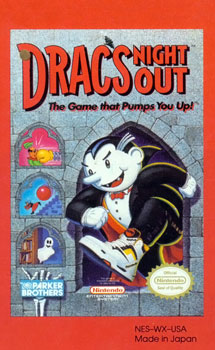 Ah, Dracula. As a public domain figure, he’s been in an uncountable number of games. We’ve had him whipped more times than a dozen BDSM conventions, stabbed him, shot him, maybe just straight up punched in the face once or twice. Much more rare, however, is the opportunity to play as the man in black himself. One of the rare exceptions is a particular unreleased NES game called Drac’s Night Out, which puts you into the shoes (specifically, the Reebok Pumps) of Dracula himself. Despite its status, however, Drac is one of those handful of games that’s perfectly playable from start to finish, even if digging through the internet is most likely the only way you can get your hands on it. Even by NES standards, it’s a pretty simplistic game for 1991, which might have led to its cancellation. It is, however, a decently fun game that’s worth checking out for the premise alone. 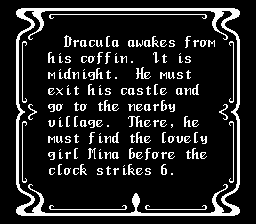 The other fascinating thing about this game is that it contains probably the strangest advertising tie-in since the deluge of Snickers advertisements in Biker Mice from Mars. The Rebook Pump shoes are featured prominently in this game as power-ups, which, truthfully, raises a lot of questions. Exactly how this came about, we’ll never know, although the executive meeting would probably have been amazing to listen in on.

As Dracula, your quest is to find the lovely Mina, who in this incarnation apparently just naturally digs vampires. Not only do you have to make it through Dracula’s castle itself, but also search the town to find the house Mina is waiting in. You only have six in-game hours to accomplish this task before sunrise. The game itself is divided into five rounds, each of them split into two types of scenes. The castle scenes take on a side-scrolling view, where Dracula has to go from his coffin to the bottom floor of the castle. The town scenes, however, put you on a top-down view of an open map, looking for the house containing your quarry Mina.

In the castle scenes, Dracula has to walk down the hundred or so staircases to get from the very top floor, where his coffin rests, to the exit waiting on the bottom floor. Unfortunately, the castle is crawling with villagers who can put up a surprisingly good fight against Dracula. Even worse, this particular incarnation is lacking in super-strength, flight, or near invulnerability. He can, however, temporarily hypnotize villagers into freezing in place by hitting the A button near them, which allows you to make a quick escape. Using this takes up some of your health, or “blood”, as the game refers to it, so it’s best to save it for emergencies. 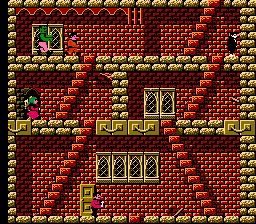 To actually kill the pesky villagers, you’ll need to make use of the various traps laying around Dracula’s castle. Most of these are activated by switches and buttons you can use with the A button, which cause a variety of different things to happen. Some open or close barriers, some send monsters like ghosts, skeletons, and spiders crawling forth, while others might fling swords out of the wall, or drop chandeliers on the floor. If a villager gets hit by a trap, they’ll be stunned, which will give Dracula the chance to move up onto them and drain their blood, getting a little health back. Killing off five villagers in this way turns Dracula into an invincible bat, letting him get through several floors quickly. You’ll also frequently come across the new, stylish, very much not shoehorned Reeboks Pumps, which make Dracula run much faster, as well as making his jump far less useless than it is most of the time. 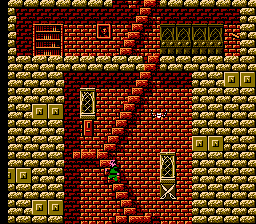 While his castle layout might stop meddlesome vampire hunters, the architecture can cause just as many problems for Dracula himself. For one thing, even a very short fall will hurt Dracula and drain his blood, and there’s a lot of gaps in the floors that you won’t always notice at first glance. Even some of Dracula’s own traps, like boulders, can end up hitting him, costing him more health and sending him upwards. Most annoyingly, most of the castle is made up of staircases, as well, which leave you defenseless when you’re moving across them. This is especially annoying since the game’s camera doesn’t always scroll down quickly enough, meaning you can stumble into an enemy sooner than you can react. Generally, rushing through anything instead of letting villagers walk right into your traps is going to get you killed. 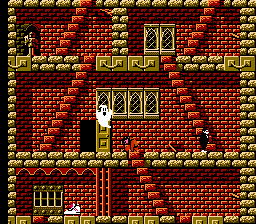 Should you actually manage to escape from your castle, you’ll end up in town, where Mina waits for you in one of the many, many houses. Unfortunately, you’re not told where she actually is, nor do you have a map that you can readily access. To actually find Mina, you’ll have to search out for random villagers in town and drain them, which will make them drop things like keys, magic lamps, and four-leaf clovers that you’ll need to progress. You’ll also have to avoid the wandering mobs of villagers, who can’t be drained. The enemies here are far more dangerous than the castle, since they can’t be drained, will track you down for as long as you’re near them, and will usually corner you right into another mob where you can’t escape. 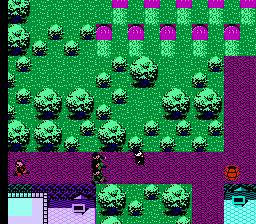 Once you have some keys, you’ll need to start searching houses. Some houses have old men inside them, and since this is an NES game, they’ll offer you vague advice in your search for Mina, like telling you what direction she’s in, what landmarks are near her house and where they are on the city map, and where certain features, like bridges and tunnels, can be located. Since old men are the only way to see the city map, they can be useful, although you’ll need to find several before you can get a clear location on where Mina is. You may also find sleeping ladies, who will lead you a little closer towards Mina’s house after you drain them. You might even find Reebok Pumps, which, while it should raise several questions about the game’s time period, are once again useful for racing through town at lightning speeds. 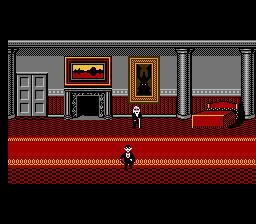 The city map is pretty huge, overall, but there’s a few ways to make navigating it slightly easier. Magic lamps can be taken from villagers, and will let you use the trapdoors you find in certain houses to warp through the map. Four-leaf clovers let Dracula open up locked gates, as well. Overall, the process eventually boils down to trial and error. Drain a bunch of villagers to keep your blood supplies high, get their keys, find enough old men to figure out what direction to move towards, and repeat until you find Mina. The mobs, since they spawn randomly and often right in front of you, are going to be your biggest problem, more than the map itself. Again, the issue is that the camera never scrolls quite as far as it should, meaning you have to push right up to the edge, and thus, into something that might kill you, to see further ahead. 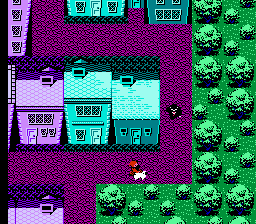 Once you find Mina, a new round begins, with the only major difference being a new castle to make your way through. The basic concept doesn’t change much at all, nor are there much in the way of new elements or features. It’s a difficult game, sure, but that’s more due to the often questionable enemy placement, than anything. It does get rather unfair, at times, but the game is at least nice enough to let you continue at the start of your current scene until the timer hits 6 AM. Even then, it’s a fairly generous time limit for each round, too, clocking up to about one real-time hour before Game Over.

The graphics are somewhat chunky, with rather small sprites being used for everything. There’s also much visual variety to be seen, with every castle looking about identical, aside from the bricks in the background being slightly different colors. While it hardly looks awful, it pales pretty hard considering the game was set for a 1991 release date. The sound, as well, isn’t particularly great, either. The main tracks are somewhat catchy, but they sound pretty off tune, and the sound effects tend to be on the loud, annoying side.

Overall, Drac’s Night Out is an interesting game, and one that’s definitely worth trying out for the premise of getting to be Dracula. And it’s not that there isn’t some fun to be had, once you figure out how to actually get around without getting yourself killed. It is, however, a pretty frustrating game, and one that definitely wouldn’t have impressed many people on the same year the Super Nintendo hit Western shores. Whether that’s the official reason it was cancelled or not, it’s still a shame that the game never saw release. However, despite its unreleased status, it’s perfectly playable all the way through, which means it might be worth going for one of the reproductions floating around online.

And let’s be fair, it’s a far better game that lets you be Dracula than Castlevania: Judgement.