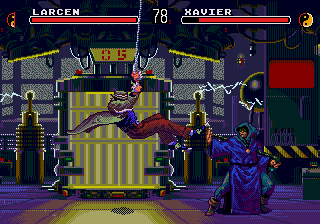 Eternal Champions: Challenge From The Dark Side - Sega CD (1995)

Released at the tail end of the unpopular add-on’s life, EC:CDS (I see what you did there, Sega!) was more or less a swan song for the console. Not a great swan song, but probably one of the better games you could end up getting for it next to Sonic CD, Snatcher, Lunar, Popful Mail, Keio Flying Squadron, and a few others. Then again, considering most of its library, that’s not really saying much.

The first thing you’ll notice is a rather grainy FMV of a shark chomping on a man and a woman, who looks suspiciously like Cammy in a lifeboat. This was the logo FMV for something called Deep Water. Apparently this is the brand Sega would have used for their more violent games, although only Eternal Champions, its spinoffs, and the Saturn version of Duke Nuken 3D would use it. 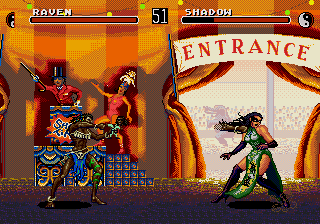 The next FMV after that is the intro, rendered in the same way as most Sega CD FMV (i.e., very grainy). It explains the basic plot of the game, as well as giving short introductions on each of the characters, including the new ones. Apart from the mid-1990s CGI, the Eternal Champion character’s French accent is atually pretty decent. Basically, the story is that the Eternal Champion’s evil counterpart, the Dark Champion, withheld some extraordinary people from his contest, so now they apparently have to do a Mulligan on it. To be fair, the first game’s plot wasn’t really something that left a lot of room for a sequel.

Challenge of the Dark Side treats itself like a sequel, although it’s more of an upgrade to the original game. It uses the same engine and mechanics, although tweaked a little, and all the characters and stages from the original game return, although they’ve been upgraded with new moves. Every character also has a set of Skill Moves, which are special moves that usually don’t cost any inner strength to perform. Special moves also generally cost less inner strength to perform, which means that you can actually now, you know, use them.

A female pirate who uses Kajukenbo. She ended up getting killed by a rival pirate while trying to steal his treasure. She has one of the coolest stages out of the new four, which is a pirate ship that slowly gets torn apart by cannon fire over the course of the fight.

A Voodoo healer who uses Tae Kwan Do. (Seriously, where did these people learn these fighting styles?) She has control of a mystic hourglass, which was used against her to steal her life. She can use this to chuck it at opponents, slow them down, and… add or subtract time from the timer… Apparently voodoo gives you powers to see beyond the fourth wall.

A cowboy/sheriff that uses his own self-made fighting style. He ended up being hung by some criminals he was trying to bring to justice. He uses a lot of dirty fighting moves, like spitting tobacco at his opponents, as well as… hitting people with his ponytail?

An Egytpian pharaoh who uses Hung-Gar Kung-Fu, including a pair of… nunchaku, for some reason? He was pushed into the Nile River by an assassin, where he drowned. Probably one of the cheapest AI opponents to fight against, since he has the habit of using his downward fire dive move every single time you jump, which causes him to make a hilarious noise.

Aside from the new four, there are also several secret characters. This was far from the first game to have hidden opponents, but it was probably the first to actually have characters that were permanently saved to your file upon reaching certain conditions. Of course, you can always use cheats to unlock them, too.

The Eternal Champion’s evil counterpart, and the second of the game’s bosses. He’s just as cheap and just as many-formed as the Eternal, although while the Eternal bases his forms on elements in nature, Dark focuses more on natural disasters.

This guy just rules. Very blatantly based on anti-video game politicians like Joe Lieberman, Senator has “dishonesty” as a fighting style. He ended up dying of a heart attack due to a landslide loss in an election. Senator, as you’l expect, has a ton of cheap, political-themed moves, such as a ban on violence that makes the opponent completely unable to attack. He also has the best theme and stage, bar none.

A Green Beret who uses a pair of brass knuckles to fight. He was killed by a Vietnamese double agent. He uses knives and explosives in combat, while not being as much of a total dork as Stryker.

A Chinese acupuncturist who uses Monkey Style. Got executed for a crime he didn’t commit. He also carries around a giant hoop to fight, for some reason. He can use the power of the elements to inflict damage and buff himself up, including turning himself into pure metal, Mario 64-style.

The frickin’ Greek god of death. Got “killed” by a mystic force that transformed him into a mortal, where he was burned at the stake. Uses a big scythe, as you’ll expect from Death.

A bunch of random animals who all ended up having their lives stolen from them before their time. All these characters are weird and not much fun to play as, due to their short size and lack of attacks. 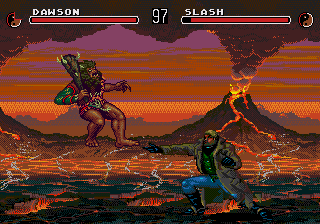 Challenge From The Dark Side is quite an improvement over the original, although it’s still nothing you’l trade your average Capcom or SNK game over. The game speed has been cranked a little bit, and it’s easier to do combos on your opponent now. There’s more of a focus on combos in general, including a mechanic called Power Combos, where pulling off certain chains will give you unlimited inner strength for a few seconds. Most special moves still use either multiple-buttons-at-the-same-time or charge motions, although there’s a few quarter circle moves added in as well. More would have been nice, though.

The new characters don’t really fit any sort of traditional fighting game role, much like the other characters, and the animals are just too plain weird to use against anybody else at all. If you didn’t like how unorthodox the special moves in the original game could get, this definitely won’t change your mind.

Training Mode and Battle Room are sadly missing entirely, although the single player’s been tweaked. There are now three difficulty levels to choose from, and the AI isn’t QUITE as brutal as the original game. It’s still pretty rough, but any improvement helps. The game now uses a standard continue screen if you lose a match, although you only get four credits per game.

However, the Eternal Champion is still just as unfair for all the same reasons, and he WILL Game Over you if you lose, no matter how many credits you have. And if you beat him, you get to fight the NEW boss, the Dark Champion. Thanks, Sega. At least you get a unique FMV of a character’s death if they run out of credits or lose to one of the champions, which is kind of cool.

In fact there are a lot more ways to finish off an opponent now. The Overkills return, and are now SLIGHTLY easier to pull off. Every stage also has a second stage fatality, called a Sudden Death, performed by knocking an opponent into a different part of the arena. There’s also a new finishing move called a Vendetta, which is basically a Mortal Kombat-style fatality where your character dispatches an opponent in their own special way. 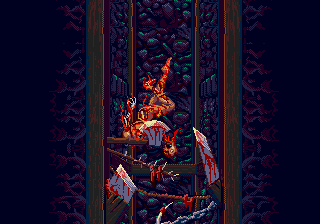 While the Overkills in the original game were fairly subdued, in this game they crank the blood to absolutely ridiculous levels. Very, VERY few fighting games have ever come close to the insane amounts of blood that pour out in buckets from nearly every finishing move in the game. They’re also much more over the top, like an Overkill where your opponent is launched into the sky, then ends up impaled on the Washington Monument. Or where a car full of clowns is launched out of a cannon to land on top of them, turning them into a red splatter. All the original Overkills from the first game return, although they’ve all been redone to be much bloodier.

Possibly the most creative kind of finishing move over ANY fighting game, however, is the Cinekill. These are especially hard to pull off, requiring a Power Combo that leaves the opponent with less than a third of their life and for them to be dizzied on a winning round. Pull this off, and the Dark Champion will initiate an FMV fatality, unique for each character it’s performed on. Sadly, with the Sega CD’s reputation for FMV, you won’t be able to tell what he’s actually doing most of the time, but the idea is cool.

The game looks mostly similar to the original game, although with a few more colors added thanks to the Sega CD’s better hardware. The new characters, including Shadow’s new outfit, are drawn differently than the originals, which does make them clash with the original nine a little more than they should. That’s not to say they look bad, it’s just very obvious they were added much later on. Characters still don’t say much aside from taunts and grunts when they’re dizzied, although they’ve been re-recorded to sound clearer. 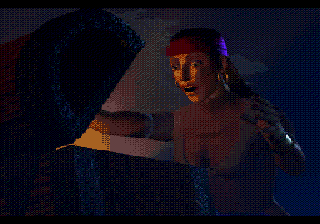 The stages for the original nine are mostly similar, barring the new stage fatality and redone original Overkills they got. A couple of characters got new backgrounds to fit their backstories more, and their original stages were given to the secret characters. One of the secret stages is Washington DC, 1995, where you fight in front of a McDonald’s while the “50 Billion Sold” sign slowly increases. For all of its faults, you have to love a fighting game where you can say, “The senator telekinetically lifted the pirate and turned her upside down, shaking her pockets for her money. This caused her to fall on a manhole, which lifted her into the air and onto the Washington Monument, impaling her.”

The music, however, is probably the highlight. The game uses Redbook audio, allowing a whole lot of electric guitars, which practically every song loves to use. Even Ramses’ theme constantly switches back and forth between your standard Egyptian-sounding music and somebody shredding on a guitar. The best track is also the Senator’s, which is, honest to god, a heavy metal version of Hail to the Chief.

Overall, Challenge from the Dark Side IS an improvement over the original Genesis game. The problem is that it’s just not THAT big of an improvement. Still, the Sega CD was limited for fighting games. The sheer cheese is worth it alone. Sadly, unlike the Genesis original, this game never got a port, and compared to Sonic CD, nobody will probably care if it ever does or not.

After this game, there would be no more games in the Eternal Champions series – not counting the spin-offs. Apparently there were plans for a Saturn game that would bring the series to the third dimension, and would include “Infernals”, evil individuals who fight for the forces of chaos. Apparently one of these would have been Rasputin, and probably not the World Heroes version, either. However, Sega of Japan wanted Virtua Fighter as their flagship fighter, and the game ended up canned. No gameplay footage or screenshots exist.