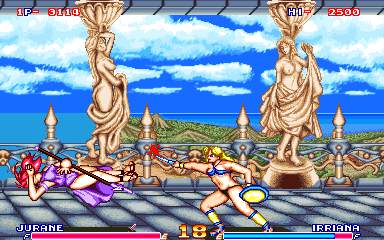 In 1984, a Taito subsidiary called Allumer developed a game called Great Swordsman, one of the first one-on-one fighting games ever made. Compared to its contemporaries like Karate Champ and Urban Champion, it focused on weapon-based combat rather than hand-to-hand karate. It had three different settings – a modern day sparring tournament, a Japanese kendo tournament, and a Roman-style gladiatorial arena. 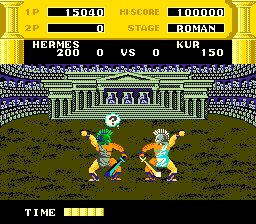 Apparently Allumer liked the gladiator levels so much that they refined them and turned them into its own game. Dubbed Gladiator (and known as Great Gurianos in European territories), it featured larger characters but kept the same basic fighting mechanics. Neither games had life meters, but Gladiator introduced armor to protect your fighters from blows. Hit an area once and the piece of armor would fly off. Hit the same area again, and the fighter would lose. 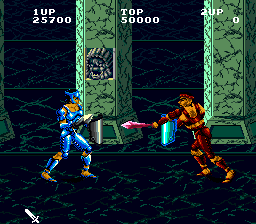 Five years after Gladiator, Capcom took the gaming world by storm with Street Fighter II. After seeing the incredible success and realizing that, technically, they were there first, Allumer dug up their little known IP out of the closet to try to mimic its success. It hasn’t aged well, at all, but it introduced some important mechanics – namely, it was one of the first weapons-based fighters, predating SNK’s Samurai Shodown by about a year. There are many original ideas to be found in Blandia, and many problems, as well.

Like Gladiator, Blandia uses three buttons for attacking – high, low, and straight. Like other fighters at the time, Blandia introduces life meters so there are no longer single hit kills. But the armor system makes a return too, meaning that you have to break high, low, or middle armor to do any damage. This only affects some characters, though. The fighters without armors generally have some kind of glaring advantage over the armored fighters, an attempt to balance the game a bit, although ultimately it doesn’t work.

Blandia also has variable attacks based on the distance from your opponent. If your character is close, you will do a different attack than if you would have used the same move far away. A great example of this is Diokles’ shield. Normally, it would only be used for blocking, but if up close, he uses it as a weapon. Likewise, where Jurane would normally use her spear, in close combat she puts up a force field or pulls out a knife. Close and far attacks are completely different and do completely different amounts of damage. This puts emphasis on zoning. It is very important to keep your opponent where you want them to be, as it can be key to winning.

The storyline involves the world being taken over by Gildus, the “Mad Gold King”. The six playable characters all have their own personal reasons to defeat Gildus, of course. After choosing a character, you fight the five other playable characters and then enter the gold castle for a boss rush. There are ten characters in total.

Gurianos was the main character in Gladiator. Unlike in Gladiator, where Gurianos has more than 10 different armor pieces to individually knock off, he now only has high, middle and low. This consists of a helmet, cuirass and greaves. His new moves similarly reflect this. He has a fireball that is almost the same thing as the famous “hadoken”. He has a charge attack similar to Bison’s Psycho Crusher. Lastly, Gurianos has a completely new move that was not ripped from Street Fighter II where he puts forth all of his strength into one mighty slash. Even the button mapping for this attack is unique, as it require a half circle forward motion followed by pressing all three attack buttons at once.

“The Nihilistic Fighter”. Diokles is a minor villain in Blandia, and the only playable bad guy. According to the arcade flyer, Diokles has “quick offense and strong hitting powar”. Misspelling the word “power” is a recurring theme here. The flyer also states that he uses a “double edge axe”, but we all know that this is a lie. He has the exact same moves as Gurianos, much like how Ryu and Ken had the same moves early on. Unlike Ryu and Ken, Diokles is not a complete pallet swap. His helmet has a goofy-looking crest on top and there are some minor animation differences. He also has one different win pose, but the other is the exact same as Gurianos.

Irriana is one of those typical fast characters that don’t do as much damage as everyone else. She also jumps the fastest and highest. To mix things up, she was given a powerful magic attack that can be very destructive. Unfortunately, like many of the best special moves in this game, it takes far too long to execute to be practical. You might have read that Irriana is the same character as Irene from Gladiator, but this is not true. They look completely different and use completely different fighting styles.

Retsu.Zen is an undead samurai that wields two swords. Despite his sword’s length, Retsu.Zen easily has the worst range out of all of the characters. He can transform into a ghost as one of his special moves, but it is way too hard to do for how much damage it does. Retsu.Zen’s attacks are very fast and require skill to use due to his short range and short attack times. He can also spit blood and acid, which are two of the more amusing attacks in this game.

One look at him tells you that McGill is paying homage to Arnold Swartzenhager in the sword and sorcery classic Conan the Barbarian – his ending absolutely confirms it. Supposedly, McGill wants to destroy The Mad Gold King in order to prove that he is the strongest fighter in the world. McGill does not wear armor and is incredibly slow. This was partially justified by his attacks being very powerful, but his weaknesses still outweigh his strength.

Jurane is a spear-wielding elf or “demi-human” as she puts it. She has many magic attacks, including the ability to make pillars of fire, toss grenade like bolts, and shoot a fairy that messes with your controls. Unfortunately, most of them are far too hard to execute to be very useful. Her spear also has incredible range, speed, and priority. Jurane wears no armor, meaning that it is easy to damage her, but that does not stop her from being very imbalanced. Jurane is much harder to defeat than any of the bosses in this game. It probably helps that the computer cheats when using her.

The first boss in The Gold Castle. Launa is a very strange, short creature that has glowing knives for hands. Its small hit box and speed make Launa one of the more annoying bosses. Unfortunately, Launa cannot block and takes extra damage, making the boss fight far easier than it should be. Still, you do not see fast, weak bosses in fighting games every day. Launa is an interesting original idea that could have used some tuning.

Xeldus is the second boss and the weakest character in the game. His story is not clear, but judging from his win and lose quotes he was brainwashed into being a guard for Gildus. Xeldus has a fearsome array of attacks and is capable of doing immense damage. His problem is that his attacks have no priority. You can literally pierce right through his best moves and counter them without taking a scratch.

Imageo is the third boss. She is supposedly the most powerful magician in the world and serves Gildus in his throne room. Imageo would be a very challenging boss fight if it were not for her very large hit box that is much larger than her sprite. This is such a problem that you can slash her from across the screen while she’s trying to cast a spell. Her spells are very powerful, though. Besides the moves obviously ripped from Jurane, she can rapidly shoot projectiles both high and low. This sounds annoying, like Sagat’s tiger cutters, but you can almost always hit her harder due to her gigantic hit box. Once again, a glaring flaw makes a boss far easier than it should be.

The last boss. Gildus is The Mad Gold King. He is extremely fast, does tons of damage, sports tough armor, and has no real weakness. Unfortunately, Gildus also has a knack for misspellings, warning you with “Don’t underestimatc my powor”. As for some of his notable moves, Gildus can charge with his shield and counter your moves with a throw, much like what Geese Howard does in many of SNK’s fighters. Even though Gildus is one of the more difficult fights, it can be hard to take him seriously because of his cheesy lines.

While it can be fun to play with a friend, the AI in Blandia ranges from buggy to to flat-out unfair. Sometimes enemies will go into a loop and start using the same move over and over again and be unable to stop until hit. This is especially apparent with Imageo. Also, recall how Guile, Blanka or E. Honda when controlled by the computer, would never have to charge his attacks in Street Fighter II? Blandia is even worse about this. Many of Jurane’s attacks take at least four seconds to charge, and attacking is not allowed during that time. The computer can somehow spam the “pillar of fire” attack, even though such a cheap strategy is impossible for human players.

The buggy AI is the least of its problems. The hit boxes are eccentric at best, and the special moves are often harder to execute than they should be. Furthermore, while the gigantic sprites and colorful backgrounds were impressive back in 1992, the extraordinary glut of fighting games during the decade have rendered it almost entirely obsolete, with little of note beyond the mechanics it borrowed from Gladiator. If you can get beyond the flaws, Blandia can actually be very fun to play, but let’s just say that the title is not entirely inappropriate and leave it at that. 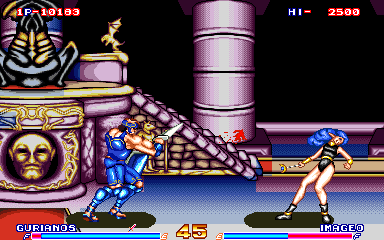 Yes, you can hit her from that far away.

Blandia was never ported to any the major consoles, and only ended up on the FM Towns Marty, PC 98 and Windows. The FM Towns version looks pretty decent at first glance, but unfortunately, sacrifices had to be made in order for the game to fit. The arena backgrounds do not look as good as the arcade version and the action can get choppy sometimes. The NEC PC 98 and Windows 98 versions are called Blandia 98, and while they suffers from some slight graphical downgrades, it also has some improvements. The speed has been increased so the game feels a bit better, each character has their own theme music, and the ending cinemas have been redrawn to look much, much nicer.

Thanks to Trickless and this site for the info on Blandia 98. 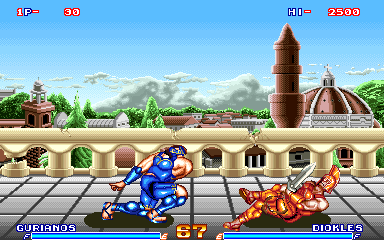 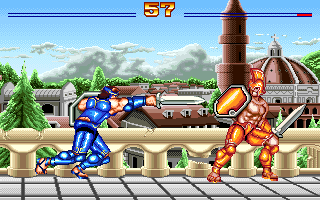 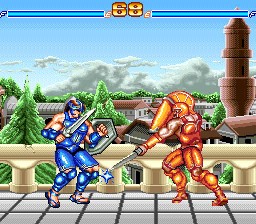 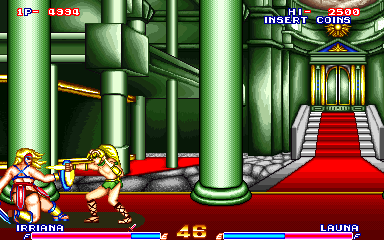 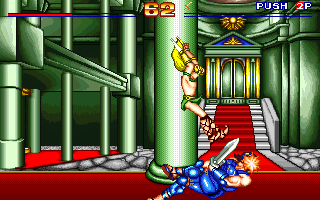 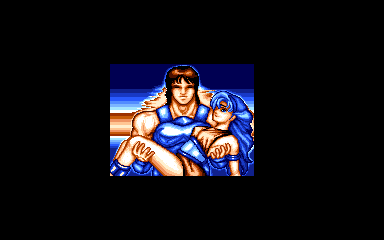 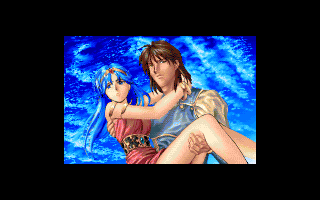 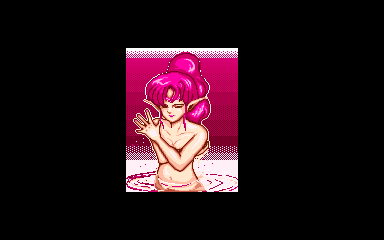 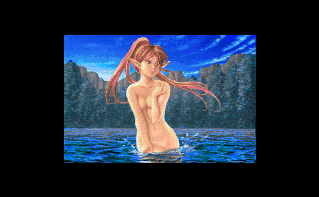 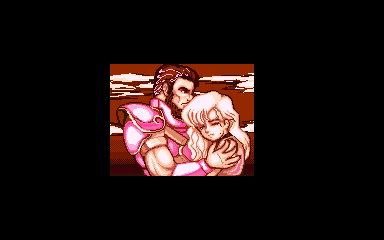 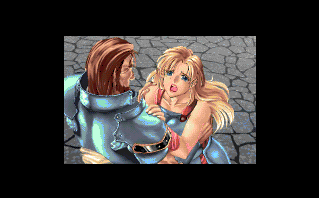 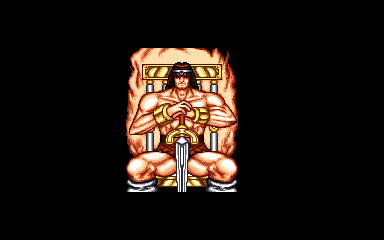 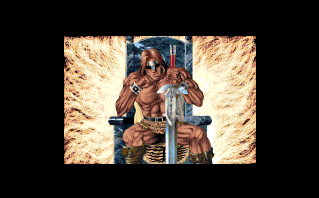