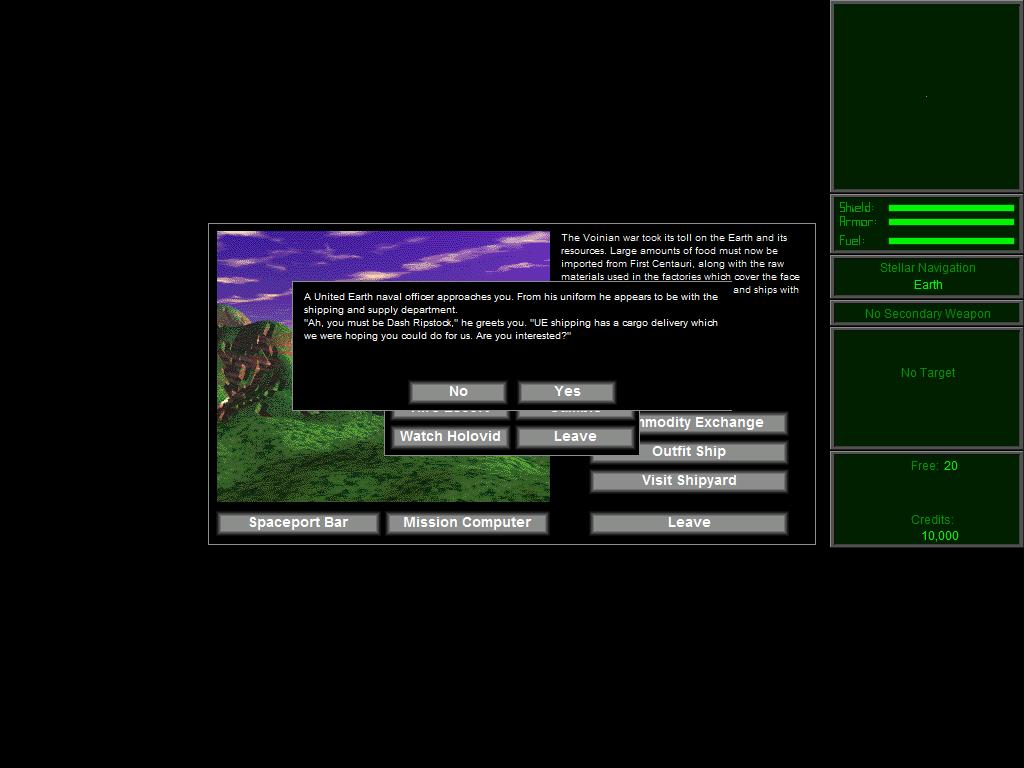 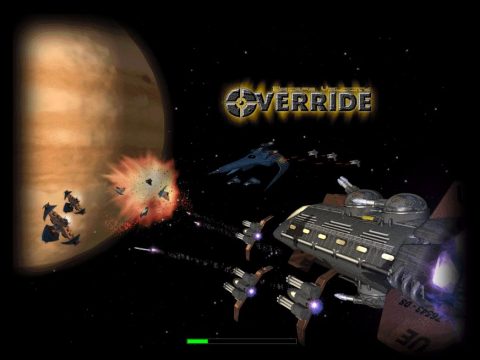 Escape Velocity: Override is a perfect example of a game that took an awesome concept that was well executed and made it even better. It basically takes all the aspects that made EV great and expands in almost every area. The universe is larger (around 2-3 times larger), there are more governments (from 2 main governments to around 6 or 7 main governments), more complex plots (as a result of more governments), more ships, more ways to outfit your ships, and FAR more missions and mission strings.

The (primary) plot of the game takes place in 2156, nearly 90 years before the original Escape Velocity. Currently, the humans are in the middle of the war between the alien race mentioned in the first game (known in this game as the “Voinians”), and instead of the confederacy, the humans are called “UE”, or “United Earth”. Your character’s back story is still the same, you start with a shuttle on Earth, and you have to go out and make your fortune.

The gameplay mechanics are also still very much the same. You can buy/sell commodities, take missions, etc, but the game is far more robust when it comes to missions. In the first game, most of the time you were given a variety of mission types by default and you could take these missions whenever and wherever you want. In EV:O, you usually have to find new governments to get new mission types, and usually have to be offered and complete a unique mission before you are offered the new mission types. This existed in the first game, but the options were very limited. Plot wise, there are also more alien races, and many of these races have different governments and their own wars, so the potential for more missions and alliances is more immense. 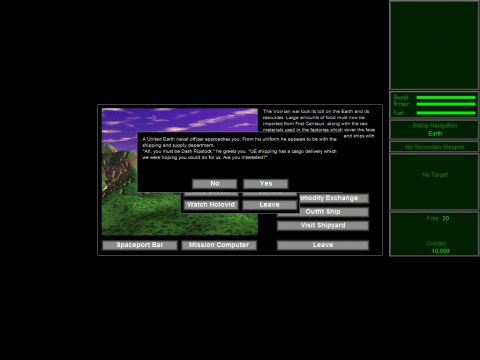 In addition to being larger, the game is more difficult: your early missions pay you less than in the first game, the ships are more expensive, and because there are more ships, the power base between ships has been spread out more evenly. Also, combat has been more refined to a point where certain weapons are more effective against certain ships, so you have to plan ahead when you are upgrading your ship to see if what you are doing is correct for the missions you might take.

Like EV, EV:O uses the same plug-in system, so, like EV, EV:O cannot be directly ported to Windows. However, also like EV, this lead to the creation of many original plug-ins from the fan community. (See the picture to the right with the Millennium Falcon and Corellian Corvette from Star Wars.) This adds to the replay value even more than the first game, since the base game that all plug-ins are based on are more detailed than before.

The game also featured a unique way to get people to pay for the game. In the original EV, if you did not register the game, a guy named Captain Hector would fly onto your screen and remind you to register. In EV:O, he not only reminds you to pay up, but if you don’t cough up the cash, Captain Hector will steal about half of your ingame fortune from you at random points in the game. However, the game is well worth the $25 for it, so it’s usually best to lay out the cash up front, and save yourself from any potential aggravation down the road.