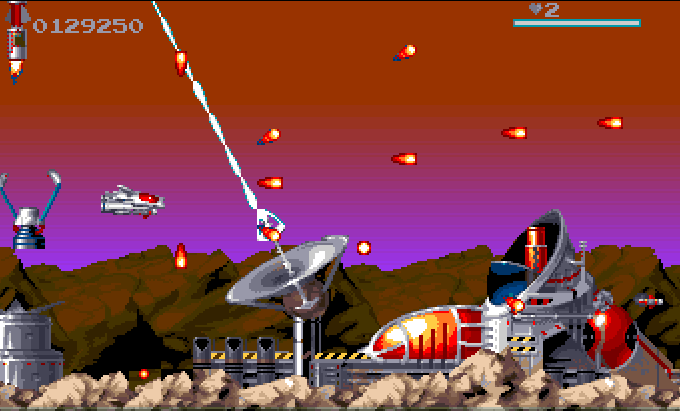 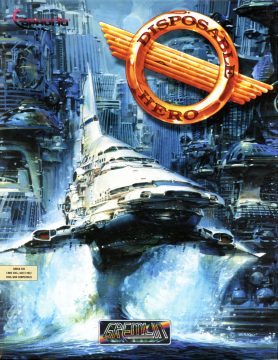 Dutch development team Boys without Brains, at the time still in their teens, released their first game Hawkeye on the Commodore 64 in 1988. Hawkeye, a Rygar inspired run-and-gun game, showcased their talent and was the first on the system to feature parallax scrolling. After releasing the platformer Flimbo’s Quest in 1990, the Boys moved to the Commodore Amiga to work on their most impressive game yet: Disposable Hero. Inspired by games like Salamander, Gradius and R-type, their mission was simple: to create the very best and technically most advanced Amiga shoot-em-up. For two years, the Boys Without Brains worked tirelessly on Disposable Hero. Without corporate deadlines or creative restraints, the final product was both a labor of love and an impressive achievement. Disposable Hero was released through publisher Gremlin Graphics in 1993 with a rerelease for the Amiga CD32 following in 1994 featuring similar graphics but a new soundtrack and some difficulty tweaks.

The story of Disposable Hero, told through animated cutscenes, tells the familiar tale of humanity under threat by an alien race. 2879 A.D. An elite combat group called D-Hero remains earth’s final hope and launches a prototype warship to take the fight to the aliens. The intro sequence, with its opening credits and a Terminator 2 inspired soundtrack, does a good job in setting the mood. The title screen is noteworthy for its depiction of a rotating polygonal model of the prototype ship and a scruffy dude, presumably the pilot, who looks all but the typical hero expected to save the day. 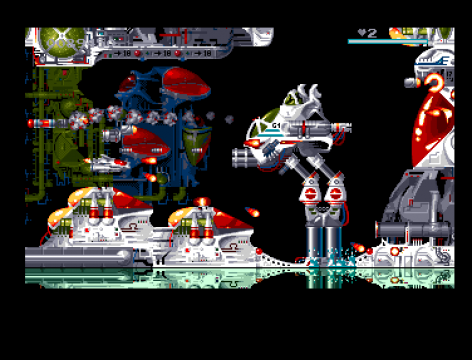 The game features five levels and a final boss stage to blast through, with end bosses and midbosses as you go through it. The levels consist of an industrial stage, a Giger-inspired stage inside a huge alien creature, an alien breeding facility, an underwater stage and one on the surface of an alien planet. The final boss stage starts with an escape scene in a launch tube and ends at an alien hive.

Visually, the Boys without Brains nailed it. The pixel-art is superb with creative and unique enemy and level designs. The bosses in particular are a feast for the eyes with the specimen of level two, a huge skull with the teeth of a saber tooth tiger, the tusks of mammoth and the horn of a rhino being particularly memorable. In 2015, this particular boss was reimagined in an awesome painting made by graphics artist Edwin van den Heuvel. 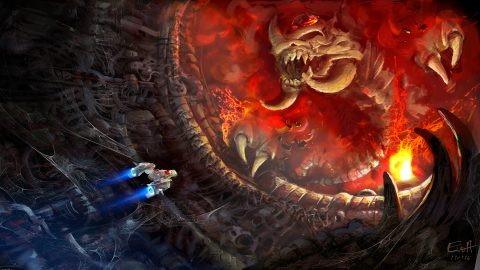 Due to the Amiga’s hardware limitations in managing colorful parallax layers, the team deliberately decided to have as many colors on screen (32) as possible as opposed to utilizing parallax scrolling. This decision resulted in attractive artwork and the fact that they managed to pull this off is all the more impressive considering that few action games on the Amiga achieved a smooth framerate with 32 colors on screen. 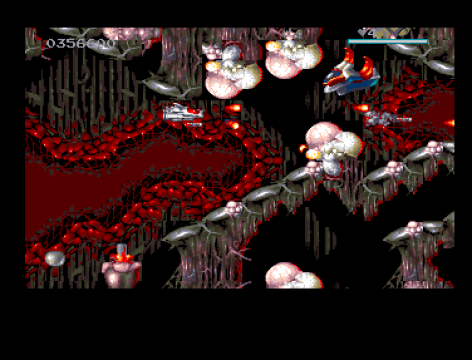 The evocative pixel-art is enhanced by very fluid sprite and background animations and various kinds of graphical effects. In the first level flying low over water rewards the player with delightful ship reflections, and when various huge mechanical walkers tramp their way across the screen, each footstep is marked with water splashes. It is the abundance of small details, like rotating fans or pulsating alien hearts which bring the game to life. The team went to great lengths to achieve these effects and used an anatomic book to get the best-looking animations for walking enemies. Programmer Mario van Zeist recalls to he constantly challenged himself to display as many effects on screen as possible, aiming for a maximum CPU and graphics co-processor load at all times while maintaining 50 frames per second.

Disposable Hero features fantastic box art depicting a space ship hovering over water against the backdrop of a futuristic city. It was painted by American artist John Berkey, famous for painting book covers and movie posters for films like Star Wars, King Kong and Star Trek: The Motion Picture. After the team stumbled across this particular painting, they contacted Berkey who agreed to send a projector slide with the image to the Netherlands. Using borrowed equipment, the team scanned the image and the resulting file size was so incredibly huge (for the time) that it took nearly 15 minutes to load into Photoshop. Afterwards, the logo of Disposable Hero, heavily “inspired” by the logo of the 1992 World of Amiga computer expo, was superimposed on the painting. 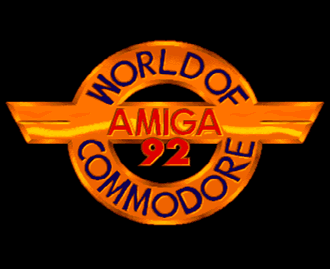 The in-game music of Disposable Hero, composed by Rick Hoekman, mostly consists of upbeat electronic tracks with a typical early 1990s vibe making excellent use of the Amiga soundchip. While the music can’t fully match the game’s graphical brilliance, it sets the right tone and fits the game well. The redbook audio soundtrack of the CD-32 version, written by Jeroen Kimmel, features a new score with a similar electronic vibe but with a richer and more produced sound. This soundtrack is also excellent although not necessarily better. Sound-effects in Disposable Hero are well done with many unique effects for different enemies and a satisfying array of voluminous explosions. A curious omission is the sound of your own weaponry, which does make firing your weapon feel a bit less impactful.

The game’s power-up system is worthy of note. Rather than simply picking up new weapons you collect blueprints for a total of a staggering 32 different weapons as well as upgrades to the maximum amount of power your ship can unleash at a time. Once you reach a power-up bay, which are scattered through the levels, you can add or remove weapons so as to maximize your attack capabilities. The arsenal is solid and includes horizontal, diagonal and vertical lasers, various types rockets, bombs, a shield and a turret which auto-targets enemies. Mario van Zeist remembers he programmed the weapon combinations in such a way that the hardware could always handle the graphical load without slowdown. Later in the game, a second ship becomes available to the player. 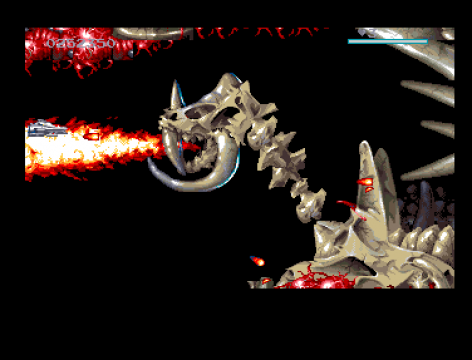 Gameplay wise, there is a lot of fun to be had with Disposable Hero. The game features tight controls, a delightfully small hitbox, auto-fire, a fair checkpoint system and nice weapon and enemy variety. This is the type of shooter in which memorizing level layouts is key for progressing. This makes gameplay rewarding as the more you practice the further you get. The uniqueness of Disposable Hero’s power-up system and the ability to choose between ships allows for a lot of experimenting and greatly enhances the game’s replay value. The downside of the power-up system is that its results in frequent gameplay interruptions. Even if you don’t want to change your weapon loadout, you will be entering power-up bays because doing so partly replenishes your ship’s energy.

When Disposable Hero was released, it received favorable reviews yet was considered by many to be too difficult. The main reason is that enemy bullets move very fast and are almost always aimed at the player. This lends the game a twitchy feel and when bullets are flying towards you from multiple angles weaving through them unscathed can be nearly impossible. This is particularly challenging during boss fight where, as a consequence, finding a safe spot is often the key to success. Disposable Hero ‘solves’ this through an energy bar, but in hindsight having slower bullets would probably have worked better. The difficulty is further enhanced by the fact that enemies move fast and take multiple hits to kill regardless of your firepower. The CD-32 version partly rectified these issues by reducing enemy bullets and hit points, resulting in a more enjoyable gaming experience overall. Yet choosing which enemies to target and which ones to evade remains an integral part of the gameplay as popcorn enemies also remain absent in this version. 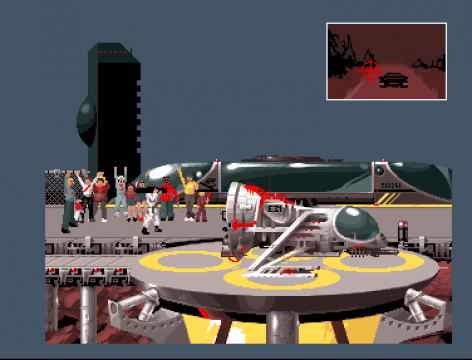 Disposable Hero might possibly have the most unique ending of any shooter. After completing the game, the player is treated with animated cutscenes depicting how our hero lands his space ship alongside a cheering crowd. After vacating his plane, he enters a car and drives away. All this time, however, an agent with a bazooka was waiting in the crowd and when the car races towards the horizon he fires his shot ‘disposing’ of our hero. The final shot depicts the agent maliciously smiling in the camera.

Alongside the brilliant Apidya, Disposable Hero is often considered as contender for the best horizontal shooter on the Amiga. This is for good reason and it is a pity that the game was not never ported to other platforms. The team actually considered doing a Genesis / Megadrive port, but the high costs of a development kit made this impossible. One cannot help but wonder how such a port, with the extended color pallete and extra graphical horsepower of the Genesis / Mega Drive, would have turned out, especially if the team would have had support in smoothing out gameplay mechanics. Even so, Disposable Hero on the Amiga is still a fantastic game in its own right, as long as you’re fine with the difficulty level.

Thanks to Boys without Brains members Mario van Zeist, Jacco van ’t Riet and Laurens van der Donk for sharing their memories for this article.