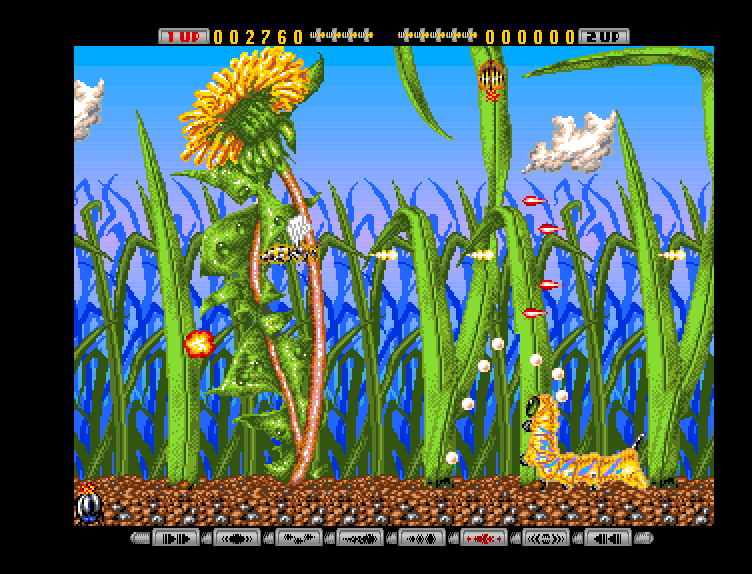 The folks at German developer Kaiko were huge fans of Japanese video games and aspired to give their own games the special look and feel associated with those produced by the likes of Taito, Jaleco, Namco and Sega. At first glance Apidya therefore appears to be a Japanese title on a platform, the Amiga, that totally lacked support from Japanese developers. Visually the Japanese inspiration is apparent in Apidya’s intro and ending animations, which uses anime-style graphics, and the opening screen, which boasts anime-style characters.

Actually, the real name of the game is Apidya II even though there’s no first part. In the day rumors went that Apidya was actually the sequel to a mysterious unknown Japanese shooter. Years later, Kaiko staff explained that this was precisely what they hoped to achieve with the game’s title. Apidya was developed by a core team of three persons in the course of two years. The team constantly struggled to finish the game due to a lack of cash. To get the necessary funds, they resorted to making some quick games which were sold to magazines. Apidya started out as a space shooter, codenamed Beyond the Planet’ before the team decided to go with the insects-theme. The name Apidya was derived from the Greek ‘Hexapoda‘, which refers to six-legged insects. The title screen presents Apidya as an ‘A.U.D.I.O.S.’ production (Art Under Design, Imaginations Of Sound) which was the original name of Kaiko. 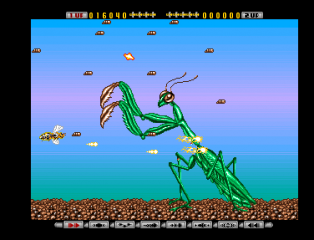 The game’s story revolves around Ikuro, whose wife Yuri is attacked and poisoned by a swarm of mutated insects by Hexaä, an evil lord of black magic. Ikuro uses magic to transform into a deadly bee and vows to find an antidote for Yuri and wreak revenge on Hexaä. This somewhat bizarre backstory forms the backdrop of Apidya’s premise which sees the player controlling a magical bee to fight hordes of evil insects. Although shooters like Insector-X and Bio-Hazard Battle also featured insects, this was certainly a novel idea on the Amiga.

Apidya stays very close to the mechanics pioneered by Gradius and R-Type which were game series that the team at Kaiko cited as main sources of inspiration. It features a Gradius-style bar system which can be powered up by destroying certain enemies that leave a power-up in the form of a flower. In addition to the usual speedups and shields, you can get two types of missiles (between which you can switch by selecting the same extra again), up to two little helper bees (that act like the Options from Gradius but with less fire power) and one of three main shot enhancements. There is also a charge weapon, similar to the ‘beam’ weapon in R-Type. If the fire button is briefly held down, the bee produces a rattling sound. Releasing fire will then cause the bee to fire a powerful giant bee stinger.

While these mechanics are certainly not original, they are particularly well implemented here. The collision detection is spot-on, enemies and attack patterns are diverse and much thought went into the level design. Kaiko knew what makes a shooter fun to play. On these merits alone, Apidya stands head and shoulders over most other Amiga shooters which in terms of design and gameplay tended to be subpar compared to their Japanese counterparts. In addition to an alternating two player mode, the game also offers a cooperative mode in which the second player controls an invulnerable little helper bee offering some (limited) additional firepower. 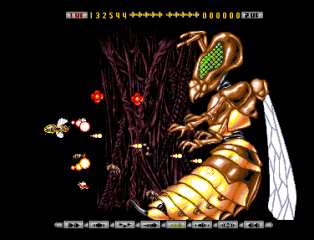 Apidya boasts five long themed stages: a meadow, a pond, a sewer filled with mutated enemies, a ‘sci-fi’ level and a final stage where the player must battle five final bosses. The first two stages feature insects and water-life, including giant snails, mosquitos, ladybirds, ants and various types of fish. This is thematically similar to Hot-B’s shooter Insector-X (closer to its more realistic Genesis version compared to its cutesy arcade incarnation.) As the game progresses, the stages and enemies become increasingly supernatural. By the time the player reaches stage four the player’s bee is inexplicably mechanized and enemies consists of robotic insects and turrets. It’s very reminiscent of R-Type, which is certainly no bad thing, but stylistically it comes across as quite a contrast to the rest of the game. The final boss rush stage takes place in a Giger inspired setting comprising all manner of bizarre creatures. After defeating the end boss, a huge hornet the height of the screen, the player is treated with an animated end sequence. There are also five secret bonus levels. These can be accessed by performing special tasks at certain points in the game, like flying into the mouth of the large pike or diving into the dead rat in the sewers. For years, a bug in the collision detection meant that activating the one on level four was impossible. A patch released in 2008 solved this issue.

Graphically, Apidya is attractive with colorful and well-drawn pixel art, smooth scrolling and detailed animations. The depictions of European insects and other animals in the first two stages are all accurate and are based on the biology book used by graphics arts Frank Matzke. Some of the bosses are particularly imaginative and even somewhat macabre, like the sprouting maggots from a dead rat carcass or the huge demonic doll which shoots laser beams from its eyes. The game features some cool graphical trickery like the wave effect in bonus stage 3-1 which warps two parallax layers independently of each other or the flip effect in the sewer level which turns the screen up-side down when the player touches poisonous fumes. Most impressive, however, is the animated parallax scrolling in stage four which looks fantastic and adds to that level’s mechanical feel. 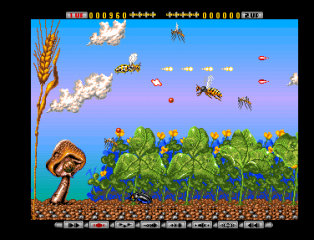 Legendary composer Chris Hülsbeck, who also wrote the brilliant scores of Jim Power and the Turrican series, did a truly wonderful job with Apidya. The in-game sound effects fit the game with satisfying shooting and explosion sounds. Each stage has its own theme song, and each of the substages features a differently arranged version of it. All tunes are memorable and the music elevates an already great game to new heights. Apidya’s title and end credit songs use a custom-made sound engine developed by Chris Hülsbeck to play seven voices simultaneously, while the Amiga natively only supports four audio channels. Hülsbeck clearly knew he had something special as a high-quality arrangement of the soundtrack was released as a CD album in 1992. Over the years, there have been several live performances of Apidya’s music (as well as many of Hülsbeck’s other works) by symphonic orchestras.

A welcome addition that is quite unusual for Amiga games is the console-style options menu. The ability to listen to the game’s soundtrack is fantastic but it is the option to set the controls to gamepad that is really a game changer. This addresses one of the Amiga’s main limitations, which is its one button joystick standard. In Apidya players can use a Mega Drive controller and use the second button for activating power-ups. The game’s fast-paced action means that reaching for the spacebar to activate power-ups is a risky undertaking so this feature comes in very handy. The game also features a decent auto-power up option which is the preferred method for poor souls with a standard one button joystick. Playing Apidya without auto fire is not recommended and given the abundance of game options, it is somewhat of a let-down that this was not included in the game.

If Apidya has a real fault, however, it must be its difficulty level. Even on easy, which only allows the first four stages to be played, the game is still very challenging. Every time you die, your weapon power decreases and if you die two times in a row, you revert back to your standard pea shooter. In later levels it becomes really though to recover due to the game’s relentless difficulty and scarcity of power ups. The main problem with the Apidya’s difficulty, however, lies in the high speed of certain bullets and enemies. In some parts, environmental hazards that leave little room to maneuver further add to the challenge. 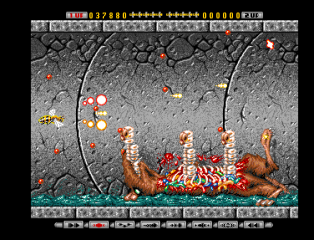 Playing Apidya in modern times is actually much more fun on an emulator than on a real Amiga, as the use of save-states allows for practicing particularly difficult areas and bosses. Keep in mind, however, that even with the use of save-states a 1CC is still very difficult to achieve. Apidya was very well received at the time and over the years earned something of a cult following. In 2002 an unofficial Windows remake of the first level was released and in 2007 a technical demo of the game for the Game Boy Advance appeared. Neither were ever completed. Overall, Apidya is arguably the best horizontal shoot-em-up ever released for the Amiga platform and remains enjoyable to this day.