Terranigma represents the engine introduced by Soul Blazer coming full circle. It returns more to the style of the first game, bringing the elements of resurrecting people and places back in full force, while still retaining the solid presentational aspects introduced by Illusion of Gaia. In many ways, it’s the best of both worlds, and remains one of the most talked about and sought-after titles of the 16-bit era. 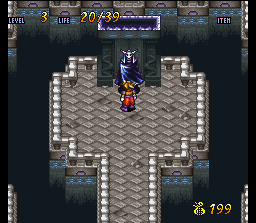 Unfortunately, Terranigma was released very late in the twilight of SNES’s life. Like so many others, us US gamers were denied of it, reduced to drooling over screenshots in GameFan and getting screwed with overpriced imports. Oddly enough, Terranigma was released in PAL territories, and remained heavily uncensored, with outright references to religion and use of alcohol. Unfortunately, without a system modification, a European cartridge will not work on American systems. 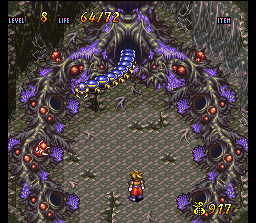 The subterranean world of Terranigma introduces us to another down-to-earth youngster poised for adventure. Ark is very similar to Will, but he’s far more brash, cocky, and mischievous. This tends to get Ark into a lot of trouble. In particular, he ends up accidentally turning everyone in his village to stone, including his sweetheart, Elle, after discovering a strange creature named Yomi in the basement of the town elder’s house. Naturally, Ark must redeem himself. To accomplish this, he must visit a succession of towers in the area. Each one holds the key to releasing some of the villagers from the curse, but also, restoring one of the lost continents on the barren world above. Thusly, Ark’s quest to merely restore life to the villagers is tied directly to a larger quest to restore life to the entire planet surface. 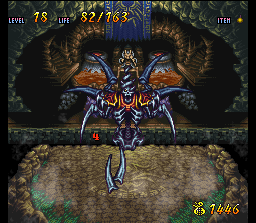 Unfortunately, Terranigma‘s story loses something right after it begins. It’s never fully explored and it loses track of its characters for long stretches of time, sometimes forever. This is in stark contrast to Illusion of Gaia, whose story and its relationships between characters remained a central element from start to finish. Terranigma‘s story really does begin to pick up toward the end, however, with a few surprising twists and turns and some fairly profound notions of philosophy and existence (for a 16-bit game, anyway). 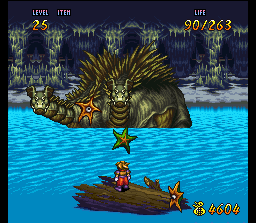 As mentioned, Terranigma plays a lot more like Soul Blazer, with Ark traveling from one area to another, reviving the creatures and restoring order to the destroyed world. In comparison to Illusion of Gaia, it’s much more formulaic in its design (like Soul Blazer), but a lot less restricting. There’s two world maps to explore and lots of optional quests to embark on, including one that leads to a programmer’s room. One of the programmers even jokes about the series’ implied continuity by referring to Terranigma as “Illusion of Gaia 2”. But once again, like Soul Blazer, it feels like you’re constantly repeating the same scenario, only with birds or mammals instead of people. Still, the somewhat Zelda-esque dungeon design and overall structure of the game make it quite fun to play. 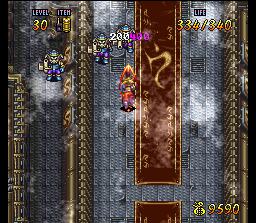 The high point of Terranigma is its much more refined play mechanics. The combat in particular is leaps and bounds above Illusion of Gaia‘s. Ark uses a variety of lances, and he has many techniques to use when wielding them. You can make him rapidly thrust by mashing the attack button, lunge by running and then attacking, dive bomb enemies by running, leaping, then attacking, block projectiles with a cross guard maneuver, and he has a really cool mid-air spin attack. Certain enemies can only be hurt by certain attacks. For example, foes that burrow underground can only be hurt by the dive bomb attack, and others can only be hurt by the standard attack. Also, some of Ark’s lances are elemental in nature, causing additional damage to enemies weak against a certain type of element, or even destroying certain obstacles that block his way. 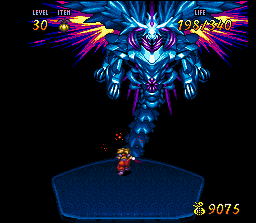 EXP-based leveling has returned from Soul Blazer. The interesting thing this time around is how dramatic a change each level represents. If you encounter a boss at a certain level, you might not stand a chance, but after leveling up just once or twice, you’ll completely dominate it. This isn’t really a problem or a blessing, but over-leveling just a tad can make most of the encounters in the game quite dull. Ark can also use magic, but not by the typical means of merely learning it and using it at his leisure. Magic must be bought and stored in Magirocks, which are found all over the place. Once you use a spell stored in a Magirock, it’s gone, and you’ll have to buy another. Luckily, magic is pretty much useless, so if you find this system cumbersome, you can easily ignore it and it wont make the game any more difficult. 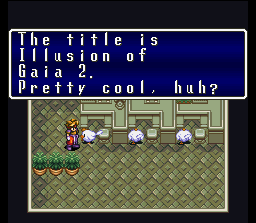 One of the more touted elements of Terranigma is its magical item box which Ark can leap inside of to explore his equipment storages and miscellaneous data. There really isn’t anything special about this. It’s just a neat little way to present the standard RPG menu-system, and it gets equally repetitive as you find yourself visiting it every few minutes to change equipment. 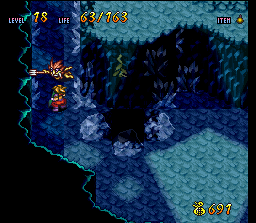 Terranigma also has a pretty large sim-element. It takes some of the basic ideas from Soul Blazer‘s town progression but goes into much, much more depth. Several towns in the game can be expanded upon. But in order for this to happen, you need to increase the town’s growth index and help with their economy. A small village can grow to a bustling epicenter of trade if you perform enough tasks for the villagers. These usually involve taking pictures of the town and submitting them to tourism agencies, taking goods from one town and introducing them to others, and generally helping people out. Doing so will allow the towns to offer more services and better items in their shops. 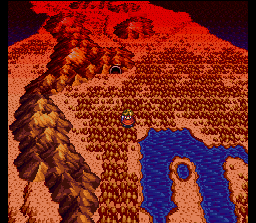 In terms of presentation, Terranigma looks more like a souped up Soul Blazer, with smaller character sprites and a distanced perspective in comparison to Illusion of Gaia. The graphics range from spectacular to bland in regular spurts. The opening areas of the game are rather strong to suck you in. After awhile, however, the game really loses its inspiration, and you’ll find yourself drudging through cave after identical cave, forest after identical forest. The sprite animation is quite nice, especially for Ark and some of the bosses, but other than that, Terranigma‘s visuals don’t quite live up to the standards of most of its breathtaking late SFC/SNES contemporaries.

In the audio department, however, Terranigma completely triumphs. While none of the individual tracks quite encompass the awesomeness of themes like Larai Cliff or Sky Garden from Illusion of Gaia, Kobayashi and Hikichi’s overall soundtrack stands on the Olympus of SNES scores, right alongside Final Fantasy, Chrono Trigger, and other great works of the era. In particular, the overworld themes are incredible, setting a very somber tone. Some of the dungeon themes are also extremely brooding. 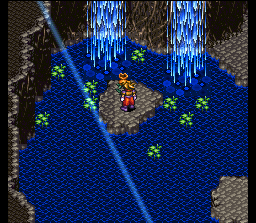 Overall, Terranigma is one of the better action RPGs on SNES, though it could’ve used some polish. All around, it’s probably the best of the three SNES Soul Blazer games, as its gameplay depth and length far exceed what Illusion of Gaia and Soul Blazer have to offer.