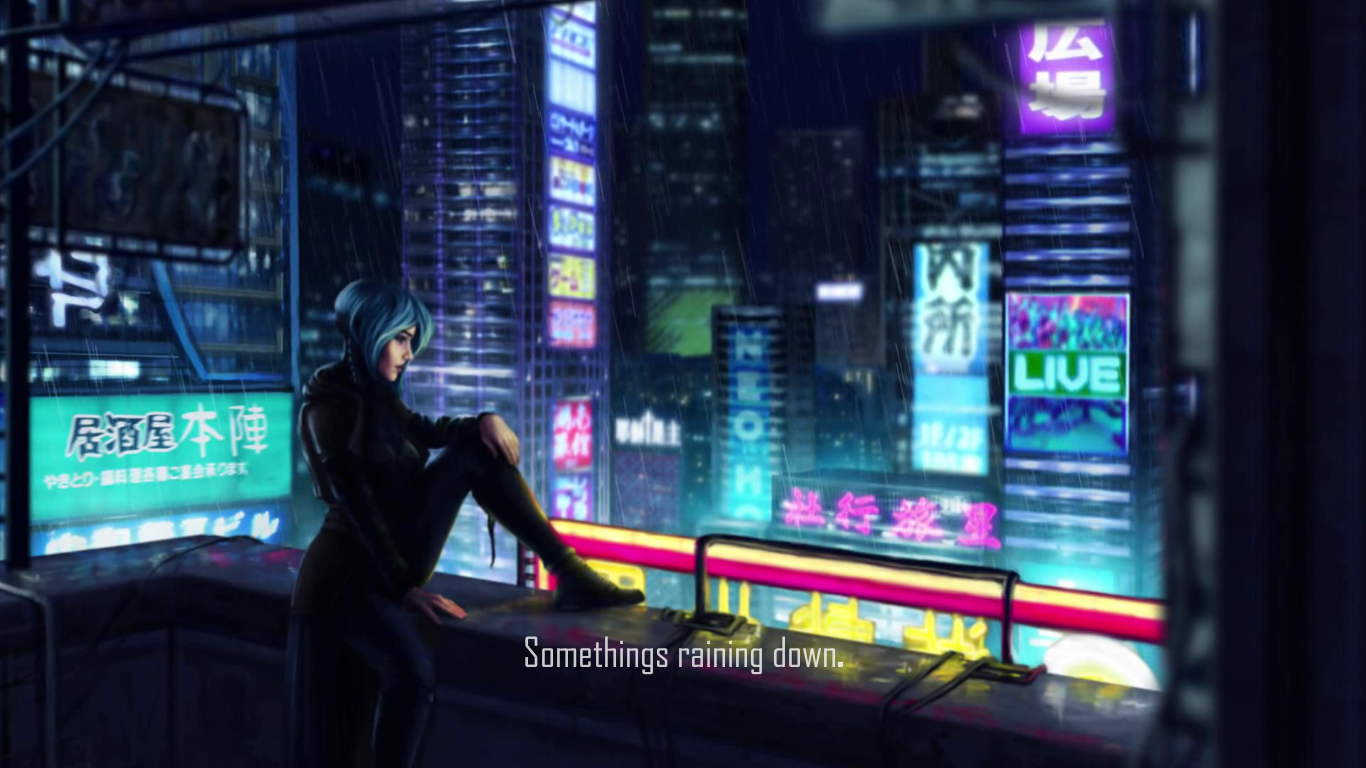 There’s been an interesting development in the last decade among indie and smaller studios. As entire types of play and world-building have become almost entirely associated with single franchises, more and more games have come around promising the same sort of experience with some sort of spin to them. They’re not so much rip-offs as attempts to create something new from something popular and get eyes on their work through the initial inspiration. This is why the “souls-like” craze has been so positively met, as transitioning Dark Souls style mythology and mechanics to 2D spaces allow for interesting new fusions of familiar play styles. Dex, a 2015 release from the small studio Dreadlocks, attempts to do something similar with the immersive sim and cyberpunk genres most often associated with Deus Ex today, and despite being such a low budget project, it succeeds with most of its ambitions. That doesn’t mean there isn’t problems, though. The game is an impressive first go, but it feels like it’s missing some meat – and unfortunately, we may never get proper expansion due to the game’s lead designer passing away shortly after the full version came out of early access. 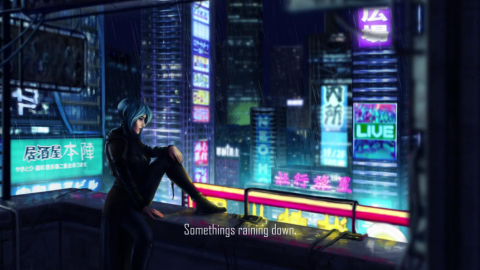 Jan Jirkovský passed away at the age of 26, just a few months after the project he brainstormed reached some sort of completed status. It was sudden kidney failure, surprising everyone. There’s a memorial hologram of him juggling placed in the game’s world as of now, one that seemed random on first playthrough until you hit the credits. Dex was Jirkovský’s baby, both in game design and even writing, an attempt to create a cyberpunk work he could be proud to put alongside other greats in the genre. Despite all of Dex‘s issues, it’s an impressive bit of ambition met in many ways, and while Jirkovský’s death was tragic, at least he managed to live long enough to see this passion project finished. It’s also good to see the rest of Dreadlocks managed to complete their crowdfunding promises and made sure one couldn’t forget who’s game this truly was first and foremost.

The story in Dex has a very familiar cyberpunk set-up. The titular heroine Dex is watching the rain fall and waxing poetically to herself as a group of armed men start storming her apartment building. She’s guided out by a mysterious voice calling itself “Raycast” that directs her to safety, though not without issues. Dex eventually meets up with Decker and Tony, two hackers who inform her that Raycast is the world’s most famous hacker, with Raycast soon revealing after that an organization called “The Complex” are after Dex. This mysterious conspiracy group has their tentacles in industries and governments all over the world, and if they’re willing to send armed thugs after Dex, it’s safe to say she’s either important to their plans or a danger to their manipulations. It becomes apparent why once Dex shows off an innate talent of her’s with Raycast’s direction, managing to hack a device with just her mind. She needs to survive, but as the game goes on, the goals shift to stopping the bigger plans of The Complex for the good of the world, the ticking clock supplied by how quickly The Complex may gain re-control over a world altering A.I. 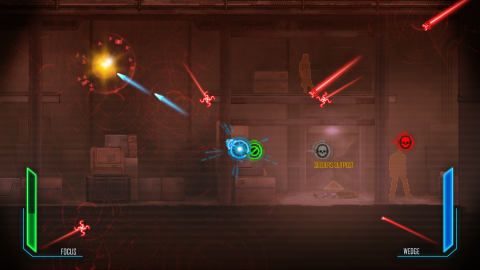 Dex‘s biggest issues mostly stem from the main narrative. The world-building and side character writing is pretty solid to immensely entertaining , giving us a city filled with colorful characters to chat with and do work for. The cyberpunk themes of anti-capitalism and rebellion are in full effect, with some humorous satire sprinkled around, though there’s some stumbling when it comes to portraying a few ethnic characters and sex workers. There’s an attempt to give several characters accents and particular speaking styles based on their given race or possible country of origin, but the voice direction has a habit of tripping into questionable territory, particularly with the mother of a Chinese sex worker in an early side quest. That quest also revolves around an entire prostitution and sex slave industry based on getting non-augmented young people on drugs, which feeds into a lot of regressive stereotypes used to demonize real world sex workers.

Thankfully, other side quests manage darker or more mature subject matter better, usually with a black comedy bent to it, like one side quest about an obsessive fan trying to become her singing idol. It’s not a particularly thought provoking game, but it manages to entertain with a great sense of personality. Dex does get some fun select-able dialog too, letting you roleplay a good deal, but that’s where the main story starts to interfere. Despite putting a focus on roleplay and choices in side quests and main story quests, the few cutscenes present give Dex a voice. 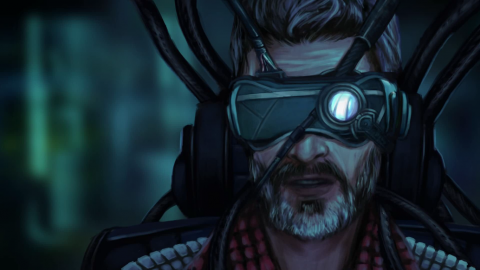 This isn’t a huge deal most of the time, but this does result in the game pushing hard for a Dex and Decker relationship that doesn’t fit in the game at all. There’s no day and night cycle nor sense of the passage of time, so it feels like the game is taking place over one night. Add in that there’s only two main story missions after the straight forward find shelter opening (getting augmented might as well just be side content for as much as it adds to the story), and the two forming a romantic bond doesn’t really work. A one sided thing with Decker would be fine, but there’s a push with Dex as well that doesn’t fit with either the story or game design’s focus on player choice and expression. The main themes at work also don’t really bother to tread new ground or do anything particularly interesting with all the old ideas of transhumanism and artificial intelligence, with three really weak endings to choose from, one just sort of stopping the game with little fanfare.

All that said, the game is a fun sixteen hour romp, thanks to the stellar presentation and impressive design and mechanics. The art team went above and beyond, crafting these beautiful, grungy urban centers to explore filled with neon and well animated minor CPU sprites. Harbour Prime is a truly lived in place, divided into different segments with their own flavors and class divides, ranging from depressing slums to a sleaze filled red light district. Just traveling around this city can be engrossing, so much so that you may not want to use the auto-travel system. The music is also a really inspired choice, foregoing a techno or synth heavy sound for fully orchestrated pieces with choir backing. There’s no lyrics, but instead droning to create a sort of unearthly sound. The pieces fit far better in the setting than you’d think, becoming sort of leitmotifs for Dex herself and not just the places she visits. 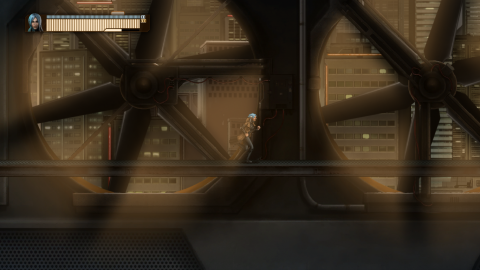 Controlling Dex is also a delight in and of itself. She has solid weight and speed, making platforming fairly easy to get the hang of, especially with the generous ledge grab she performs automatically. Moving across the roof tops, especially when you get leg enhancements, becomes a ton of fun, especially with the secrets hidden around, allowing you to actually make progress on later quests as early as finally getting free reign to travel. Her combat options are similar to the ones from Deus Ex, though she also has straight up brawling as a viable option. Dex’s punches start weak, but the get stronger with time, and with her dodge roll and block, she can navigate an enemy’s offense and take them out hand-to-hand to save resources, though this is not advised with large groups of enemies. Even then, you still have a takedown option if you get near an enemy when their back is turned, and guns can be used not only as offensive weapons but ways to draw enemies towards you. The trade off for guns, at least for early in the game, is that ammo is expensive, so experimenting with all your options is definitely recommended.

It’s a shame that stealth is treated mainly as an afterthought. Thanks to the 2D set-up, it can be difficult to tell where enemies are before they can see you without cheesing with your hacking powers, a limited option in the early game. Without the eight second cloaks, which are also expensive (and only an option with the proper augmentation), most areas in the game have limited options for getting the drop on someone outside the vent heavy main missions, which make up roughly 10% of the game. However, if you invest in the AR skill, you can use your hacking powers at any time, as long as you have focus points, to “hack” into a person and momentarily daze them. If you know how to use this power just right, you can bypass combat entirely – though there’s no reason to. A ton of experience comes from taking out enemies, so if you want to level up and improve your skills, you can’t just stealth or run past enemies. Like in the original Deus Ex, stealth is doable but also an afterthought. Oh, and yes, you can use your hacking powers to destroy security cameras and make turrets fire at enemies. 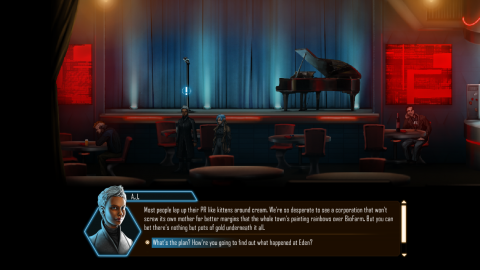 While most of the game is based around exploration and combat, hacking has an entire different play-style to shake things up. The idea is that whenever you press the hacking button for planet hacking, as proper hackermen and hackerwomen do, everything freezes and a round ship-like avatar appears. You can now move all across the screen in any direction with this avatar and hack in designated spots, the challenging being sticking in one spot as the hack works out and shooting viruses and programs as they swarm towards you. Thus, the game becomes a shoot-’em up with arcade style controls, complete with regular fire and one of three special shots that take bar to use. You can also buy and find one time use programs that can grant bonuses like shields and an enemy clearing bomb move. There are also hacking segments where you hack a computer, creating a new field to explore and infiltrate to find data and commit acts of planet hacking sabotage. It may seem like a gimmick, but this aspect of the game quickly becomes one of its most defining features, not to mention one of its most useful for dealing with large numbers of enemies if you know what you’re doing.

It’s worth noting the game went through a few changes over the years. It started with a grid based inventory system, yet another concept lifted from Deus Ex, but it was thankfully removed and replaced with an infinite one as the scope of the game grew. The original tries at limiting your ability to thrive is classic cyberpunk, but it doesn’t fit well in the 2D action set-up. The shift to constant progression was a good call, from investing in ridiculously useful augmentations, to improving your skill and stat trees to unlock more options and abilities, all the way to even having the option to find and buy permanent upgrades for your hacking secondary shots. While Dex‘s narrative is lacking and a tad half-baked, possibly due to the small size of the initial project forcing some cuts from the original plans, it has a rewarding gameplay loop that keeps you sucked in until the final mission is done. While it failed at its ambitions to be a 2D Deus Ex, what it ended up creating is an entertaining mixture of classic Metroidvania design, western role playing tropes, and cyberpunk adventure. Jan Jirkovský’s life was cut way too short, but at least he lived long enough to see this game finished, and I hope he found some pride in that accomplishment.