Taito, the company responsible for the creation of shoot-em-ups with the release of Space Invaders, has always had strong ties to the genre through its long history as a quirky arcade giant, with two of their most notable brands being the Darius and Rayforce series. Metal Black, one of the many off-shoots the company produced during the early 90s, is also considered one of their greats, due to its dark atmosphere and incredible music. 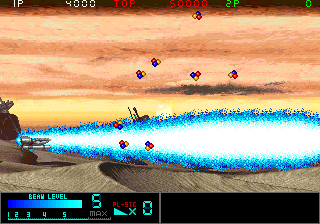 In the distant future of 2042 AD, a mysterious race of aliens originating from Nemesis, one of Jupiter’s moons, begin an onslaught on an environmentally-damaged Earth using massive laser beams as their weapons. After discovering and reverse-engineering the invaders’ power source – energy molecules known as “Newalones” (a Taito-ified spelling of Neurons, later corrected in Space Invaders Infinity Gene) – U.N. scientists kickstart the development of a new fighter craft named the Black Fly, whose weapons are powered by this new energy source. By 2052, the invention was finished and ready to deploy into outer space, but its use by the military was strictly forbidden by the peace treaty signed by the U.N. itself, who was afraid of starting an intergalactic war which could damage the environment even further. As a result, what was left of civilization was completely wrecked, leaving the dead planet’s last hope in the hands of a lone, rogue pilot and his stolen Black Fly. 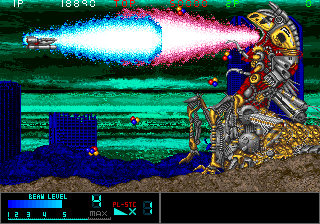 Such a cool premise also makes for some interesting gameplay mechanics. Your ship has a twin blaster that fires forward as its sole main weapon, and the iconic giant laser as its bomb. The power levels of both are indicated by a single gauge at the bottom of the screen (bottom-left for Player 1, bottom-right for Player 2) that you fill up by collecting Newalones – as you grab more and more of them, your standard shots get bigger and stronger and the gauge fills up. You can unleash your laser at any time you want, but when in full power it can be converted into a screen-clearing lightning attack upon releasing the button that triggered it (it’ll shoot straight as long as it’s held down, and you can easily switch between the two fire modes as your power level slowly decreases), but once you use it, it’s back to the peashooter. This, along with the facts that Newalones only spawn at certain points of the stages and that you’ll face several enemies who “eat” them, makes Metal Black‘s difficulty balance very unusual among shooters, as it isn’t about shooting and/or dodging everything that moves, but rather about resource management – the game tricks you into using the beam against bosses, but using it for crowd control is actually wiser, since “laser duels” will always be against your odds if your power level isn’t at 75% or more. 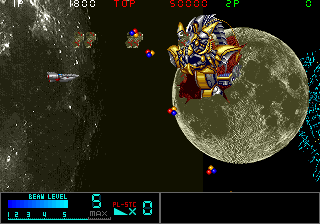 What gives Metal Black its must-play status, however, is what can only be described as a deep, dark atmosphere – a fantastic combination of graphics, sound, and gameplay gimmicks that perfectly channels the mood of a post-apocalyptic Earth and a sole pilot’s suicide mission to save it, while keeping that classic, exuberant Taito charm. The first stage, Down To Earth, is one of the most memorable in shooter history, presenting itself as a slow-paced flyby over a ruined coastal city, with only the slightest traces of civilization left (such as a still-functioning video billboard and a fallen battleship whose sudden movement reveals the hermit crab boss from Darius II hidden underneath it) that culminates in a battle against the kaiju-esque creepy-crawly Apartheid (yes, that’s really the first boss’s name), whose alien roar is one of the game’s most memorable sound effects. 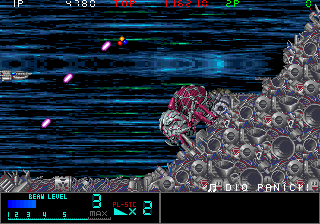 Stages 2 and 3 are arguably the most typical of the bunch, but it’s on Stage 4 – Crystal Lize – that things start to heat up. While the first three stages are fairly easy for shooter standards, Stage 4 presents a massive difficulty spike, with enemies coming from every possible corner of the screen (the game expects you to know that your powered-up shot’s hitbox is actually bigger than the Black Fly’s, making you nigh-invincible to enemy contact as long as you keep abusing the rapid-fire), annoying, bubble-like obstacles that hinder your movement and absorb your shots, very few Newalones to collect, and, the worst of all, narrow corridors to move through. You’ll probably waste a credit or two on this stage alone, but its boss battle – the mandatory R-Type-esque mothership battle, set against an exceedingly trippy background and a beautifully oppressive musical composition – makes it all worth it. 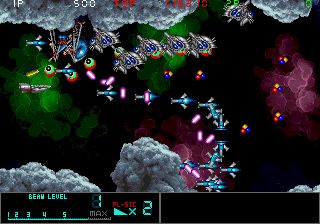 If you thought Pu·Li·Ru·La was trippy, wait until you get to Metal Black‘s last two stages. Stage 5, Nemesis Crisis, begins with a completely normal outer-space fly-by with Jupiter in the background before making you go inside Nemesis itself, even though real-life natural satellites probably don’t contain organic-looking green flooring inside them. At all. After a fight against a palette-swapped, teleporting Apartheid in an asteroid field, the game drags you into Stage 6, which is a very short mash-up of elements from the previous five stages (such as more Apartheid palette swaps) that quickly drops you into the final boss battle. But boy, what a boss battle! Apparently the mastermind behind the alien invasion is a gigantic, web-like being with a glowing heart that fires laser beams through its… er…private parts, spilling Newalones all over after being done with it (take that, R-Type!), and the player can only defeat it by damaging its core. Every few hits, the background cycles to various digitized pictures, such as a 2001-esque primitive man and a very creepy-looking cat, with the music changing accordingly to songs from previous points of your quest. The boss’s defeat leads to a massive explosion that cracks the Earth apart, but thankfully it’s also revealed that your whole outer-space adventure was nothing but a fetus’s dream. Yes, ladies and gentlemen, this is the best way to describe Metal Black‘s ending. There’s also a bad ending if you get a game over in Stage 6, where you get a small cutscene where the military coups the UN, sending a fleet of mass-produced Black Flies into Nemesis. 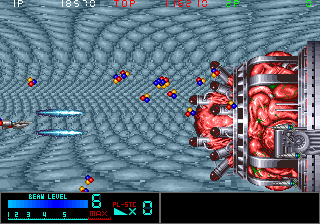 Metal Black‘s graphics are mind-blowing for a game released in 1991. The F1 board, much like the SNES, was built with hardware flexibility in mind, by supporting several expansion chips that augmented its capabilities in multiple ways. Metal Black uses one that adds assorted graphical effects, such as extra layers of scrolling and scaling, and they all work together in brilliant ways, adding life and depth to an otherwise bleak 2D world. The simple, crosshair shooter-esque bonus stages triggered after Stages 1 and 3 not only work as graphical showoffs, but also double as fancy playable cutscenes, as they show the Black Fly blasting off into space and penetrating the alien’s dimension, respectively. The most eye-catching are probably the trippy backgrounds, the Stage 2 boss intro, and the massive, flaming, globe-like explosion that marks the end of each stage. 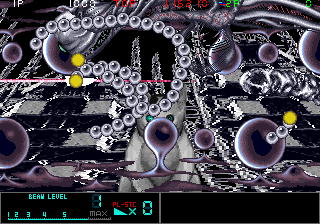 Even though it’s generally agreed upon that the soundtracks to Darius Gaiden and G-Darius are the apex of Zuntata’s repertoire, Metal Black‘s OST also deserves special mention in the sound team/in-house band’s history, since it perfectly complements the game’s atmosphere, and is awesome to boot. The first stage’s theme, “Born To Be Free”, is almost as popular of a shooter anthem as Gradius‘s “Challenger 1985” or Battle Garegga‘s “Fly To The Leaden Sky”, and the rest of the soundtrack is consistently excellent, shifting between several styles while keeping that classic Taito FM synth flair. The versions on the “The First” arrange album and Zuntata’s live shows are also excellent. It was composed by Zuntata regular Yasuhisa Watanabe. 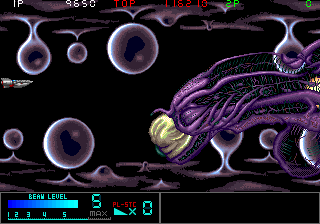 Perhaps the most cryptic element of Metal Black is its designation as “Project Gun Frontier 2” at the startup. Gun Frontier is a vertical shooter, released in 1990, whose gritty “cosmic wild west” setting showcased the graphical prowess of Taito’s advanced arcade hardware. Outside of sharing some of the same staff, though, the games are completely different. The plot used at Metal Black‘s internal pitch was tied to that of Gun Frontier due to the involvement of the Wild Lizards criminal gang in both. This was written only as a placeholder for internal use, since there were concerns that management would think the post-apocalyptic themes they wanted to feature in Metal Black were too dark. However, this “dummy story” was published in various forms, including in magazine previews. The official story of Metal Black, however, as told in a mini-comic and in the “The First” arrange CD, is completely different.

Metal Black was helmed by Takatsuna Senba, who had worked as a graphic artist on many other Taito games, including Darius II, Cadash, Cameltry, and SCI. Gun Frontier was the first game where he acted as the producer, director, and game designer, as well as working on the graphics. Metal Black was his second, and the third is the rather subpar dinosaur fighting game Dino Rex, marking the third and final “Project Gun Frontier” game. 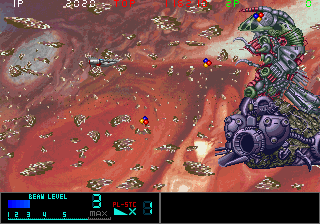 Metal Black was first ported to the Sega Saturn in 1997 thanks to Ving’s effort. While the game itself is just a bare-bones, arcade-perfect port, the manual is very nice, including not only the official plot but also the planned “Gun Frontier 2” storyline, and several cool illustrations spread throughout. The first (and only) port to reach Western shores was the emulated version present in the Taito Memories Joukan / Taito Legends 2 compilation for the PS2, PCs, and original Xbox. Since MAME already fully supported F1 games at the time of its release, Metal Black runs almost perfectly on it, except for one glaring flaw: you can’t re-focus your laser once it becomes the screen-clearing attack. This is one of the many control quirks these compilations are known for, and while it doesn’t affect normal gameplay much, it makes 1CCing the game much harder. Strangely enough though, this only affects the American and European PS2 releases – the laser works just fine in the Japanese PS2, Xbox and PC releases. The upscaled, filtered graphics aren’t quite as sharp as the Saturn port, either, which natively runs in 240p. 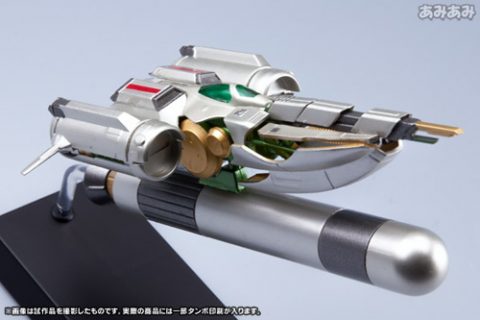 Besides the aforementioned “The First” arrange album, other pieces of merchandise tied to Metal Black includes a mini-manga explaining the plot in detail that was distributed to arcade owners around the time of the game’s release. A big, expensive, overly-detailed metal figurine (like the ones mostly reserved for mecha from anime and manga) of the Black Fly was released in 2008, among several other famous shoot-em-up spaceships such as the R-9, Vic Viper, R-GRAY, and Silver Hawk. A cheaper figure can be found in the Shooting Game Historica gashapon series. The game’s “laser dueling” mechanics were also implemented in the later games, particularly DariusBurst and G.rev’s Border Down. The Black Fly also appears in the mobile/downloadable title Space Invaders Infinity Gene as a DLC ship, with the game-breaking Newalone Laser as its sole weapon, and two extra stages included together.

There is also an exceedingly rare version of the game called Metal Black: Tarabar Edition. It’s named after one of the game’s programmers, who created this alternate version solely for internal use by himself or within Taito, as it was not released to the arcades. It’s missing most of the game, with only three stages in total, but there’s an exclusive “extra stage” that appears after the first level. Some of the music is different, with an exclusive track, plus the enemy patterns are more difficult.

Documents indicate that it may have been initially conceived as part of the Darius series – a sketch demo reel was found on Takatsuna Senba’s (now defunct) website, showing both Proco and Tiat, as well as indicating the name as “Darius Part 22”, indicated below. However it was never initially announced as such. Taito did slowly reveal plans for a “Darius III” but ultimately this ended up being renamed Darius Gaiden.