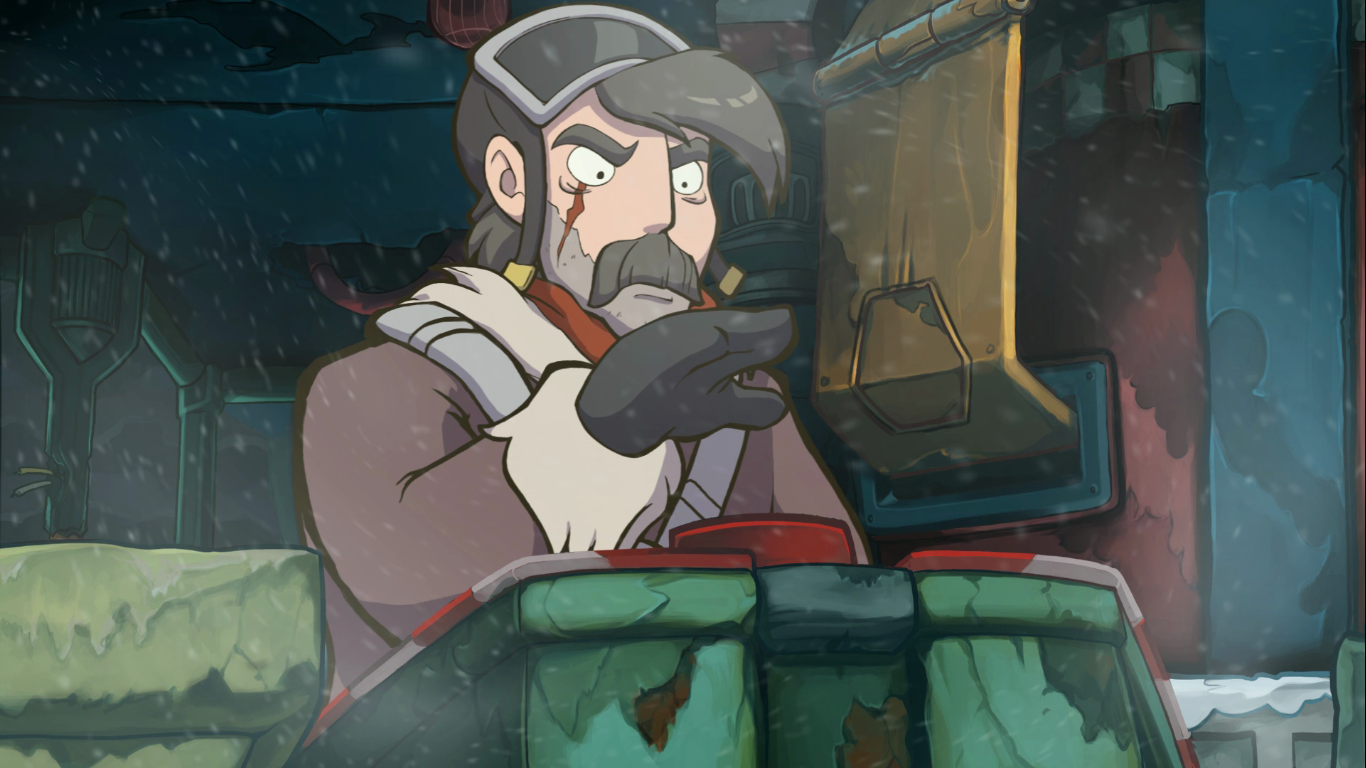 Deponia Doomsday was described as a “paralellic” by the developers. Basically, the game is meant to be sort of parallel to the original trilogy by using a time travel plot to let these events to take place in their own timeline (or timelines). It makes its intentions clear fairly quickly, as Goal gives a recap of the original trilogy, and then ends asking “Oh? You don’t like this ending? Hoping for something more upbeat?” Cue the opening tutorial, which breaks tradition of Rufus fixing a trash compactor to have a future Rufus in a dead future blowing up the entirety of Deponia, now overtaken by horrible monsters. The narrator appears for his last appearance, singing a song to his now ex he sang to in the original games. Where he came to terms with his ending relationship there, here he sings to this woman who wants to get back together and warns her the dangers of wondering “what if.” 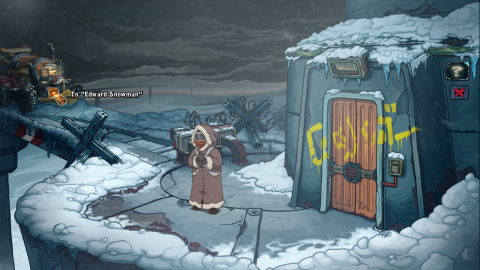 We finally begin proper with a Rufus, still with his ex Toni, waking up and seeing all of the events of the past games and that bad future as a dream. He runs into a scientist named McChronicle, whom has a sort of time machine that can rewind time a bit and tries using it to save Toni’s glass set and keep their relationship afloat. This doesn’t work, however, thanks partly to a mysterious pink elephant, and it’s not long before the two end up hopping through time and both this Rufus and a future Goal try to change their fates. Cue eight hours of things constantly getting worse, and worse, and worse near infinity.

Deponia Doomsday really expands on the mythology of the franchise, even letting players finally explore Elysium, but it also creates a story filled with people with good intentions ruining everything for everyone, including destroying what good the original ending created. It constantly hammers home the moral of the story: Everything must end eventually, and trying to recapture something lost will only disappoint or hurt you eventually. Rufus gets lectured by Toni as every single he does trying to fix things makes it worse, his attempts to reunite with Goal on Elysium create a brand new disaster out of his control, his time traveling shenanigans end up alienating him from Goal, and so on and so forth. Rufus is effectively the avatar of hope by this point, but that doesn’t mean he can make the impossible possible, he can only inspire people to try. This game doesn’t invalidate who he is, but rather examines that further and plainly expresses one of the original trilogy’s most significant themes much more loudly. 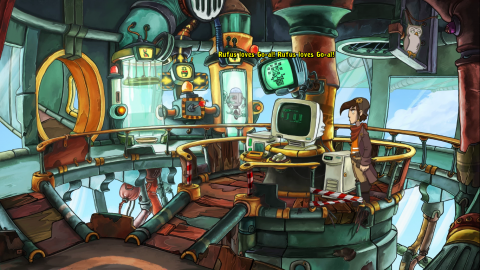 This is the game’s greatest strength. It plays around with expectations built by the original trilogy and constantly throws the established formulas and character dynamics for a loop. We also get to see a significant exploration of why Rufus and Goal connect with each other so much, one aspect of the original trilogy not explored quite enough. Goal and Rufus are similar in how they embrace adventure and try to do what nobody else will let them or believe they can do. It becomes the thing that allows them to truly love each other, but also causes them most of their problems. They’re both unable to accept things as they are, and while that can be a useful quality at times, it becomes self and outwardly destructive here. The game’s ending is only achieved by one of them finally surrendering to the impossible in order to save everything they managed to accomplish together.

The whole game is a story of life, how people find purpose and deal with the ends of things. Relationships, normalcy, life itself, everyone deals with these losses differently. Most everyone understands at some point that things can’t last and make peace, a lesson both Rufus and Goal have to learn the hard way. It’s far more impactful that nearly every big moment from the original trilogy, and the dark humor finally supports the ideas at play instead of feeling out of place. The time traveling kid and his future self in the diner really stand out in this, showing a shared misery between them born from their desires to know what if things had been different. It’s a mean, cynical bit that actually fits well with the game’s main point. The only bits that feel out of place are “Pimpy the Clown” (it’s just as horrible as you’re imagining it) and giving Lotti an origin story. It’s just plain transphobic and leaves a bad taste in one’s mouth. 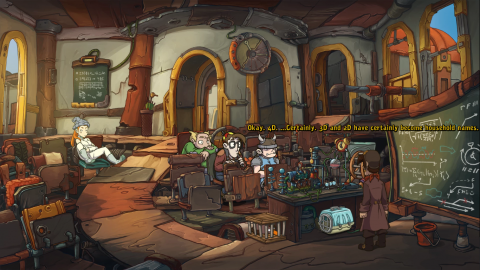 This new time travel formula also has a gameplay benefit by constantly bouncing the story around different locations and areas. You’re never in one area too long, and every area is packed with stuff to do. Elysium really sticks out for some great brain-scratchers built around a time loop scenario, but the paradox zone includes a really fun portal sequence that takes the premise and really runs with it. There are also timed sequences, where you must perform a set of actions in a set amount of time, which actually works well here as failure just restarts a loop. The last one of these is especially clever, having you try and change the future in subtle ways to give an out from a loop.

Despite being a franchise with such a rocky history, it ends on one of the highest notes possible, creating a moment so tragic that it could move some to tears, and it’s earned from the history of a combined four games and all the time spent with Rufus and Goal. Deponia Doomsday is one of those rare sequels that could be considered a masterpiece, and the fact it came from the Deponia series, of all things, makes this all the more unexpected. There are few point and clicks out there that leave such a mark as this game. It’s just a shame you have to play through the poorer parts of the previous games to really appreciate it.