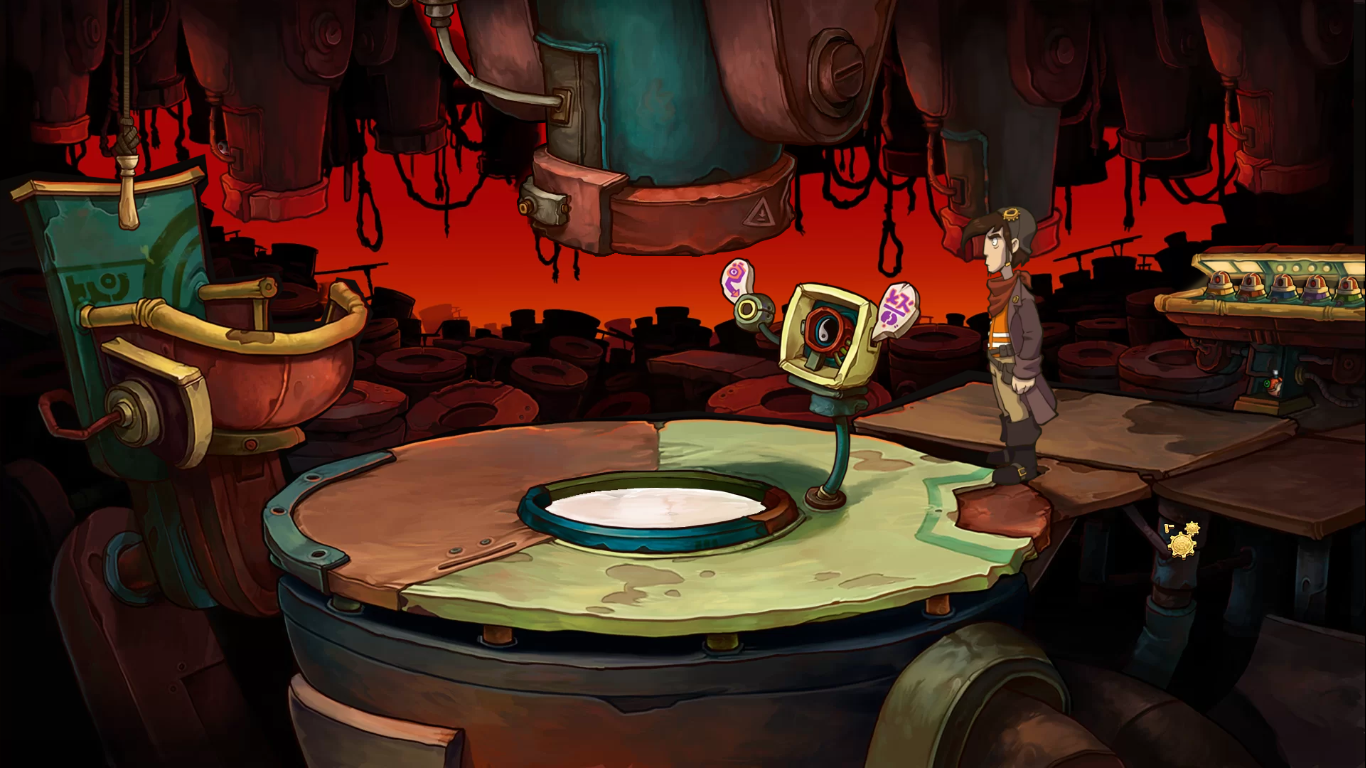 2013’s Goodbye Deponia is as the title suggests. It was meant to be the final game in the series, paying off everything established in the first game and developed in the second. On top of that, it showed the series true point and thematic depth in full, aiming to give the perfect ending to this now fan favorite series. The first few hours of the game really show that promise in full, with some of the series best moments and puzzles, only to stumble before reaching the finish line. 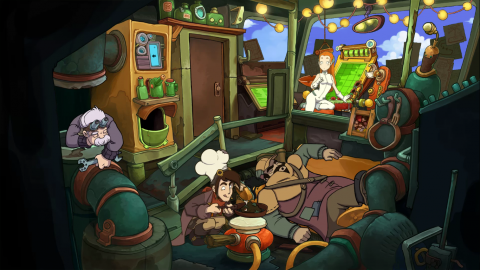 The game starts shortly after Chaos, with Rufus traveling with Doc and Bozo to get Goal somewhere safe to finish her brain surgery. However, Rufus’ terrible idea of changing course for some land fishing results in their junker being torn apart after latching to an Organon cruiser, Goal almost being killed by rampaging machinery, and Rufus being too distracted by trying to appease his biggest fan to do proper logical actions. The four manage to get away, but have to walk to a hotel on the tracks and wrap things up. Eventually, Rufus and Goal get a chance to go to Elysium and finish things once and for all, but the two become aware of the growing plots around them, and Rufus is forced to finally confront who he really is and the consequences of his actions.

Goodbye Deponia‘s first hours are absolutely fantastic. They finally establish who the Organon are and why they do what they do, show that Rufus’ friends are finally at their breaking point with him, have Rufus cross a line through his bumbling idiocy that cost him everything, and drop the mother of all bombshells that finally explain one of the most significant lingering questions that’s been hanging around the series since game one. 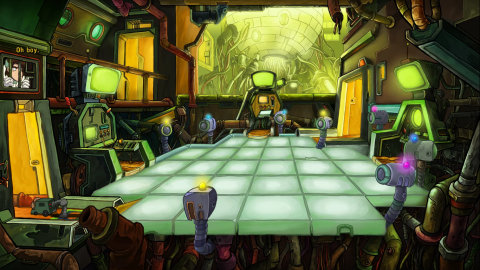 And then the middle segment begins and ruins almost everything before we reach the resistance headquarters and drive towards the fantastic ending. Without giving things away, the middle segment is, by far, the single worst segment of the entire series. The dark humor crosses a few lines that should have never been crossed, including a puzzle where you literally sell two people that ends on an incredibly racist, sexist note in the process. It’s especially baffling due to the game’s themes of finality and redemption, not to mention Rufus’ character arc. It goes on for a long while and mostly acts as build up to the much more interesting stuff in the final act. There are a few solid puzzles in there, like an infiltration bit on an Organon base and convincing a therapist that you’re clinically depressed, but it pails in comparison to the genuinely clever bits at the hotel and the emotionally charged final moments.

One aspect the game excels at, though, is the build towards a climax. There’s a constant feeling of finality, for seeing so many characters trying to deal with the end of the world in their own ways. Some join together to embrace the end, other completely shut down, some fight, and yet more just enjoy their lives as they have been as things are starting to crumble. Some puzzles are even built around playing with how people are handling these world shattering revelations, like trying to snap Bozo out of a shell shocked state, or getting involved in a cult ritual. You’re finally in the shoes of a hero, trying to steer the course of the world, and you have to do something truly selfless to get that good ending. 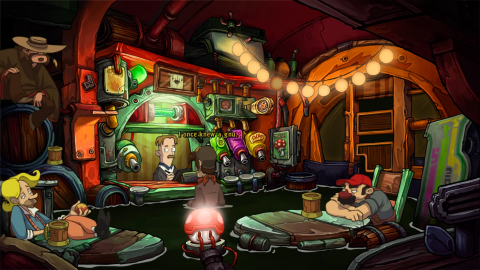 The game significantly redeems many of the middle’s worst faults with the surprisingly subversive revelations and the final moments, perfectly ending Rufus’ and Goal’s story on a satisfying note and with most every subplot and character relationship explored. Unfortunately, that doesn’t negate how the middle segment drags, and it really passes the point of good taste on a near constant basis, even for this series. Maybe that’s fitting for such an uneven series, finishing such a grand tale in such a satisfying and frustrating way.

Fans did not agree. There was much outcry over a few dangling plot threads, and anger that Rufus didn’t get the ending they felt he deserved. The series went dormant for three years, until a new sequel called Deponia Doomsday was announced in late February 2016 …and then released five days later. Odd, right? Well, that’s because Deponia Doomsday was less a sequel and more message to those angry fans.

What resulted may be one of the most brilliant endings to any franchise ever – partly because that ending was about endings.