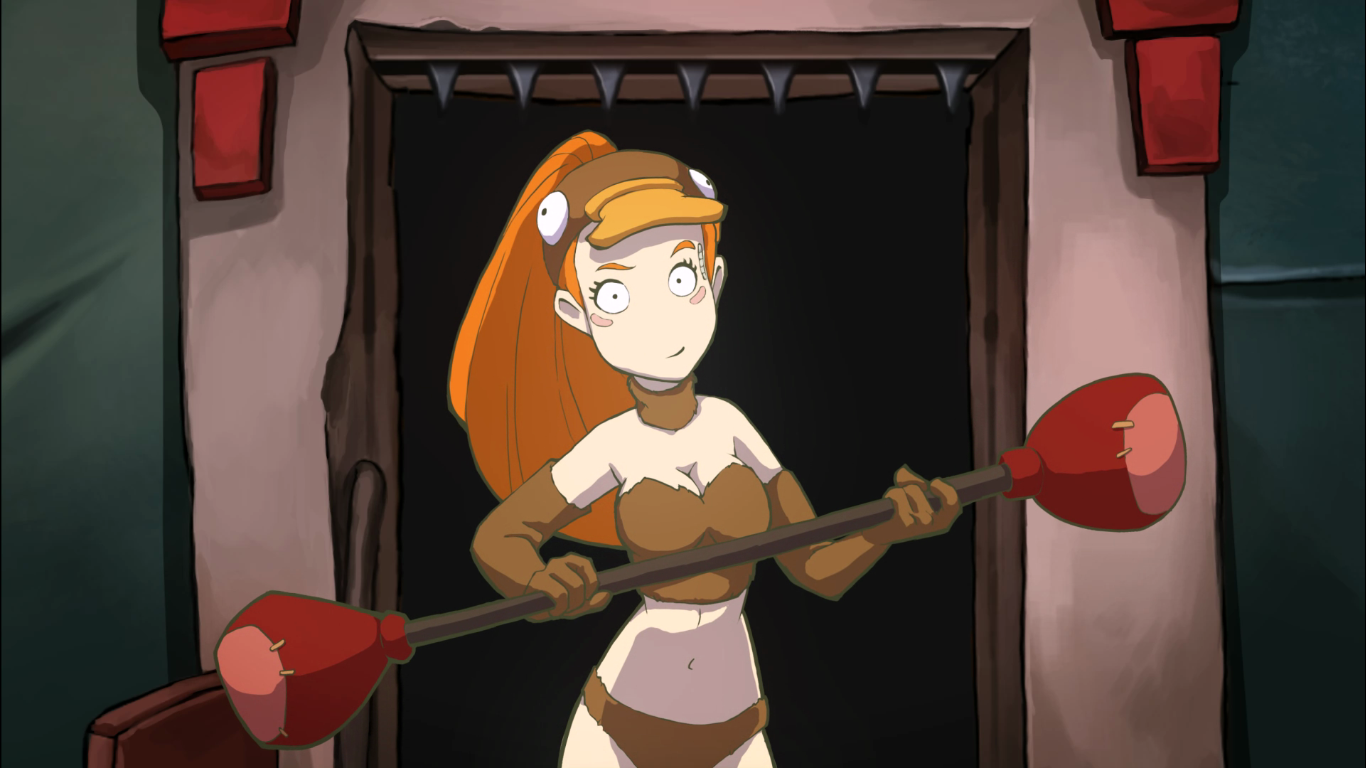 Where the first Deponia felt like a bloated, messy execution to a simple story, Chaos on Deponia feels like a proper adventure. It also, amusingly, subverts the ending of the first game a tad, showing that Rufus has not learned as much as you’d expect. After making a major personal sacrifice and managing to give Goal her memories back in secret to tell Elysium that there is life on Deponia to stop its demolition, Rufus …is right back to trying to get to Elysium. After nearly killing new friend Doc (he saves him, don’t worry) and sling-shotting a rocket mounted buzz saw into Goal and Cletus’ airboat, Rufus damages Goal’s brain implant (AGAIN) and hears from Cletus that they had come to an agreement – but there’s a part of Goal that agrees with him that destroying Deponia is the best course of action. Rufus, Doc, and trash scavenger Bozo go to the floating black market to give Goal brain surgery, but Rufus gets the wrong implant cartridges (they came with a free lollipop!) and Goal’s personality is split into three. Now Rufus needs consent from all of them to restore Goal and get her to Elysium to save Deponia. 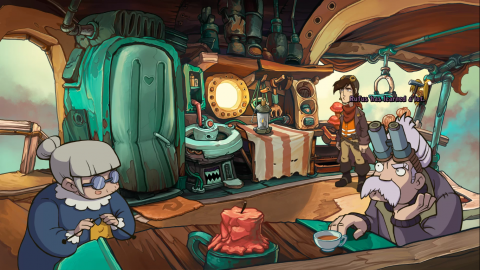 Chaos builds on everything the first game introduced in spades, fixing most every narrative issue. Not enough Goal? Now there’s three of them, each showing radically different aspects of who she is. Not a clear reason for the conflict? We get a bombshell of a reveal that suddenly paints everything in a new light. Rufus gets away with too much? His actions start to catch up with him, and he has to earn the trust of all three Goals. Boring first chapter? The floating black market is divided into multiple factions, each with their own amusing stories that payoff and create major plot turns. Everything feels more alive and interesting, showing us far more of Deponia than the first game ever could. We even get to meet Rufus’ dad, who ends up being radically different than expected and shows us sides of Rufus’ personality we’ve never seen before.

The main personal conflict in this installment is also more engaging than Rufus simply learning not to be a complete dick. This time, his goal is earning the trust of, well, Goal. Despite one good deed done in the last game, all three Goals have reason not to trust Rufus. Lady Goal is upset that Rufus has trapped her on a planet of trash and is disgusted by his slummy manners, Spunky Goal sees him as an idiot wuss not worthy of knowing, and Baby Goal is more interested in people who truly try to do the right thing, no matter the situation. The main puzzles at start are figuring out how to get all three to trust you, and each puzzle has a satisfying end to it, especially Lady Goal’s (the misogynistic elements of that particular path get subverted HARD in a truly impressive way once the next chapter beings). There’s even a surprising moment of possible depth shown in Cletus, who’s been portrayed entirely as a self-centered snob up to this point. We get to see more of everyone, making these characters likable and even engaging in ways the original game’s large cast weren’t. 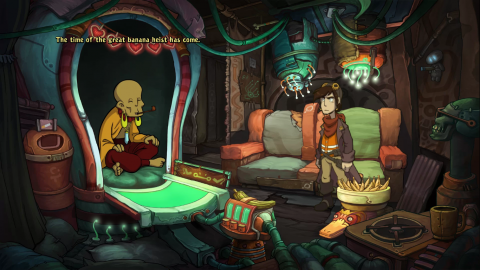 The puzzles are also much more satisfying and numerous this time. There are some clever dialog pieces here, like getting a crime boss with verbal tics into the proper pattern to get her to say what you want, and one truly brilliantly trollish bit revolving around background music. The only clunker is the dolphin minigame, which just comes down to random luck, so make sure you’re playing with minigame skipping if need be. There’s also an issue with the length of the black market segment. While it’s much better paced out than Kuvaq and far more varied, it still goes on a tad too long for its own good. Later areas also feel a bit bare, especially when you arrive at the major city of Deponia, only to hang around the entrance and some areas of the sewers.

Chaos on Deponia serves mainly as a good second act. It gets all the pieces and players where they need to be, explores more sides of them to make them much more engaging, and goes a bit further in establishing themes. The following year, Daedalic wrapped up the trilogy with Goodbye Deponia, aiming to top everything and give a satisfying conclusion to this little saga they had crafted.