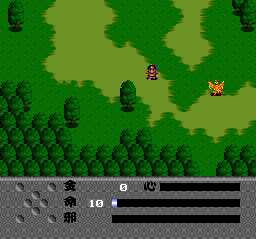 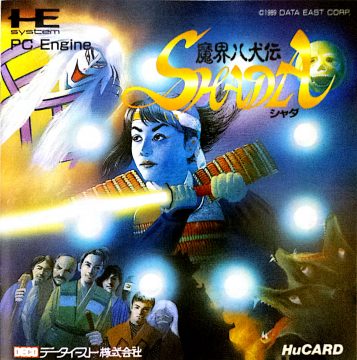 In 1987, Ancient Ys Vanished Omen took the Japanese computer gaming scene by storm. A perfect combination of fast action, a light hearted fantasy RPG setting, and amazing music, an uncountable number of imitators of dubious quality flooded the Japanese gaming market for the next few years. Some of these games were able to match Ys‘ fun music, or maybe add an interesting twist to the controls and level design. In 1989, Data East took a swing at the Ys fence with the release of Makai Hakkenden Shada. The distance they missed that fence by cannot be easily measured.

At a glance, Shada seems fairly harmless, like Aiza and other fun Ys clones, you start out in a town with nothing, buy some weaponry and armor from the shops, the village elder tells you what’s up, and you set off to crash into monsters and save the world. Music is bad but not particularly horrendous. The graphics are interesting. Despite being on the PC Engine, they’re extremely choppy and even the title screen uses a weird dithering like effect instead of just scrolling or fading in. Almost as if this were a PC88 game and not a PC Engine game, like there was a particular game they had in mind. Shada is actually very loosely based on a 19th century Japanese novel, and Data East at least made some colorful character portraits to evoke ancient Japan. However, since the game is based on a novel, and is a clone of Ys right down to the design of the overworld, there is nothing original about this game.

See, Shada isn’t a clone of Ys just in how you fight by crashing into things, but it’s a clone in that entire chunks of the game are almost exactly the same as Ys. It’s a meticulous recreation except for one thing, they were too lazy to even fully rip off the game. The first town and most of the game’s outside world are nearly identical recreations of the same locations from Ys I. However, many of the areas you have to go to fetch items to bring back to town are in the first area. You have to get an item from a giant tree and everything exactly like in Ys! Except instead of trekking across a forest you just head a bit north from the first town. 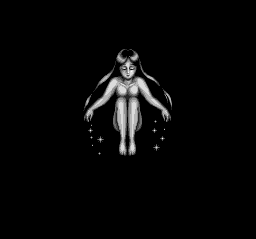 It cannot be reiterated enough how brazen this is, even the game’s title screen imagery is evocative of Ys I. Then after you’re done taking in how you just walked outside of a feudal Japanese cut and paste of Ys I‘s first town, low and behold, an angry bird and a wolf run onto the screen that look exactly like recolored versions of their counter parts in Ys I! Data East was even shameful enough to have a dithering title fade in over a nude goddess character just like Ys I‘s title screen!

There is one thing Shada does that is extremely original though. If you try to leave a given area without having completed all the tasks required there, a character approaches and blocks the path to the next area, informing you of the error of your ways. You then instantly die! Incredible idea, imagine playing like a The Legend of Zelda or Dragon Age game or something where you just spontaneously combust when you talk to someone. Welcome to Makai Hakkenden Shada.