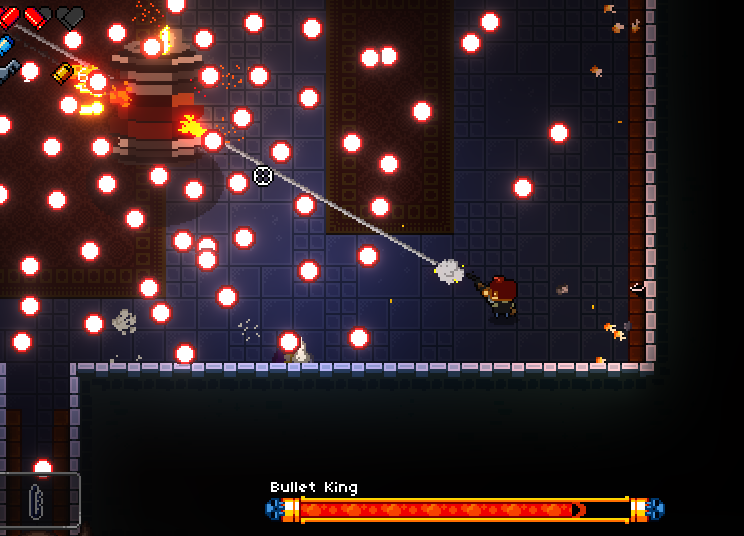 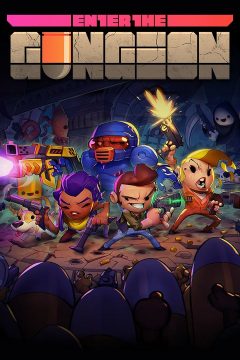 Hey, you got rogue-like in my top down shooter! Hey, you got a top down shooter into my rogue-like! And where did these adorable bullet people come from!? 2016’s Enter the Gungeon might be one of Devolver Digital’s most polished releases, carrying a personality we haven’t really seen in one of their games before – or possibly any game ever. It’s a bizarre mixture of Dungeons & Dragons fantasy, Stephen King’s The Dark Tower, and a variety of sci-fi media, with characters based on the likes of Han Solo and the doom guy. It’s absolutely ridiculous, as you gun down and dodge the shots of living bullet people with cute expressions, along with such imaginative creatures like a beholder – with guns! The 80s-tastic colors and lighting, the biting difficulty, the wonderful sprite work, and the downplayed electronic soundtrack all come together to make a game that takes from so many sources that it becomes something fresh and new.

The premise of Enter the Gungeon is that there exists a fortress that holds a gun that allows the wielder to kill the past itself, but the fortress was decimated by a giant magic bullet from the sky and rebuilt to house the treasure. Our starting playable characters have all gathered here to try and get their hands on the weapon and change their pasts, from saving their friends to getting revenge. However, the Gungeon holds more dangers than anyone could reasonably expect, plus a few others also looking for said gun waiting to be unlocked. 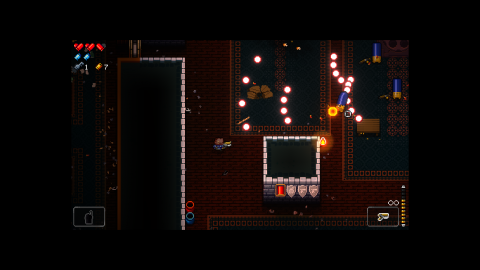 At the start of the game, you simply pick one of the characters at your disposal and start a run through several floors of the dungeon to find the gun that can kill the past. Everyone has different attributes, like the marine starting with armor or the convict getting a brief period of increased damage output after they’ve been hurt, but everything will ultimately come down to what you can find in the dungeon floors and your own skill. You simply go room to room, fighting whatever enemies you come across to unlock the doors and find treasure in chests or as random rewards for clearing a room at odd moments, plus gathering bullet casings to spend at the shop located on every floor. To clear a floor, you must fight one boss from a handful of possible bosses that reside on the floor, then you can continue on, or save and take a break if you need a rest.

If you’re familiar with Smash TV, then you have a solid idea of how the game plays out, though you do get some nifty tricks like flipping tables for cover and the endlessly useful dodge roll. If fact, there’s often so many bullets on screen that the dodge roll will become your most used action in some fights. When used, you leap in a given direction, where you will not take damage as long as you remain in the air, but all bets are off once you land again. This makes the focus of the game movement, with table flipping mostly useful when there’s something coming you know you can’t dodge. You’re always running, and you’re always shooting, and you will die if you stop during the more chaotic shoot outs. 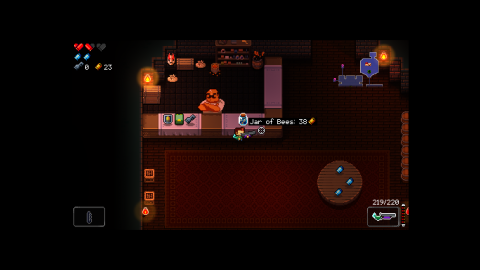 This all makes the game ridiculously challenging, which is why the rogue-like elements benefit the top down shooting so much. Despite a lack of a feeling of progress in what you can unlock, there is a feeling of progress as you learn the patterns of the enemies on each floor and how to handle them. It’s like a quarter muncher, but the difficulty turned down a tad and balanced out with random chance through floor layout, item drops and chests. The one problem with this is that the game has a rough starting period, where a more inexperienced player might spend hours on the first floor alone before having the skill necessary to move to the next. That rough start is a major interest killer, since so little changes in that time. It’s like if a fighting game didn’t just have one arcade mode with a skill gate boss at the end, but a series of them, each with a more difficult boss.

The drops do help, though. There’s a wide range of items and guns, all with their own uses that can completely change how you play. Items offer basic bonuses, sometimes with a catch (like the size of your health bar related to how much money you have on hand), and you can find special items you can use as additional powers in the field. However, most of your experimentation will be with guns, and there’s just shovels full of them, a ton of them absolutely ridiculous. Ant guns, snowball guns, t-shirt canons, a gun that only shoots letters, Mega Man’s buster, a Super Meat Boy gun that throws buzz-saws everywhere, and so on and so forth. Even seemingly useless weapons like water guns have uses, as a wet enemy can be electrocuted, or you can use the stream to spray enemies into pits. You may find something you’ll love in ways you never expected, like a wind-up gun that packs a huge punch early in its charge, or a revolver shotgun with absurdly fast fire. Better yet, everything you find includes descriptions with amusing lore attached, not to mention clues to the back stories of your characters and just what they’re trying to fix. 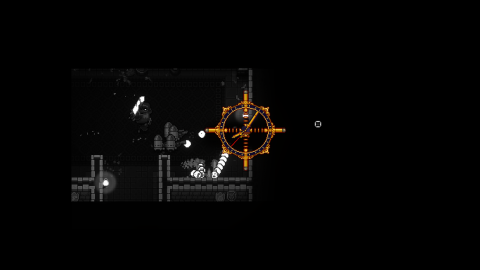 While Crypt of the Necrodancer fails to engage too much after you realize its game, Enter the Gungeon engages on a pure mechanical level that relies less on novelty and more on execution. It plays great, no matter which control scheme you use, and it creates some pulse pounding fights that will keep you on the edge of your seat. If it wasn’t for the rough start, it would be one of Devolver’s best releases, but as it stands, it’s just a damn good time and a creative powerhouse that stands it apart from the sea of rogue-likes out there.