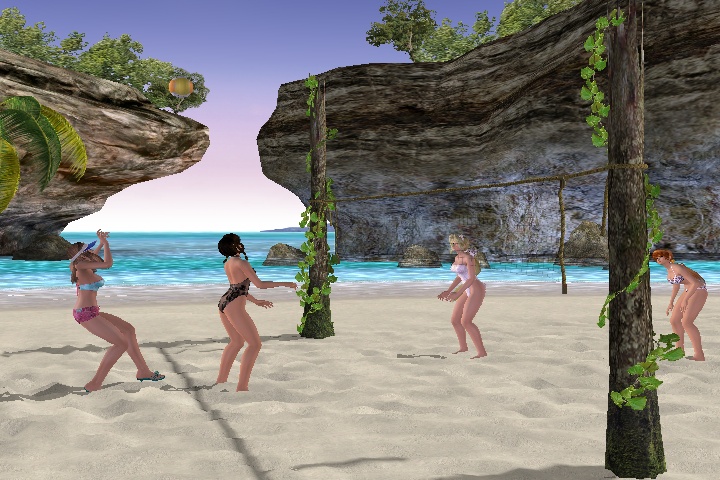 A fan service game if there ever was one, Xtreme Beach Volleyball puts all of the female characters (plus a new one named Lisa) onto a desert island to frolic around in bathing suits and play sports. The cracker-thin premise is that Zack – now voiced by his real life template Dennis Rodman – lures the ladies to a tropical island for a fighting tournament and attempts to woo them.

Calling this a sports title is almost inaccurate, as the game is really 50% volleyball, 50% lesbian simulator. Sure, you do spend a good amount of time hitting the courts, but you have to remember that volleyball requires two people to a team. You’ve got to find a partner amongst the other girls and make her happy by purchasing the right gifts – essentially making this a modified dating sim. You never really need to play volleyball, really – it’s just a way to get cash so you can buy any of the hundreds of items, ranging from swimsuits to accessories like hats, sunglasses and even nail polish. In effect, all you do is really play dress up with the Dead or Alive girls and watch them smack a ball around for a few minutes. And if you don’t want to do that, you can literally just spy on them as they play like little girls on swingsets, frolic in the water, straddle trees and do stretching exercises. Creepy? Yeah, a little. But it’s all pretty tame compared to some of the weirder stuff that’s come out in Japan.

The volleyball portion is only barely more evolved than, say, Pong. You can either whack the ball over the net or pass it to your partner, at two varying strength levels triggered by the Xbox’ pressure-sensitive buttons. You don’t even really need to position yourself much, as the game practically does that for you. You won’t find much in the way of strategy, but it’s simplicity helps make it an amusing distraction. 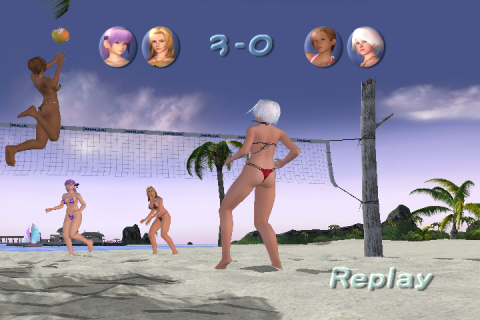 You could probably say that for the whole game. There’s very little in the way of deep gameplay, challenge or even satisfaction (unless you’re one of those obsessive types that absolutely needs to have every swimsuit on every woman in the game, although you can also unlock some cool promo videos from the other Dead or Alive games), but it’s actually a good relaxation game, the kind where you can just set your mind on autopilot, put on your favorite song (use the custom playlist, the default licensed songs are mostly garbage) and just bum around.

Despite the fact that Xtreme Beach Volleyball is rated M for all of the skin-baring attire, it’s really no worse than the swimsuit issue of Sports Illustrated. And only the intro features any of the purported nudity that the back label promises. However, a bunch of hackers took it upon themselves to strip their favorite ladies and have them play around buck nekkid. Naturally, this requires a modified Xbox. Of course, Tecmo frowns upon this immensely – that big, long diatribe about copyright law and infringement in the intro was probably exactly to prevent people from doing stuff like this, especially considering some people in Japan got sued for creating a nude hack for Kasumi in Dead or Alive 3 – but it’s an amusing testament to how far some people would go to see naked video game women.

DOA Xtreme Beach Volleyball also contains the most ridiculous intro videos known in existence. The first features the various girls playing around on the beach, including the infamous bit of Lei Fang feeding Hitomi a strawberry before she playfully bites on her finger. The other intro details how Zach got the island, which includes but is not limited to: (1) a Titanic parody, (2) a jetpack, and (3) a dance number in a casino. When you finish your vacation on the island, Zach gets eaten by a giant shark for some reason. Help! This game makes no sense! 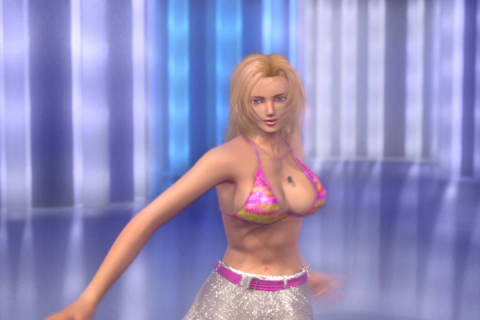 Kitty on Your Lap
Night mode