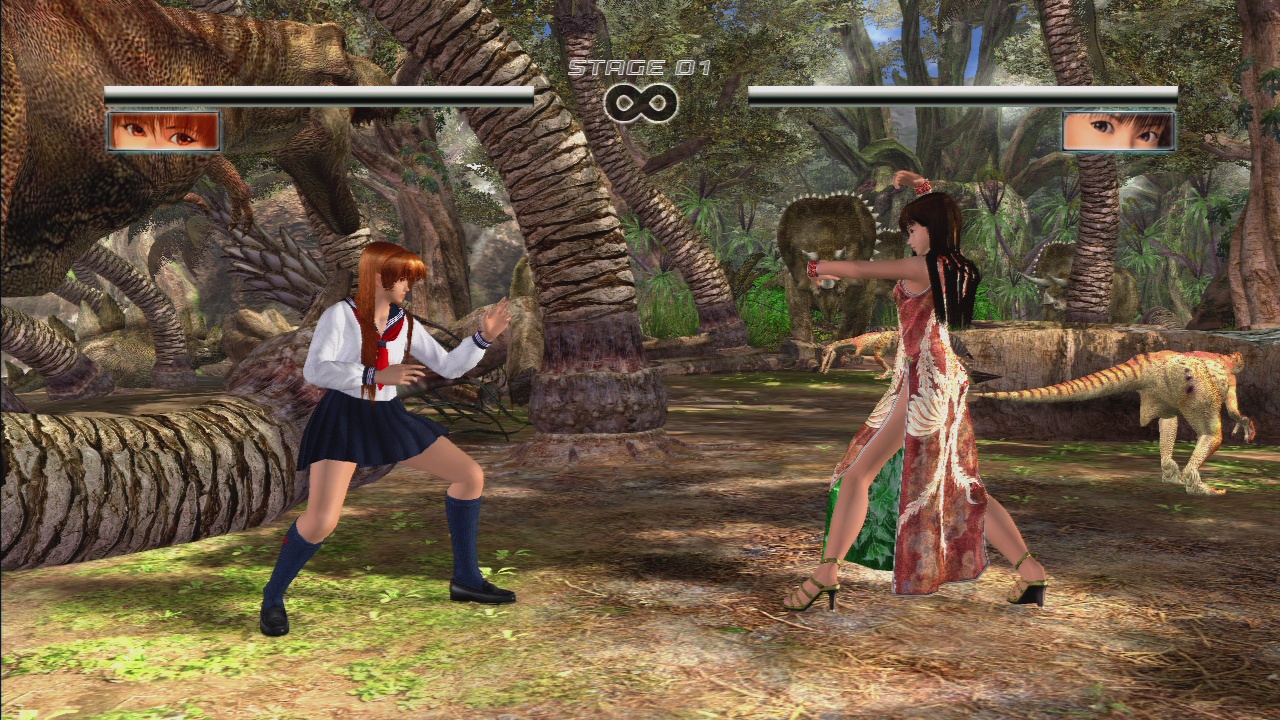 One of the first titles for the Xbox 360, Dead or Alive 4 is an odd choice to show off the power of the new system. Sure, it looks great, especially in high-def, but the improvements over Dead or Alive Ultimate for the original Xbox are fairly minor. Some of the new environments are pretty cool, especially the Vegas stage (where characters can get hit by cars if they dawdle in the middle of the street) or the dinosaur (!!) level, which features huge, animated raptors, pterodactyls and a tyrannosaur. 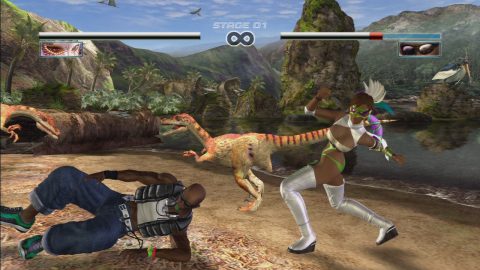 As usual, there are a few new characters – young pretty boy Eliot, who seems to be taking over for Gen Fu; Kokoro, whose enormous hair and flowing kimonos show off the new cloth physics; and La Mariposa, a masked wrestler who is not identified in the game, but obviously Lisa from Dead or Alive Xtreme. Most interesting is Nicole, a female version of the Spartan from Halo in full armor. Fans of that series will welcome her, while others may find her slightly misplaced. Sadly, none of these characters are as refreshing as Dead or Alive 3‘s newcomers in how they are played. Some of the veteran characters first appear to be missing from the roster, but they can all be unlocked.

The fighting engine is pretty much the same, but controls are a bit more rigid, for better or worse. While the game runs faster than previous titles, the physics feel a tiny bit more sluggish at the same time. Team Ninja has also mucked with the counter system a bit to make them harder to pull off – to counter mid-height kicks, you need to press forward together with the hold button instead of back. It’s a completely arbitrary separation that never quite feels right, and the system still feels pretty cheap. The uber-powerful final boss this time is Alpha-152, a translucent, flying, naked clone of Kasumi who can wreck you something fierce. Overall Dead or Alive 4 drastically cranks up the difficulty for the single player modes. While none of the former games was particularly hard even at the highest settings, Team Ninja obviously wanted to cater to their new reputation as hardcore game developers they’ve earned from Ninja Gaiden. The normal setting is at about the same level as “very hard” was before – and you won’t even find an “easy” option. 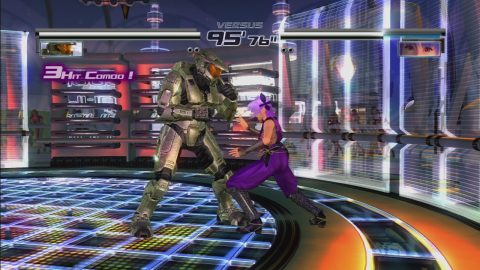 While there’s a noticeable lack of cool costumes – a few more than Dead or Alive 3 but still far less than Dead or Alive Ultimate – each character has a unique full motion video ending. They range from boring to absolutely hilarious – Zack and his girlfriend face off against an army of skeletons, Lei Fang kicks some random guy off a train for accidentally groping her chest, Tina puts on a rock concert and uses an entire city block as her own personal amp, and Kasumi has a goofy (naked!) mermaid dream. Once again, the opening song is the not-so-brilliant Aerosmith song “Eat the Rich”, and the rest of the soundtrack is fairly forgettable.

The Xbox Live features are mostly the same as for Dead or Alive Ultimate, although there’s now a “lobby” where you can purchase cute little avatars. Character customization a la Xtreme Beach Volleyball would’ve been nice though – if Soul Calibur 3 has it, why not here, in a series that always put a lot of emphasis on the character’s outfits? Overall, Dead or Alive 4 is a decent installment, even if it refuses to fix the balance flaws that the series continues to be maligned for.