Released seven years after the last proper main episode, it’s of no surprise that Dead or Alive 5 marks the biggest jump in the series since Dead or Alive 2. Even though it was also the first numbered entry to run on the same hardware as its predecessor (with the novelty of going multiplatform), Team Ninja completely redid the game’s engine and introduced a new style for the character design. In place of the still vaguely anime-inspired doe-eyed plastic dolls now stand much more realistic models. This not only applies to the characters’ static appearance – characters now start sweating during the fight, and when they fall on the ground they get visibly wet and dirty. There are still no bruises or other injuries, though, so it’s not quite up to the standard of more serious fighting sports simulations yet.

The gameplay, on the other hand, doesn’t exactly follow this shift to more realism. If anything, it feels even a bit more floaty and juggle-heavy than the previous games. Dead or Alive 5 plays astonishingly conservatively, with all the same basic mechanics known from previous games. Most are in line with the way they worked in Dead or Alive 4again, after Dimensions reintroduced several elements from earlier games. Characters got the usual tweaks in their movesets, but the feel is still very much Dead or Alive like it used to be, regardless of a few new systems.

The most obvious addition to the fighting system are Power Blows, Team Ninja’s concession to desperation attacks like Street Fighter IV‘s Ultra Combos. They can only be performed once per round, and only after the character’s health is below 50%, but result in an impressive combo with slow motion effects and a lot of damage. The input for these moves is simple, but they all take an extraordinary long time to charge up, so it’s still difficult to land them against a reasonably skilled opponent. 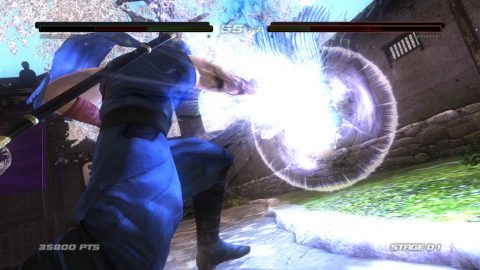 Power Blows are no Mortal Kombat material, but fairly dramatic for Dead or Alive standards.

Also new is the way the Critical Stun system works, but it is a much subtler change than the Power Blows. Critical Stuns are caused by specific moves, and can then be linked into Critical Combos and Critical Bursts to render the opponent unable to counter with a Hold for a brief moment, enabling a surefire combo opportunity. Incorporating any of this into actual play effectively requires a frame-counting level of professionalism, though.

At least there are proper teaching materials for the subtler, less intuitive aspects of the fighting system this time. The tutorials for the new (and old) mechanics are meticulous to a fault, and while some hand-holding in a fighting game is nice for a change, the tutorial’s compulsion to explain and make you practice every little variation can get boring quickly. Fortunately, it allows selecting any step separately.

People still get knocked over the edge of the arenas onto lower levels frequently, but now they don’t just have to fall down without defense. Well, not always, anyway. Sometimes a Cliffhanger is initiated, where they hold on to the ledge and try to intercept the attack of their opponent, who runs at them to smash them down: A block defends against a blow, and a throw against a throw. The winner of that confrontation suffers significantly less damage from the fall. Unfortunately, this only ever happens in specific stages and in very specific situations, so it’s possible to play for hours without ever seeing a Cliffhanger in action. 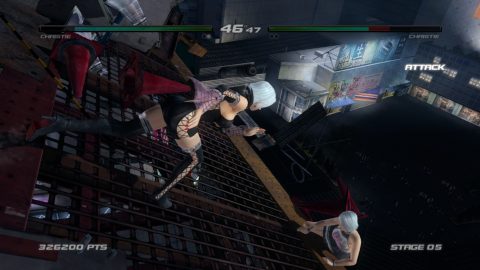 The stages have overall gotten even more eventful than before. Fights now occur in a circus full of tigers, which are just waiting to jump through flaming hoops and knock the combatants over as they run across the arena, or a warzone full of tanks where shots are fired constantly. Several stages now have opportunities to cause major carnage, most impressively the construction platform high over a metropolis, where a large stack of steel girders can be loosened by the fighting, before another blow sends them plummeting down to street level, where they cause mass car crashes and explosions as the fight is continued on the ground. A Chinese home seems tiny at first, but shows more facets as the combatants keep punching each other through the porous walls. Of course, there are also a few more conservative fighting rings. Only the fight in a train that’s teased in one story scene does never happen, unfortunately.

Dead or Alive 5‘s story mode follows the template introduced in Dimensions, so you once again get to fight a set of encounters with fixed characters. The game doesn’t have much of a story to tell, but story mode is extraordinarily long. This means the usual generic story about the next Dead or Alive tournament – which of course serves once again as the front for several sinister schemes involving yet more clones of Kasumi – is padded out with countless inane scenes that mean nothing at all and feel like one grotesquely long Dead or Alive 4 ending. Zack runs around personally inviting everyone to the Dead or Alive tournament, Bass gets to beat up newcomer Rig for being dismissive about his motorcycle, Lei Fang is seen awkwardly stalking Jann Lee, Brad and Eliot, who are apparently roomies now, fight for the last rice dumpling, and so on. Many scenes are shown several times in different characters’ chapters, as if the story needed any repetition to get boring. To the game’s credit, though, it knows to embrace the inherent silliness of its ludicrous plot, and the writing is so consistently awkward it’s hard to even notice when it switches to the supposedly serious scenes. It’s just a little bit too verbose for its own good. 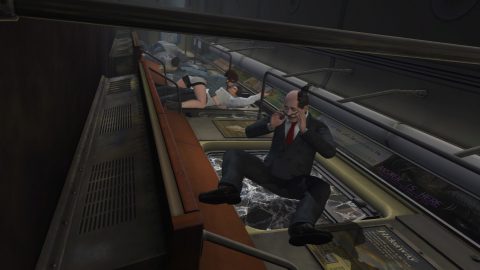 Most awkward train crash ever.

The original release of Dead or Alive 5 brings five more characters to the table, but only two of them are completely new. Mixed martial artist Mila (totally not Mila Jovovich) and Taekwondo fighter Rig bring interesting new playing styles to the series, while the true attraction are the characters borrowed from Virtua Fighter. Apparently Sega is done with their once prestigious fighting game series, so they allowed Team Ninja to use its most iconic characters. Akira Yuki, Sarah Bryant, Pai Chan work surprisingly seamless in the Dead or Alive framework, probably because the series’ core gameplay is so similar to begin with. Of course changes had to be made here and there, not least the addition of the DOA standard Hold counters, but all their main trademark moves are still there. On the downside, Team Ninja played it as conservatively as possible when choosing the characters (adapting Taka-Arashi, Lei-Fei or Goh Hinogami would have been so much braver), but they still play sufficiently different from their would-be Dead or Alive counterparts.

Dead or Alive 5+, released for PlayStation Vita, but all it adds are touch control and a first-person mode when holding the device vertically. Needless to say, none of these additions is particularly practical.

A year after the original, Tecmo Koei released Dead or Alive 5 Ultimate, which brings back a few of the cast members that were missing in the vanilla version (Ein, Leon), invites another Virtua Fighter character with Jacky Bryant and also deepens the crossover to Ninja Gaiden with Momiji and Rachel, who are rather disappointing additions without much of their own flavor.

In 2014, three more characters were offered as DLC, but only Marie Rose with her Systema fighting style offers truly new variety. Phase 4 is just another Kasumi clone with a few different moves (mostly teleports), whereas Nyotengu looks quite different from the regular Tengu (who is missing from Dead or Alive 5) while playing almost the same.

The update also introduces a bunch of new stages, most of them callbacks to Dead or Alive, like the Lorelei (including a modified Halloween version), the autumn forest and the mountaintop of the Lost World. In the Ninja Gaiden Sigma 2 memorial stage Sky City Tokyo, the huge statue boss from that game rises up to tear off the ring fence, and grabs combatants who get tossed towards it with enough force. Not much happens on the new aircraft carrier because everything is behind an electrical fence, but at least the planes look good.

There were two more variations of Ultimate: an arcade version (for the first time in more than a decade), and a so-called “Core Fighters” edition. This simply turns the game into a free-to-play model where only Kasumi, Ayane, Hayabusa and Hayate are playable from the get go, with everyone else available as paid DLC.

But neither version of Dead or Alive 5 Ultimate was all that ultimate after all: Early in 2015, Dead or Alive 5 Last Round further expanded the game with a playable cyborg version of Raidou, the boss of the first game, and fighting style mashup character Honoka. Tecmo Koei also embarrassed themselves with another shameless marketing campaign focusing on the new “Soft Engine” for the next gen console versions, which supposedly allows for even more life-like animation of soft bodies. Tecmo Koei being Tecmo Koei, it’s an easy guess what kind of soft bodies the advertisement focused on. Last Round also brings back two more stages from Dead or Alive 2, the Crimson and the Danger Zone. These are also exclusive to Xbox One and PlayStation 4, probably for the sole reason that the “next gen” feature list was looking too slim otherwise. 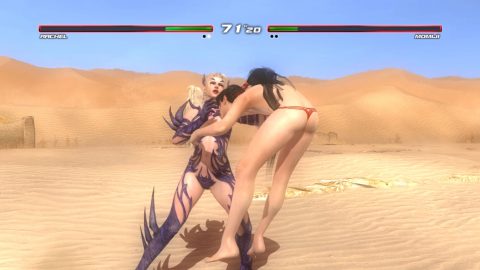 The cheesecake factor is through the roof as usual, with or without DLC.

Another embarrassment is the PC version, which is based on the Xbox 360 / PlayStation 3 branch and lacks most of the “next gen” additions. At the time of this writing, Team Ninja also hasn’t managed to implement the online functions on PC yet. In fact, this version went entirely free-to-play as of 2016.

Dead or Alive 5 is ridiculously big on DLC. The initial release has a fairly usual selection of costumes for the series in more recent history, but there are literally hundreds of costumes available via DLC. There are Tecmo Bowl uniforms, Santa costumes, Halloween costumes, loads of swimsuits for the ladies, and much, much more. Tecmo Koei pursues a “no nude mods” policy for the PC version, but some of the costume choices almost seem more indecent than nudity. The sheer amount of it seems ridiculous compared to normal game prices: Even with Last Round, which includes a large chunk of previous DLC costumes in the basic package, there is still $300 worth of DLC costumes available. When looking at it objectively, no other title in the series had ever even nearly as many costumes, but it still feels scammy.