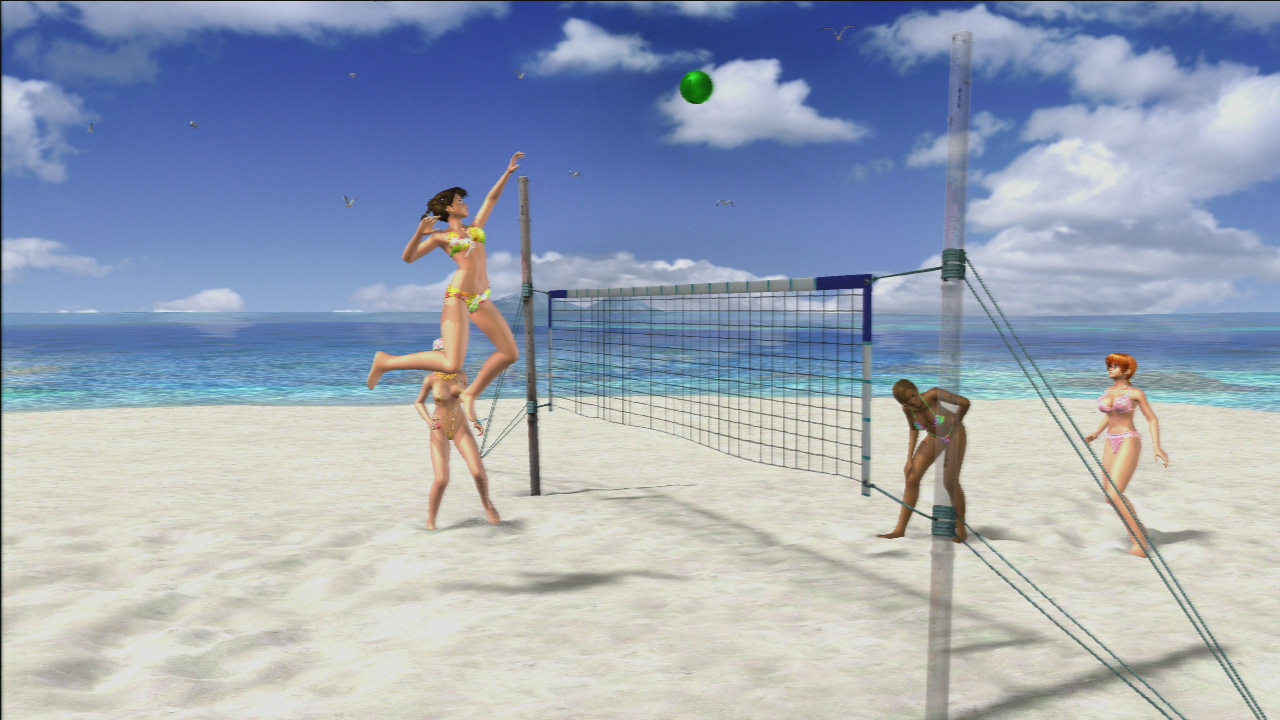 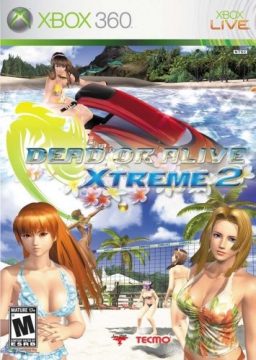 Xtreme Beach Volleyball was a decently entertaining piece of software and certainly got the vacation feeling right, but at the same time it suffered from very shallow gameplay and various problems that left much to be desired. So the announcement of DOA Extreme 2, immediately brought to mind a ton of changes that could make this mediocre but atmospheric game into a good one, and when Waverace styled jetski races were thrown into the package, that almost made waiting for the sequel seem exciting. But when the game was released, most of these hopes would be squashed, but let’s start at the beginning…

Starting from the intro, you’ll discover at once that the blatant voyeurism was even raised – exponentially. Almost the whole FMV consists of embarassing perspectives and shows very clearly that Team Ninja had made some “adjustments” to the women’s body proportions, most closely resembling the very first Dead or Alive game in this respect. They even grub out an even fancier version of extreme, “improved” juggle physics – breasts are now animated independently of each other – which make you think their busts contain a higher percentage of liquid than the ocean water. It’s also kinda cheap that they recycled the same old title song from its predecessor, like many other songs that where already annoying the first time – so once again it is highly recommended to replace them with your own favourite music. 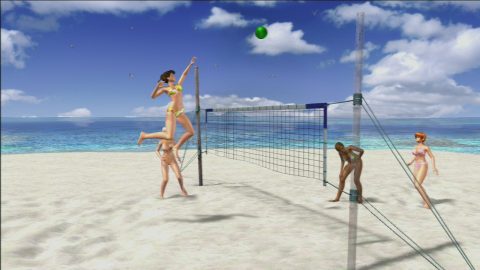 What’s the story, you ask? No! Don’t ask! If you had bet that Xtreme Beach Volleyball was as ridiculous as a video game story could get, you’ve now lost your money. After his island was destroyed by an active volcano, Zack seeks out his sunken property with a submarine and rises it above sea level again using the “you-know-what”. It shoots a rocket into space, which calls an UFO to project Zack’s face upon the earth’s surface and send a tractor beam, perfectly restoring the island. Of course, to prevent the volcano from destroying it again, it has to be closed off by tying a huge rock onto its crater. What!?

The Volleyball game certainly could have used some deeper mechanics, but it is exactly the same. Actually, it’s worse, because the partner AI is actually dumber than before, and most of the time your partner won’t even try to catch the ball coming from your opponents. The casino makes its return, as well as pool hopping, which can now be played competitively. But there’s also a bunch of new mini games, namely tug-of-war, a water slide, a footrace, and the utterly ridiculous butt-battle. Most of these feel quite random, though and are hardly worth using the Zack dollars it costs to unlock them. 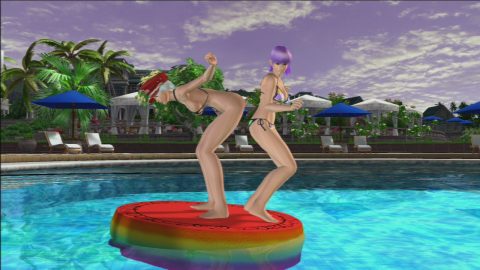 But the addition everyone has been waiting for is the jetski race, anyway. This one actually plays quite well, except turning around after you end up facing the wrong direction is a major pain in the ass. It features a stunt system, which certainly isn’t as elaborate as Waverace 64, but it does its part to make the races entertaining. You can buy various jetskis with different stats, and if you play the race multiple times during a vacation, you get to play on different courses. It’s still not a super great game, but by far the best part of the whole package. Well, the best gameplay part, anyway. The water looks like jelly, though. 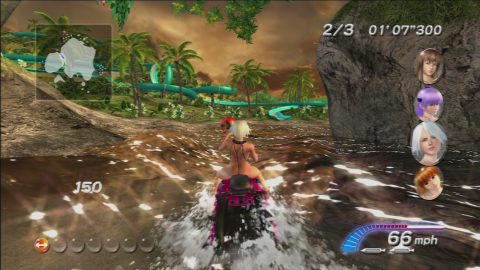 Other than that, it’s the same formula as the first game. You earn money playing the various mini games, use it to buy new swimming suits or gifts for your partners, and try to gift them your character’s suits, since once again, buying suits is restricted to a small fraction of the whole lot for each character. Getting the girls to accept the more expensive ones is still as random, annoying and tiresome. If the game really excels at anything, then it’s wasting your time. Not only do you have gift them again and again, you’ll also spend half the while waiting for the excruciatingly slow text to scroll or new screens to load. At least now you can try to give them the same swimsuit again and again as long as they don’t open the package, and don’t need to buy it anew each time. Speaking of buying, the only DLC for the game are packs to buy parts of the item collection with MS points, and buying all of it this way amounts to ludicrous sums of cash. Thank you Tecmo, for giving us the choice whether we prefer to get ripped off for time or for money. 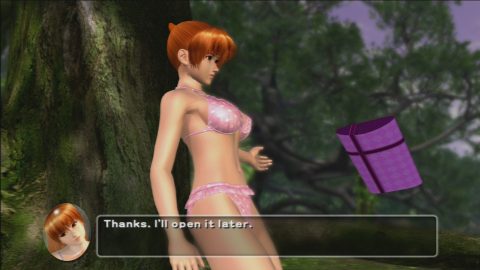 It seems the only aspect a lot of effort was put into improving was the voyeurism. While the scenes in the first game were restricted to specific perspectives, you now have much more free control over the camera, and you actually get a camera to take snapshots of the girls relaxing or being friendly to each other, and then a better one with different zoom functions and color modes. Also, there are a lot more revealing swimsuits, and the women get suntan lines when changing them. The graphics have improved about as much over the first game as Dead or Alive 4 has improved over Dead or Alive 3, but the characters somehow look like they have a greasy oil film on their skin all the time. In addition to watching them sit around the jungle and straddle trees, you can even watch (and photograph) them dance at a stripper pole. Classy!

Despite the fun jetski racing, it’s difficult to recommend the game even over DOA Xtreme 1, unless you’re really into CGI voyeurism. But still, the newer game is also great to just throw it in and have some vacation feeling while carelessly pressing a few controller buttons and listening to your favourite music. If you’re open to that kind of entertainment, give it a try, but don’t spend a lot of money on it.

The most refined aspect of the game is the camera creep mode, possibly a result of Itagaki being a photographer himself. There are two models, and the more expensive one is capable of most functions you’d expect from a professional real camera. It even has black-and-white and sepia filters. Other than the first Xtreme game, where the view was shielding the women from overly indecent perspectives, you’ve got free reign over the camera placement now, and the below examples are far from being the most naughty possible results.