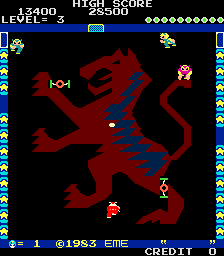 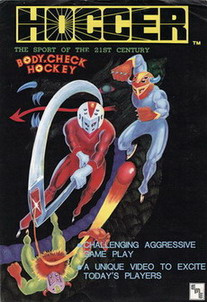 It was hard to accurately replicate sports games in the early eighties. For a game as simple as table tennis, Pong was a fantastic facsimile of the real thing even if it was also much simpler. If anything, it was probably fun because it was simpler without having to worry about trajectory or hitting outside of the court. The more interesting sports-based games of yesteryear did something crazy or unique rather than trying to replicate realism, almost to the point of barely feeling like sports at all. Take Hoccer (a fusion of “hockey” and “soccer”) as an example of a so-called sports game that, when you get right down to playing it, feels more like a sports-themed action game than anything else. While billed on the flyer as “The Sport of the 21st Century,” it’s really more a fast-paced actioner where the goal is to murder everyone.

You play as Andrew, called “the one man team” in the attract demo, and your skills are what will guide Andrew to victory in the Hoccer league circuit against teams consisting of multiple players. The premise seems a bit one-sided, but it might be a pain to control multiple players at once when the premise of the game is quite simple at base. All Andrew needs to do is kill the entire opposing team by slamming them into the walls, but the game downplays the violence factor by proclaiming that the enemies (which are goofily named “Ord” and “Clee”) are, in fact, robots. These mechanical marauders are fought on a single-screen arena with their team insignia on the floor, with the teams respectively known as the Hawks, the Tigers, and the Dragon. You need to fight all three teams for two matches each, making for a total of six rounds before you win the championship. There are three potential cups you can win: Bronze for minor league, silver for major league, and gold for all-stars, each one more vicious than the last. 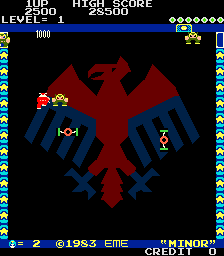 With some sort of stick/shield thingy, Andrew must push the robots into the sides of the arena to destroy them. Pips in the upper-right corner of the screen indicate how many enemies are left, and the match is won once all pips are gone. Andrew can also push them into any of the targets in the middle of the field, but the robots can likewise grab him and toss him into a wall or target. There’s also a puck which he can push into enemies to obliterate them on the spot, and shooting the puck through a target causes the stars on the sides of the arena to increase in point value. Hitting these stars normally garners 100 points, but they can give you from 200 to 1000 points if you keep bouncing the puck off of them while flashing. If you manage to wipe the sidelines completely clean of stars, not only does the stage end early, but you also get a bonus life.

Arguably more important than the targets and stars is the moving goal net at the top of the screen. Hitting the puck into this goal bags you 1000 points and, more importantly, freezes every enemy for about five seconds. No explanation is given as to why this happens, but perhaps the wildly flailing goal exudes some sort of circuit-scrambling pulse to immobilize the robots. Whatever the case, while this is happening, you can easily smash about two to four of them while they’re stuck. While the puck is a good thing to have around, it’s not totally necessary for victory, and it can be occasionally fatal. The normal robots named “Ord” can only pick up and throw you, but the more advanced “Clee” robots can also grab the puck and toss it with a purple fire trail that can kill Andrew if it hits him anywhere but his shield thingy. Thanks to the magic of friendly fire, a thrown puck can also vaporize enemies, but just be careful if it goes hurtling towards your side. 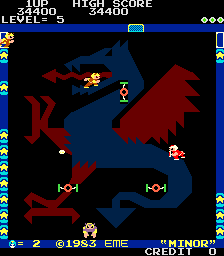 That’s Hoccer‘s basic structure, but like any sport with hundreds of rules, you only really need to know the bottom line of “destroy everyone/thing.” This goal is quite manageable for the bronze, but silver and gold obviously require more of an effort to achieve. Minor league only has you dealing with three enemies at a time, and one push to them is always strong enough to smash them against the wall. Major league ups the ante with four opponents, and they don’t budge as easily when pushed. You’ll have to be reasonably close to a wall or target to terminate the robots on the tougher circuits. All-star graciously doesn’t boost their momentum, but you do have to deal with five at once. Even the first game against the Hawks breaks down into a mobscene almost instantaneously, but that’s expected for a violent future sport. Hoccer may not be anything revolutionary by past or present standards, but it’s still a fun and mostly overlooked game that’s worth a check for the premise alone. Maybe it could become a future sport in twenty or so years, like a fusion of Rollerball and The Running Man. Until the never-happening gritty Hoccer 3000 reboot where Andrew (as played by Jason Statham) fights against evil robots resembling T-800 exoskeletons with a lot more spikes and the ability to breathe fire, Hoccer will just have to settle as an obscure arcade smash-em-up.