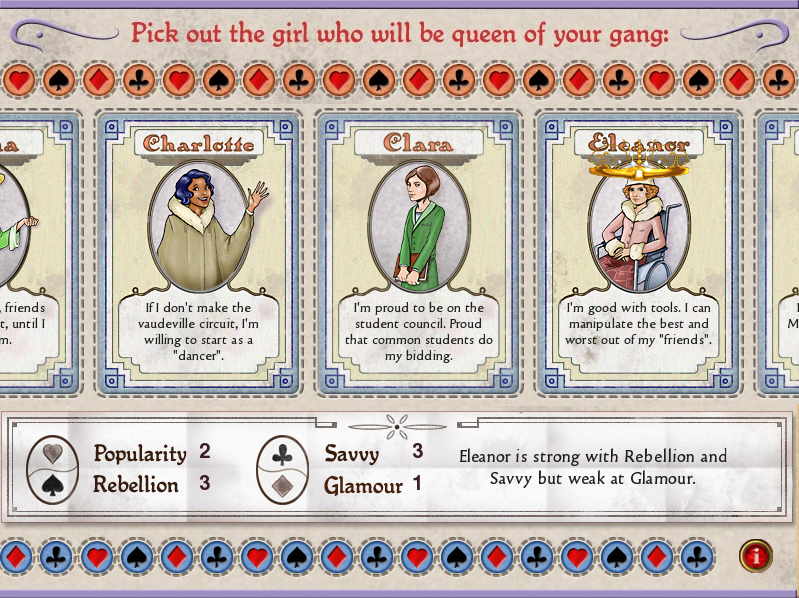 Dangerous High School Girls in Trouble is a sort of RPG/board game/minigame collection hybrid. It’s hard to really nail down what it is because it’s so unorthodox. You start out by picking from one of several girls going to Brighton High School, and your girl decides to make a gang for the heck of it. From there, the girls decide to investigate a series of injuries occurring around the school, a decision that eventually steamrolls into learning the dark secrets of Brighton itself and figuring out their place in a world that can’t stand their sense of independence and freedom. This is shortly after the first world war, so gender relations are still very much on the rocks, and as are expectations for what women can do with their lives. 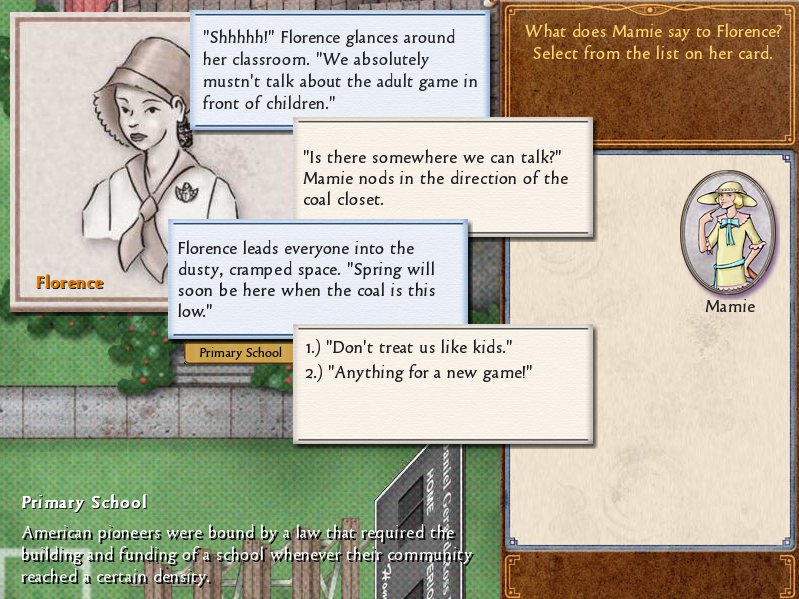 The story is absolutely nuts, but in a good way. It starts out with just four high school girls deciding to do fuck all because they felt like it, then slowly grows over the span of fifteen hours. First, it’s investigating mysterious attacks. Next, it’s helping an innocent man escape hanging. Then it’s taking down a corrupt new police force, and eventually taking down two different conspiracies intertwined that have been causing suffering for the entire town for ages now. Oh, and there’s also ghosts roaming around, and the police are lead by a living magical desk. Did I mention the ugly pony that can only talk when it feels pain? Or that you help said pony run for mayor at one point? The game takes itself seriously and tackles heavy subject matter, but it makes sure there’s plenty of fun absurdity to balance it out. I mean, the sanitation patrol speaks with the dialect of Ralph the security guard from Animaniacs. It’s not without levity.

The gameplay is divided into two parts. The first is the town map, where you can visit four different areas and take part in events at different silver markers on said map. Sometimes during these events, you’ll be challenges to one of four games, based on different statistics you can build over time (popularity, savvy, rebellion, and glamour). Said games are a duel of taunts, fibbing via a faux poker game, exposing secrets through guessing proper words in a character’s thought, and a gambling game that requires a lot of forethought that can even benefit the player with lower collective stats. Beating them grows your characters experience, and they can eventually gain another stat point after winning enough games without being run off from a loss. Your main character, the gang queen, can also have her friends take the fall for her if she loses, so letting friends do the challenges for experience is the overall better strategy. On top of these games, you can also flirt with boys through a flirting minigame. Winning these nets a boyfriend for one of the girls, and they take the hit when you lose an important minigame. 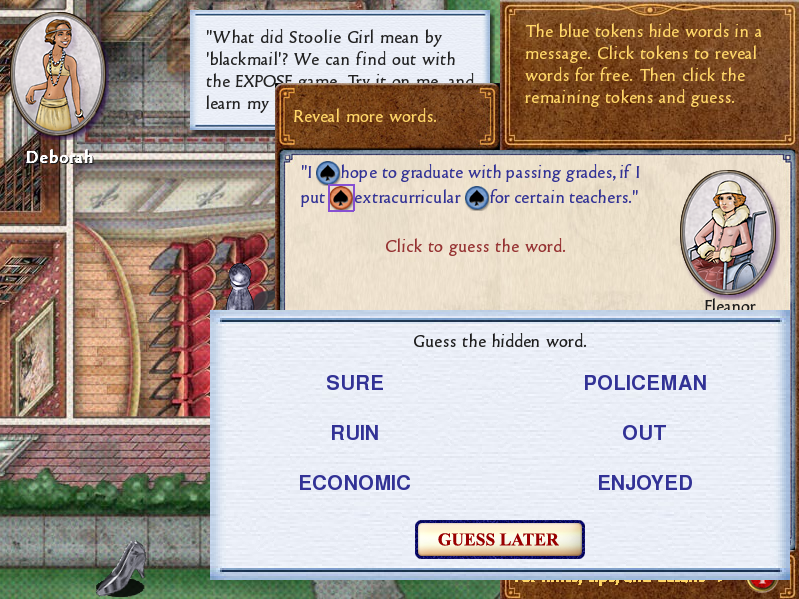 The flirting game is annoying, as it’s based entirely around figuring out patterns and crossing your fingers that you have enough stats to make the catch, but the other four work fine. Fibbing and expose are my personal favorites and the easiest to perform, while the taunting game grows overtime. You’ll learn new taunts and counter taunts overtime by playing with more and more characters, and a lot of those taunts are really damn funny. It hits a bit of a fall during a section where you have to beat the mayor in a taunting game three times in a row, but it’s only annoying at that point. Gambit is just frustrating, up until you earn the spyglass, which flashes you one of your opponent’s moves before you submit your moves. There are a few other items like this that grant bonuses in these games, and they help even out a lot of frustration, especially the slide ruler in the fibbing game.

The game has a very old school look to it, and I mean pre-videogames old school. Every map is designed like a board game, with all silver pieces looking like they came right from a Monopoly set, and the game’s logo itself being shoved on the edge of each map. Even the texture of the illustrations is similar to that of board game illustrations, including player pieces having different art styles compared to other character portraits and the world painted around them. It fits the game’s old world mood very well, as does the writing. 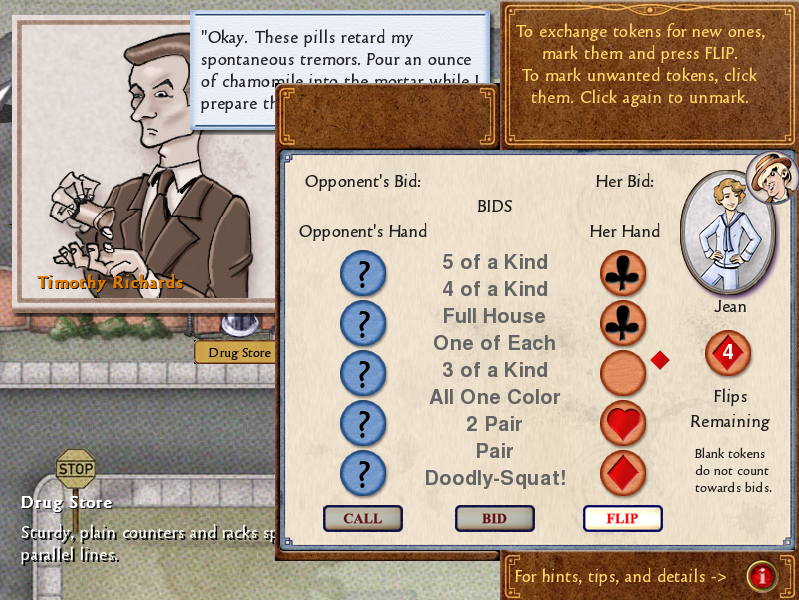 The character script is very clichéd and cheesy, which fits the hokey atmosphere of the early 1900s setting. Everyone is a big ham with odd speech quirks and old vocabulary, even your gang itself. Everyone also speaks differently based on who they are, like how the misogynistic coach is incredibly aggressive and openly hateful to any woman he talks to, or how the engineer Max has a habit of making his point unclear as he gets lost in his own nerdy tangents. It really makes the text heavy game fun to read, because every conversation will be radically different from the last. It helps keep the game fun from beginning to end.

It’s a good thing too, because the game goes on for quite awhile, and it slowly builds a much larger story in the background as you go along. The final hours are where the game goes from fun empowerment fantasy to outright and direct criticism of male dominated society, and it doesn’t hold any punches. Amazingly, though, it avoids the easy way out of creating a series of straw misogynist characters and instead directly challenges the flawed values of a society that allows mobs to go unchecked or abides half of its population suffering in silence. The then major villain of the game gets a bit of last minute development, and then things quickly swerve as another random person interferes and nearly does something horrific to one of your gang. What follows is a long series of conversations with town citizens, revealing more of the Brighton’s vile origins and creating a series of challenges to the four main tenets held by its people. 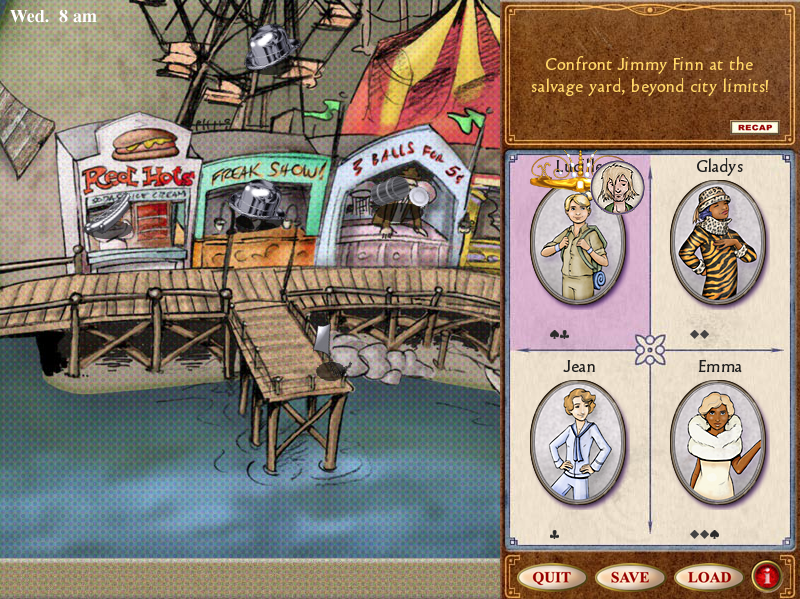 These final hours are what elevates the game from a mere fun time-sink to a fun game that is also a feminist critique of its setting. The commentary is spot on, and the resolution is incredibly satisfying, even if it’s not quite what you’d expect. The end is less about punishing those who did wrong, and more of the girls overcoming the self-defeating beliefs they had been taught for so long helping others do the same for the sake of their own happiness. It puts across the main values of feminism without preaching about it, but instead showing why those values can be a positive force. It’s a brilliant way to present the basic thesis of the philosophy, avoiding direct challenge to the audience and instead creating a believable scenario that is resolved by those values. That’s always been something difficult to pull off in any medium, but it’s done almost effortlessly here. In fact, the game’s writing was so good that the Writers Guild Awards nominated it for best writing in a game in 2009.

Despite the low end art styles on display, the twenty dollar price it was released at is fully justified. Dangerous High School Girls in Trouble is an amusing, funny and brilliantly written game, and one that tries something almost never tried in the gaming medium with a great deal of success. While a few minigames proved a tad lackluster, just how much it does right makes it something that needs to be experienced, especially if you’re interested in Great Depression America. Also, there’s probably not a board game style game you’ve played quite like this. It’s an interesting curiosity and a smart bit of commentary at the same time.