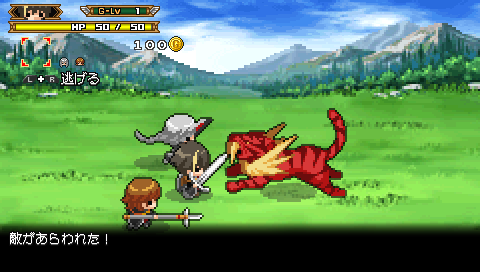 The second Half-Minute Hero game, The Second Coming, focuses entirely on Hero 30 mode. Thankfully, it includes changes meant to mix up the gameplay to keep the experience entertaining from end to end.

The game is split into five chapters, starring a number of distantly related, similarly named protagonists. The plot of each chapter is generally more serious than the original game, but that didn’t stop them from making extensive homages to various other games. Chapter 1 takes its cues from Shadow of the Colossus, and Chapter 3 ends on a scenario so liberally borrowed from Final Fantasy VI that it’s hard to believe they got away with it. 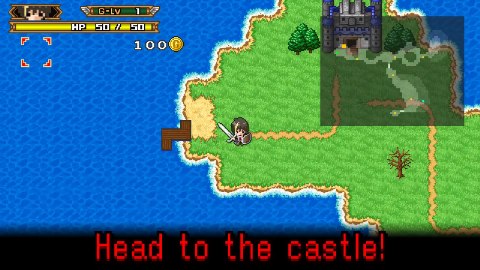 Half-Minute Hero 2 has a number of fundamental changes to the Hero 30 formula. The first is that enemies now appear on the overworld. Enemies that are a higher level than your character flash red on the overworld, proximately-levelled enemies flash yellow or not at all, while blue-flashing enemies can be defeated just by touching them on the map.

The second major change is the addition of regular party members (which were almost an oversight in the original), complete with special party formations. The game allows you to have two parties at once, even letting you swap them in the middle of battle (once per battle). Annoyingly, the game restructures your entire party every time the plot adds or removes someone from your group, even when replaying stages!

Another major addition is the “Hero Castle,” a massive, walking structure you will be able to command in outdoor stages.  Your castle and hero have separate equipment and levels, the castle moving faster as it squashes regular enemies. Giant enemies sometimes roam the land, and your castle is the only way to fight them. For all the fuss, the castle is barely used in the average level of the game, and is mostly a gimmick and in-game money-sink. In between Hero 30 stages, the Castle serves as home base, featuring various shops and features. 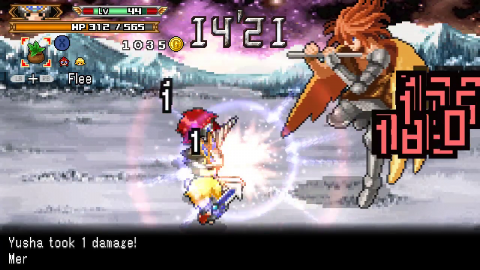 Unlike the original, Half-Minute Hero 2 has a true overworld and between-stage gameplay in the form of “Global Mode.” While in Global Mode, you can also explore Global Dungeons and fight monsters. Global Mode changes several of the game’s rules: you can Dash without a health penalty and can accumulate cash and experience to your “Global Level,” which takes much longer than levelling during Hero 30, the joke being that Global Mode is more like a “real” RPG than Hero Mode.

Your Global Level is more important than it might seem, as it defines your starting level in Hero 30 stages. As a result, enemies are allowed to get stronger over the course of the campaign, and you are not forced to fight the same slimes and goblins at the start of every single stage. Unfortunately, it’s easy to over-level in the Global Dungeons, taking out the challenge of older and even newer stages. There is a “Level Down” item you could use to try to fix the problem, but it’s impractical, and is only available at the in-game casino.

Achievement-style Titles return, this time with in-game rewards. Accumulating Titles will unlock new purchases, along with Classes you can use to change the way your hero plays. The game also has a Final Fantasy IX-style Skill system, which gives you special attacks at regular intervals.

One of HMH2‘s biggest problems is that it can’t keep track of its narrative tone. Chapter 1 and 2 are largely dramatic, Chapter 3 is full-on comedy until the final hours (when it turns over script-writing duties to Squaresoft circa 1994), and Chapter 4 sways back and forth, as though the writers have no idea what tone to aim for. By the time the story reaches Chapter 5, it’s gone full-bore into melodrama. 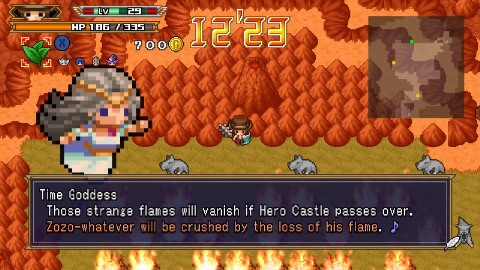 As for distinct modes, the game has online time trials, which replace head-to-head multiplayer. The game has a level editor and the ability to access community maps. The most unique mode is Infinite Hero, a mode where you fight one Evil Lord after another to see how long you can last, with minor prizes for killing 100 Lords in Normal and Hard, respectively. The map used by Infinite Hero mode swaps every ten Evil Lords, and some of the maps are from HMH1, often carrying fragments of their original quests as a speed bump.

Half-Minute Hero 2 eventually acquired a single piece of DLC, which has two distinct titles depending on where you read about it: “The Time Goddess’ Treasure Pack” or “Sexy and Sengoku.” This DLC unlocks two mini-campaigns of three levels each. These can be accessed in Chapter 3 and 4, respectively, and you’ll want to play them before the end of the chapter, lest they become unbalanced (disappointing anyone who bought the DLC after completing the game!). 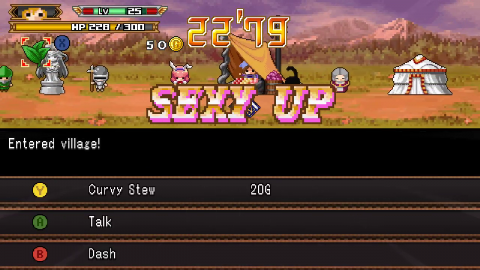 The “Sexy” campaign attached to Chapter 3 is only sexy in the tackiest manner possible. Its gameplay is standard Hero 30 fare, and unremarkable. At least the developers found an appropriate home for the ball-gag snail enemy that, was for some reason, already a part of the main game?

Chapter 4’s “Sengoku” campaign is far more unique. This campaign takes the usual Hero 30 formula and stuffs it to overflowing with quick and rapid events, creating sheer chaos as the nation of “Zapan” unites and then conquers the planet. This unique play style helps it stand out compared to its “Sexy” counterpart.

In addition to the two campaigns, the DLC contains new shops stocked to fix an oversight in the game’s crafting system. By all rights, this should have been in a patch.

While The Second Coming has lost the “pick up and play” nature of the original, it maintains the “one more stage” syndrome. The western release on Steam includes a copy of the original game, plus the sequel’s soundtracks, as free bonuses, and is identically priced to the original to boot.