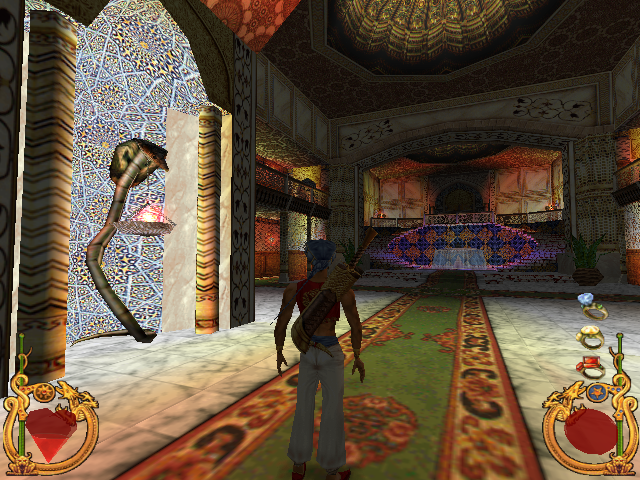 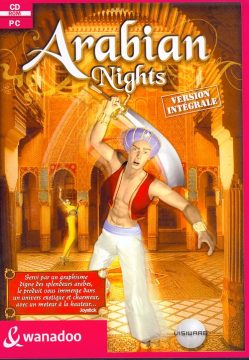 After Red Orb Entertainment failed with their official attempt at a 3D Prince of Persia game, the guys at the somewhat schlocky French developer Silmarils (Ishar, Robinson’s Requiem) apparently thought they could do better. Well, they were wrong.

Like Prince of Persia, Arabian Nights stars an average dude who’s on a quest to rescue and marry a princess in order to become prince. He even wears the exact same clothes as the protagonist in the Macintosh versions of the 2D Prince of Persia games – but then again, the same colors are also worn by the hero of Magic Carpet, so maybe it’s a more pervasive cliché among game developers.

Arabian Nights, however, shows the Middle East how it “really” was, so of course the hero is named Ali, and he is not only scheduled to marry his beloved Melisse, but promised by the Sultan the hands of all his five daughters to assemble a proper harem and inherit the throne, if only he manages to rescue them all from the – of course – evil Grand Vizier, who’s scheming to take over the sultanate. In the visions you get of them doing erotic dances, most of the princesses of course wear almost nothing, and since this is a French game “almost nothing” means their nipples are shining through their transparent lingerie. What really kills it, though, is the dopey, lusting look on the would-be prince each time he senses the opportunity to shag yet one more princess on his wedding night. 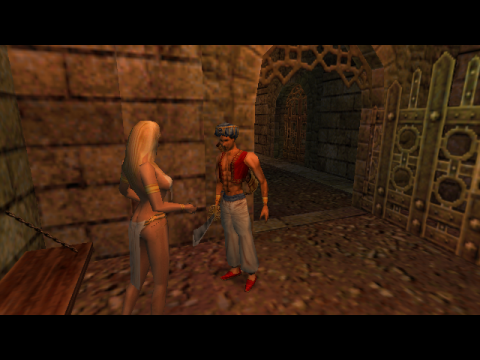 The “hero” meets the princess – well, one of them – for the first time.

At the beginning Ali finds himself as far from the throne as he can imagine – chased through the streets and then imprisoned without even knowing who his antagonist is. He first needs to make his way past many assassins and devious traps to even reach the sultan, both easier said than done in this game. Whenever you face your opponents, the camera apes the weirdly tilted duel perspective of Prince of Persia 3D, except you usually have to fight several foes at once, which makes the view even more impractical. There’s no feel of weight to the combat either, so you won’t even know how fast you’re getting hit and mowed down. The hero learns magic spells that allow him to stay at a safe distance while bombarding his enemies, but their use is limited by magic power so eventually he has to get back in the fray. During melee, there’s not much depth to the controls, so most of what you can do to better your standing in battle is dodging in and out of the action.

The problem: The controls feel even wonkier than Prince of Persia‘s, without the hidden precision underneath. When running, it is unnecessarily hard to keep Ali under control, making it very frustrating to deal with the various traps, especially the timed mechanisms. There’s a contest with a genie that only adds insult to injury by making your view wobble around in an intoxicated haze while you have to hit a bunch of floating genie heads within a very strict time limit, which is almost impossible to pull of with the terrible controls. 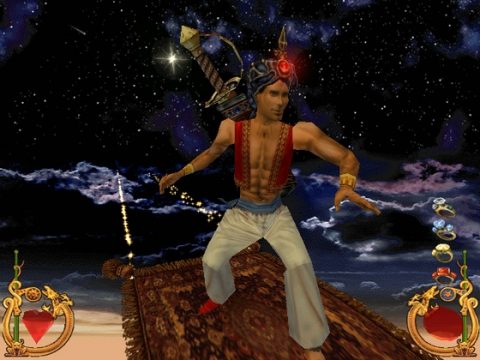 In between the action scenes, you usually just work through the same tired old switch puzzles and obstacle pushing puzzles found in every other boring nineties action adventure. To prove it can one up most of its competitors in clichéd tedium, Arabian Nights even includes a traditional slide puzzle where you move the tiles by jumping on them. Occasionally there’s a bit of refreshing genuine Arabian Nights feel, like when you move around vases and then play the flute in front of them to make climbable ropes raise into the air, but the imaginative nature of the puzzle proper remains. Some of the princesses are bound by a spell, and Ali has to dance with them to break it, which unfolds in form of a Simon style mini game.

Arabian Nights undoubtedly is the most fun during the interactions with colorful characters like cutthroat tollgate guards, genies that look like they’re copied straight from Disney’s Aladdin, and a “hilariously” chubby prostitute and her clients. The writing is really bad and full of offensive stereotypes, but enjoyable in the same way a cheesy old TV show like the Adam West Batman is.

The visual design is also rather setting-appropriate and Silmarils certainly did their best to imitate the rounded oriental architecture associated with old Arabia, but that measure of detail in some places is obviously bought with awfully blocky layouts for most everything else. And as interesting it is to see the city or the royal gardens, more than half of the game takes place in underground dungeons where a much duller look dominates. There are also a few maps that clearly weren’t thought through properly, as you can actually climb out of the level without resorting to cheats.

While Arabian Nights was a pretty big mess to play, the distribution model for the game was actually fairly ahead of its time. It was initially sold episodically as kind of the headliner for a digital download online platform called Serial Games. The game later saw releases on disc that compile all episodes together, but you are still made aware of the initial structure by silly title cards with text previews of the next episode, usually at obviously forced cliffhanger scenes. Since Serial Games is long gone, you’re probably most likely to find the game in France or Germany nowadays, although there also was an US release courtesy of The Adventure Company.