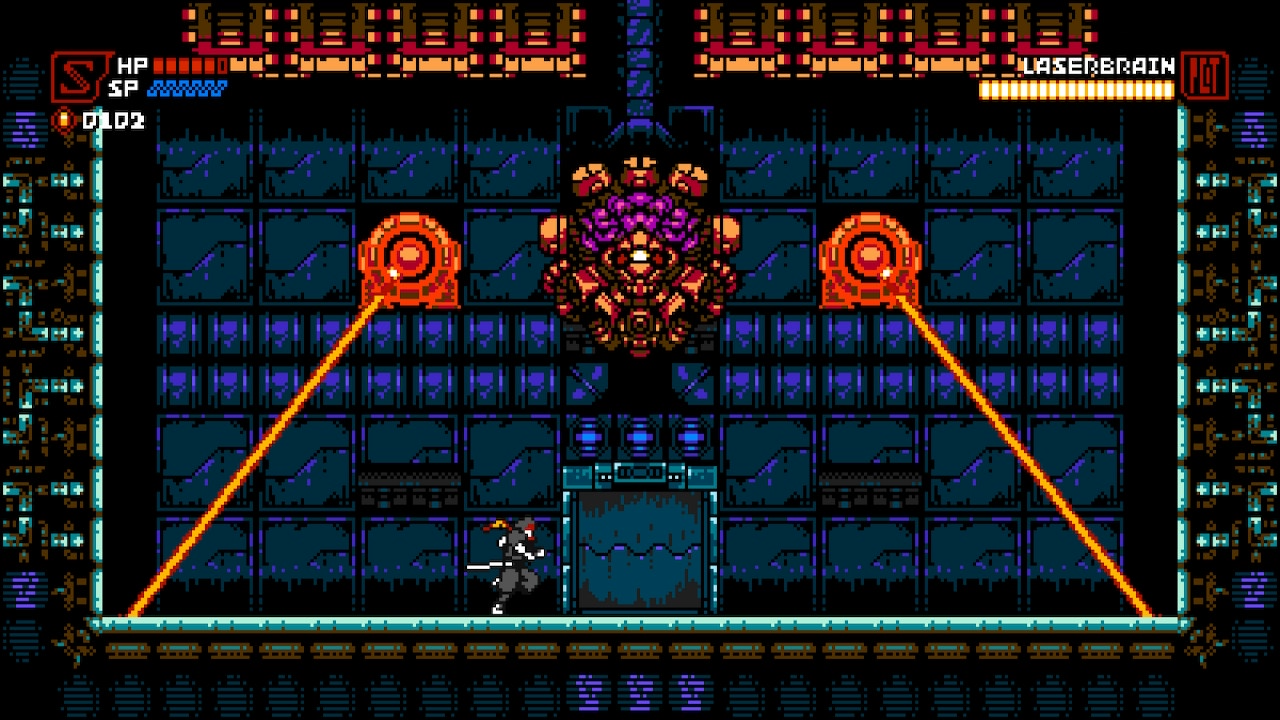 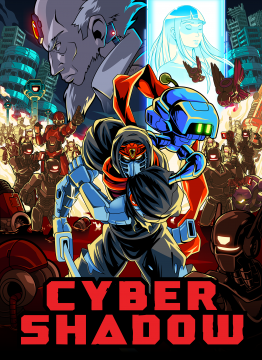 Cyber Shadow is a “modern-retro” game which harkens back to the halcyon days of the 1980s – the golden age for both ninjas and the Nintendo Entertainment System. Developed by Mechanical Head Games, and published by Yacht Club Games, Cyber Shadow was designed over a period of five years by one man – Aarne Hunziker – with music by Enrique Martin. It’s is a devoted love letter to NES-era games like Ninja Gaiden and Shadow of the Ninja—with just a dash of Mega Man and Metroid to spice things up. The game is brimming with challenging gameplay, catchy synth tunes and pixel-perfect, sprite-based art, just right for any player willing to overcome the game’s uncompromising difficulty.

The player takes control of the eponymous Shadow, a ninja who wakes up in a cybernetic body, after having died in an apocalyptic explosion. You’re given very little time to ponder your new existence before being called to action: your clan of noble ninjas has been betrayed and your master has been kidnapped by the nefarious Dr. Progen and his synthetic android army. It’s up to you to rescue your clansmen and stop the mad Dr. Progen from wiping out the people of Mekacity. 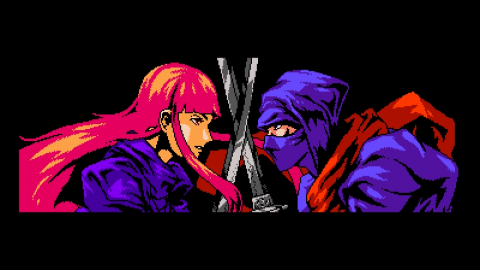 While the story doesn’t break new narrative ground, it’s well told through dialogue, entry logs and era-appropriate animated cutscenes. While Shadow himself is a cypher, the other characters have enough personality that they feel like real people. The Master’s empathy and wisdom comes across as she teaches you the ways of the ninja, and the villainous Dr. Progen’s descent into madness is motivated by a tragic, personal loss. The story gets the job done, and doesn’t get in the way of the action.

The gameplay is as straightforward as the plot would suggest: Shadow slashes his way through hundreds of enemies across a dozen stages. Along the way, he picks up new abilities by thrashing a respectable number of challenging bosses and freeing his fellow ninja. There’s even a couple of vehicle sections in the middle of the game which shake things up, and are thankfully not as frustrating as those sections from games of the NES-era, like say, Battletoads. 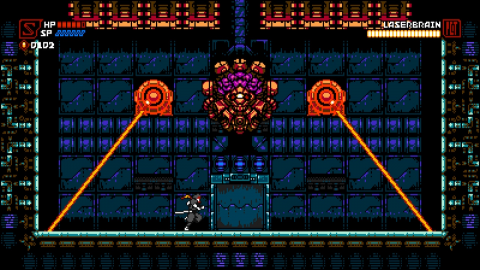 Shadow controls very well, with his many abilities mapped to just two buttons and the directional pad. Also, while the controls are generally tight and responsive, the player learns a parry ability around the midpoint of the game that never feels like it works quite as well as it should.

The stages are presented in a very linear fashion like in Ninja Gaiden, but they’re actually interconnected like in Metroid – though not to the same degree as in that series. Exploration and backtracking are encouraged and several optional side passages lead to extra hard platforming trials which reward the player with extensions to their health and spirit bars, as well as the occasional Easter egg referencing the Teenage Mutant Ninja Turtles. To the credit of the game’s design, most of the side paths are near tele-porters which bypass some of the more brutal platforming sections, so you’ll only have to play through the game’s most insidious sections once. 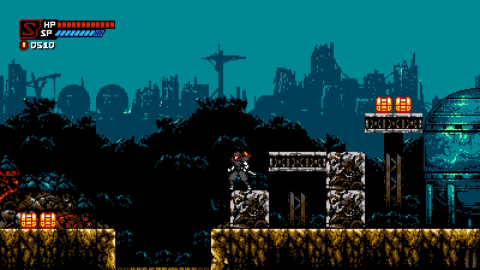 Shadow starts out with just his razor-sharp katana, scant hit points, and no special abilities. It’s only over time that Shadow will learn to throw shurikens, double jump and dash across the screen. While the steady drip-feed of abilities keeps the game fresh, certain moves like the dash, the double jump, and the wall-cling are earned rather late in the game. Some players might feel let down that they have to play so long before their avatar is as agile as those of more modern games.

The player will need to master all of Shadow’s abilities if they hope to surmount the game’s many, many hurdles. The early levels aren’t so tough, but just before the game’s mid-point, there’s a dramatic increase in difficulty. Pixel-perfect jumps over bottomless pits, dive-bombing aerial enemies and the occasional trip to bullet-hell await you—oftentimes, you’ll find yourself beset by all of these things at once. It can be overwhelming,but it’s generally not an unfair experience on the whole, just a demanding one. And for all the controller-breaking gameplay, it really is satisfying when you finally make it over an impossible chasm, or defeat a seemingly-impossible boss. 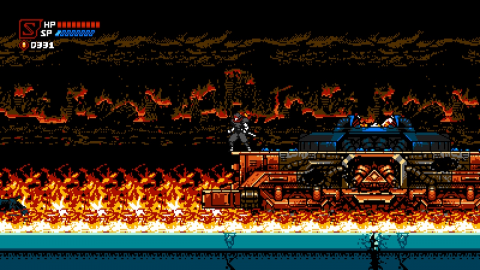 Cyber Shadow’s old school difficulty is made manageable by saving at checkpoints throughout the levels. These checkpoints are placed frequently at first, but they become spaced further and further apart, as the game progresses. Checkpoints can also restock the health and spirit gauges for an expense of “essence,” the in-game currency. Special checkpoints may even provide offensive upgrades, such as the Ningun, a multi-directional cannon, or the Swag Blade – a spinning buzz saw which encircles Shadow and shreds your enemies from a distance when hit by your katana. These special upgrades are available permanently from their respective checkpoints once purchased and provide a welcome variety to Shadow’s skill set, and are dearly missed when they disappear after taking three hits.

The game’s boss battles are real show stoppers. Despite the limited 8-bit color palette, every boss is rendered in saturated colors. From samurais wearing jetpacks, to enormous, grotesque mutants, every boss has their own look and feel. As in any action-platformer, the secret to surviving each encounter is to pick apart the enemy’s attack patterns and then look for an opening to strike. Thankfully, few fights feel like a battle of attrition. The battle with the Mekadragon in the game’s early hours is remarkable both for its detailed design, as well as the actual mechanics of the dual. The finale with Dr. Progen is a classic, three-parter which will task you with using your every ability in order to succeed, and is by far the most difficult encounter in the game. 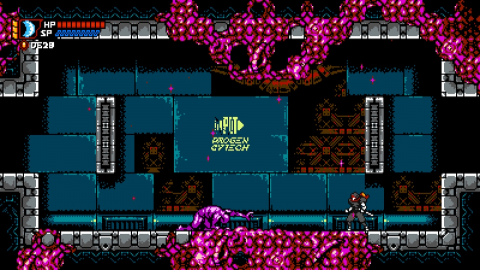 Visually, Aarne Hunziker does an excellent job of rendering the post-apocalyptic metropolis of Mekacity and its denizens. The art style has a distinctly 80s cyberpunk anime feel, and the low res sprite artwork belies an incredible attention to detail. Shadow’s sprite is small and relatively simple, but articulately animated. There’s a great variety in the levels in which to explore, ranging from a bombed-out cityscape, a futuristic industrial factory, to pulsating, living passages full of bio-organic matter that wouldn’t look out of place in Super Metroid. Special attention was paid to the many gorgeously illustrated cutscenes which pop up throughout the adventure – including one with a very on-the-nose homage to the opening of Ninja Gaiden.

On the musical side, Enrique Martin and his producer, Jake Kaufman crafted an excellent collection of techno tracks evocative of NES-era chiptunes. While the action is scored with plenty of punchy, synth-rock beats, there’s plenty of musical variety on display. The opening overture that plays during the title sequence is somber and atmospheric, and feels like something out of the Vangelis score from Blade Runner. One particular boss theme opens with a chilling prelude that adds immediate tension of the battle. It’s a great listen. 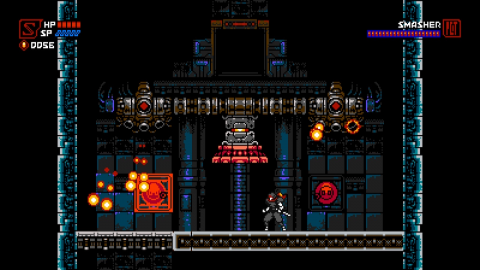 Cyber Shadow was released on every major gaming platform, but special care was taken with the Nintendo Switch release. When the player scans any of the Amiibo figures from the Shovel Knight series, a mini version of that knight wearing a jetpack will appear beside Shadow. The little armored companion will change the player’s color palette to match their own (blue for Shovel Knight, gold for King Knight, etc.) and proceed to follow the player around, attacking enemies at random. Their chivalry has its limit, and after a little while the little knight will putter out and fall asleep wherever they land. The Amiibo functionality isn’t a game changer, but it’s a nifty inclusion for those who want it.

Shadow’s journey from scrub to ninja badass is a hard road to travel, and may not be for everyone. Expect to die hundreds of times (yes, the game keeps track) over the course of your first play through – which could be five hours, or fifteen, depending on your skill level. For the patient gamer who enjoys overcoming impossible odds, Cyber Shadow is a memorable and rewarding iteration on the 2D action-platformer.