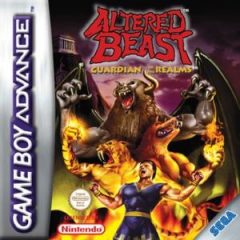 Sega entered into a devil’s pact with THQ regarding their Game Boy Advance games. A few of their classic properties were given to Western developers to “update” them for the portable format. The GBA version of The Revenge of Shinobi turned out nothing like the game it was based on. Altered Beast: Guardian of the Realms ended up a little bit better – at least the developers, a small company called 3d6 Games, seemed to be familiar with the original title, even including recreations of many famous sound clips. The result is a game that’s maybe a little too close to its source material. 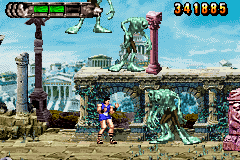 Once again, you’re a fallen soldier who’s been resurrected to fight evil. This time a dark reaper named Arcanon has stolen the keys to “Realm Gates” in an attempt to command an undead army to take over Olympus. The gameplay is just like the arcade version, except there are a couple more power-ups to find, including health restoratives, power waves, earthquakes, and a strange item that temporarily sets your character ablaze. 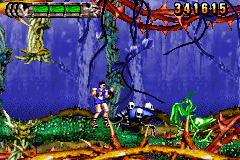 The biggest change – and ultimate downfall – is that the levels are way too long. Each stage feels like it takes forever, with the same repetitive scenery scrolling over and over again, and there’s no way to cut them short like the arcade game. Plus, there are 15 stages altogether, though you can save between them. 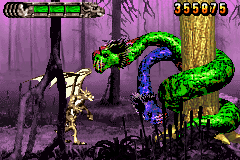 Admittedly, the backgrounds are pretty cool, and the levels run the gamut from Ancient Greece and Egypt to a volcanic land, underwater stage and some kind of weird cosmic outerspace level. Even so, it’s hard for the visuals to have the same impact as the arcade original when it’s running on a tiny screen. The same compliments can’t be paid to the sprites, which all have a crappy computer rendered appearance to them. Many of the monster forms look really bad, although there are some interesting transformations. 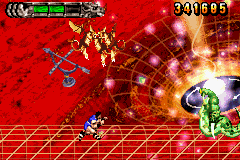 The returning forms have been granted new names – the werewolf is now Canis, the dragon is now Draco, and the tiger is now Smilodon. The new ones include Naga, a serpent; Terapis, a spiked turtle; Carcharodon, a shark, borrowing from the Famicom version perhaps; Cerathos, a rhinoceros; Avion, an eagle; Scorpios, a scorpion; and Chimera, a chimera of course. You can upgrade each of these forms by replaying levels to find special artifacts. 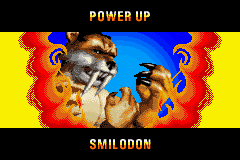 Overall, it’s far from being a remarkable game, but it’s good, cheap, stupid fun, as long as you play it in spurts.