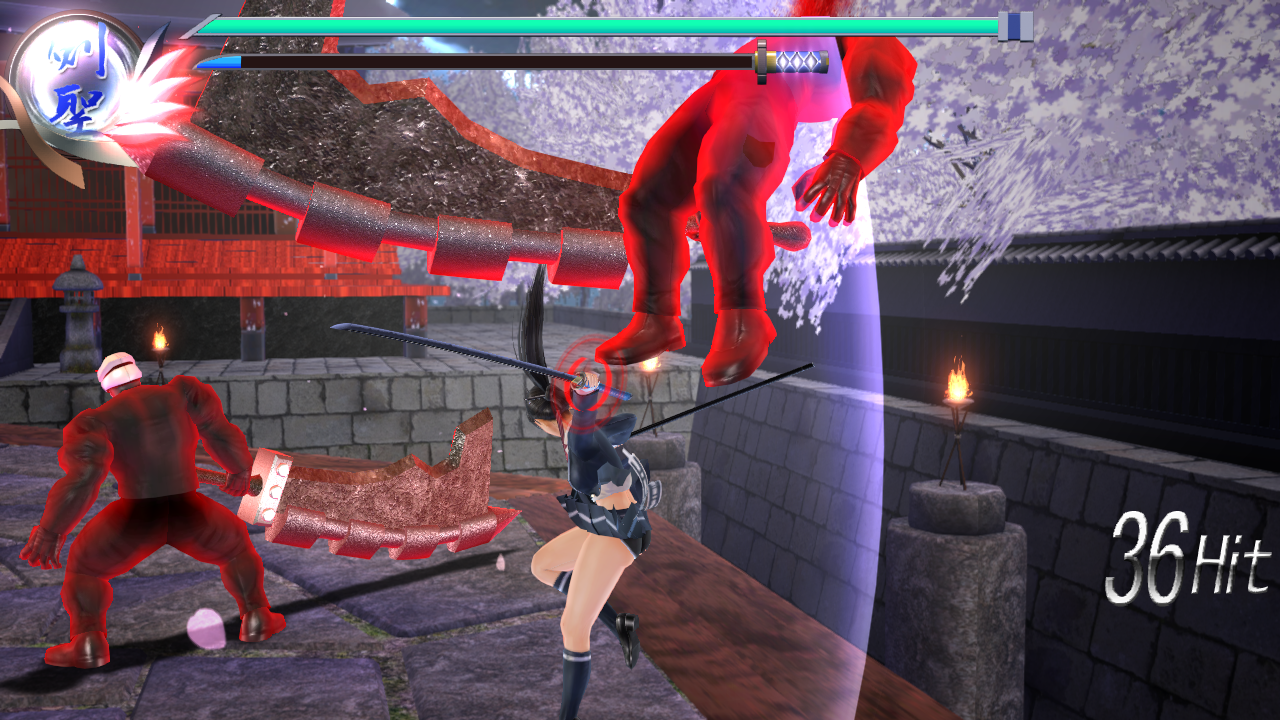 What’s great about Comiket is that you never know what gem you’re going to find there. The long running Japanese fan market isn’t just for porn doujins (though that is a very, very large part of it), but also comics and games of unique quality you won’t find anywhere else – and odds are good you’ll never see them again. Most of these titles are demos or proofs of concept, but sometimes publishers fish these titles out and release them to wider audiences. Thus how the west got Mitsurugi Kamui Hikae, a spectacle fighter that puts itself on a mechanical line between Devil May Cry and a more traditional beat-em-up. 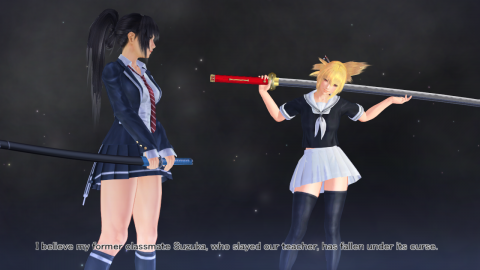 The game has a simple premise used entirely as an excuse plot. Blade Templar Misa has to hunt down her best friend Suzuka, who’s been possessed by an evil blade summoning demons into the world. Also, there are large robots there, because the developer thought they were cool. The game divides itself into five stages, each with multiple waves of enemies to fight to reach a boss, with stage five instead acting as a two stage boss battle with Suzuka. Every stage is just a round area where enemies spawn, no exploration or obstacle challenges whatsoever. Needless to say, it’s a short and simple game in scope, but there’s a lot more there than it would seem at first glance.

The game’s controls have a lot of options to work with. Along with basic movement, Misa has a sword attack and a melee attack, which she can switch between for combos. It’s a necessity, as successful melee attacks build back up sword meter, which is necessary to use the more damaging sword moves. She also has a charge stance she can use to unleash more powerful attacks that can hit multiple enemies, plus a jump necessary to use aerial attacks. On top of that, she has a guard stance she can dodge in, the ability to dash, camera rotation, and most importantly, Zanshin. There are no health items, so Misa has to regain health by dealing enough damage to enemies to make them enter bleeding status and glow bright red. Once that’s done, just press the Zanshin button and she’ll do a move where she puts her sword away, causing every bleeding enemy to take damage and release health that also builds back up sword meter. Zanshin also becomes more damaging the longer you’ve been dealing damage without getting hit, rewarding you with more health in the process. 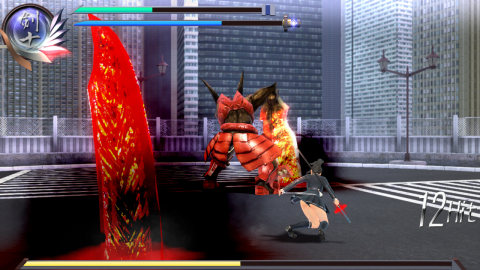 It’s advised you also kill enemies without a Zanshin finish, though, as the blood orbs they drop through normal means can be used to by upgrades and costumes. Beyond status upgrades, Misa can earn new moves that can radically change how you play the game, including aerial attacks, a sword dash, and improved charge moves. This is where the DMC and Bayonetta comparisons come in, as many of these moves take into account what direction your inputting along with the attack. Pushing in the direction you want to hit while you slam down the attack button no longer works, but it’s a fair trade off as these new moves open a whole mess of new options. Not only do they deal good damage, they can create more safe attack situations, letting you avoid counter attacks more easily, plus deal out more damage. Also, air juggling is ridiculously fun and incredibly effective, even if it eats through sword meter fast.

This is pure mechanical engagement, and it’s very well done, with multiple difficulties and new game plus to mess with, not to mention extra costumes to try and earn as a side goal if wanted. The game is short enough that simply playing to see how well you can do at different parts is plenty of fun, especially with some good bosses in the mix, especially the Suzuka battles. There are also enough enemy types to keep you on your toes, like gold robots that don’t flinch with each hit until they bleed, or the knights that will block your strikes. Thriving against large numbers and all these difficult enemies feels good, and some of the combo potential here is insane for a project of this small size. All the polish really makes this a gem among the indie action scene. The only real downside is the upgrade system. 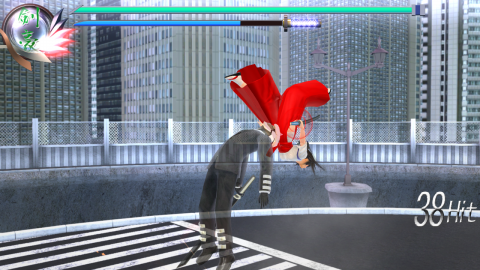 This feels mostly like a way to artificially extend play time and make some bosses unnecessarily time consuming. Definitely play on easy for your first play, as the second boss will become a damage sponge with the upgrade options you’ll have by that point. This does make new game plus fun, but you can’t really jump into higher difficulties off the bat because of this issue. That’s minor, though, especially for a game this cheap with such mechanical and design mastery on display. Hopefully, this is a sign of better things to come from Zenith Blue. Question is if we’ll ever see their work outside Japan again.