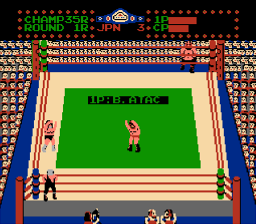 The NES played host to numerous professional wrestling games, ranging from mainstream fare like WWF Wrestlemania to oddballs like M.U.S.C.L.E. Falling somewhere in the middle of that spectrum is Data East’s Tag Team Wrestling. While the version of professional wrestling it presents strives for realism, its ill-conceived controls and comically small roster make it a disappointment to anyone who comes in hoping for another great NES wrestling game along the lines of Pro Wrestling.

Tag Team Wrestling was developed for arcades by Technos Japan in 1983, and was originally released under the title The Big Pro Wrestling. Over the next few years, it was ported to Commodore 64, IBM PC and Apple II by Quicksilver Software, and was finally brought to the Famicom by Sakata SAS in April of 1986. By that time, Technos had already created the far more refined arcade wrestling game Exciting Hour, but sadly none of its advances made their way into the console port of their earlier game.

Chief among Tag Team Wrestling‘s flaws is its central control mechanic, which has more in common with RPGs than other wrestling games. Rather than initiating moves from a grapple, you start by trying to land a punch on your opponent. If successful, you’re presented with a menu of the moves your character can execute, and three seconds to scroll through it and select one. There’s one upside to this: the game has a pretty big moveset when compared to its contemporaries. However, that’s where the praise ends, as the menu-based system fails in every other way.

The most obvious downside is that you don’t feel any of the visceral thrill of watching an actual wrestling match. But that’s only the beginning. Worse is the fact that placing such a high priority on landing strikes encourages button mashing and, wouldn’t you know it, the punch button is also the button you use to select moves. As a result, you’ll frequently find yourself picking the first hold on the menu by accident. Finally there’s the fact that the move names are poorly localized. Many are rendered as unintuitive abbreviations, and some aren’t translated at all. It’s barely possible to scroll to the end of the list in three seconds, let alone make sense of choices like “B BRIK” and “TECCHU”. And this is to say nothing of the fact that when playing against the CPU, your opponents can become invincible at will if you get too much of an advantage.

Even if Tag Team Wrestling were otherwise fun to play, its roster of two teams would still be a source of consternation. In the single player mode, you control a babyface team called The Ricky Fighters on their quest to win titles by repeatedly defeating a heel team called The Strong Bads. (This, of course, created Strong Bad in Homestar Runner.) Every few matches, the teams get a palette swap, and the mat displays a different pattern. But that does nothing to hide the fact that you’re essentially wrestling the same match over and over, ensuring that boredom will set in just a few matches into your career.

Tag Team Wrestling‘s problem isn’t that it failed to innovate; rather, it’s that the ideas it introduced to the wrestling genre just weren’t worth pursuing further. Technos clearly knew that, as the radically different controls they adopted for Exciting Hour remained the standard for years to come. Meanwhile, Tag Team Wrestling‘s menu-based system was rightly consigned to the wastebasket of wrestling game history.