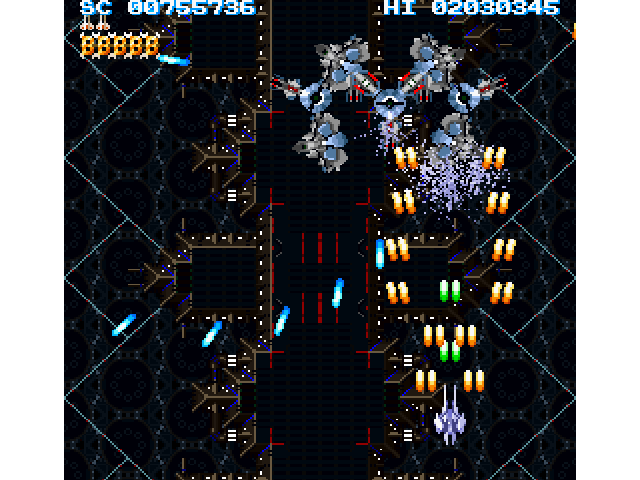 When Sharp released its famous X68000 computer in 1987, it was the most powerful home gaming machine on the market. With a 16-bit 10MHz processor, 1MB of RAM (and ability to extend the memory to 12 MB) and a dedicated GPU it could almost match the power of the late 1980s arcade machines. Naturally, it became the go-to platform for releasing nearly arcade-perfect ports of many well-known games, especially from the shoot-em-up genre.

Eight years later, Famibe no Yosshin released first version of his homebrew shmup Cho Ren Sha 68k at Comiket, a doujinshi convention held two times a year in Tokyo. By this time, the fifth generation consoles have already arrived while the PC gaming market became dominated by IBM machines, all of them outperforming Sharp’s computer (which had already been discontinued in 1993). The X68000 was simply not enough for most of the new games – but it was perfect for Cho Ren Sha 68k.

Even in 1995 Cho Ren Sha was old-school. It’s a vertical shooter heavily inspired by those made by Toaplan (a small tribute to them can be found in the high scores table: all the default names are Toaplan shooters). It’s simple and minimalistic – there is only one ship, there is no autofire, scoring mechanics are easy to understand, bullet patterns are fast and dense but not overly intricate (as every bullet – with an exception of occasional homing missiles – will simply fly in a straight line at constant speed) and plot is virtually non-existent. That is not to say that Cho Ren Sha is yet another generic shmup as while it doesn’t really innovate, it certainly perfects the formula of arcade shoot-em-ups of 16-bit era. This game’s greatness does not come from the concept but from its execution.

Cho Ren Sha‘s level design is amazing. Every level consists of multiple waves of enemies approaching player’s ship from various directions – and their movement patterns have dance-like symmetry (if one wave consists of a few popcorn enemies on the left and a bigger ship on the right, you can be almost certain that the next one will be the same but mirrored) and rhythm. It helps that everything is synchronized with the soundtrack composed by Loser Kashiwagi (a prominent doujin musician known for composing soundtracks for several visual novels and contributing remixes for arranged versions of soundtracks to popular shoot-em-up games from Touhou and Psyvariar series).

The music itself is also one of the game’s highest points. The fast-paced, energetic level themes include some of the best chiptunes ever created while the boss music is appropriately tense and ominous. The sound effects aren’t as good – they’re rather quiet and inoffensive (as if they didn’t want to distract the players from the music), sometimes satisfying but never outstanding.

Scoring in Cho Ren Sha is based on three basic mechanics: killing enemies, receiving bonuses after completing a level and collecting items. The first two are fairly straightforward: player who aims for high score should try to shoot down every enemy ship (preferably destroying every part of the boss separately and “milking” enemies who fire destructible projectiles) and finish every level with a full stock of bombs, an active shield and as many one-ups as possible. There isn’t much risk vs reward here – the game simply gives higher score to those who play it without much dying and bombing.

Item collection is a bit more involved: when the player destroys a red power-up ship, it leaves behind three items: a power-up which increases the strength of player’s weapon, a screen-clearing bomb and a shield which allows player to take one hit without dying (it also functions as an autobomb, although its damage output won’t destroy anything but the weakest popcorn enemies). Points are given only for collecting an item when already having its full stock and taking one causes all the others to disappear. It’s possible to get all three by positioning your ship between them and keeping it there for a few seconds, although it requires a bit of precision and can be quite risky.

Every million points, a shield (provided that the player already has one) carried by a power-up ship will be replaced by a one-up item. It’s possible to use a trick described above to grab it along with a bomb and a power-up but it’s even riskier than usual because if the player accidentally takes something else, a one-up will be lost forever (or rather until another million points).

Cho Ren Sha‘s power-up system is one of its more recognizable features. It inspired similar mechanics found in Fraxy and Crimzon Clover.

Cho Ren Sha is fairly long for a vertical shooter. The game lasts for seven decently sized stages and two loops (interestingly, the explosion from which the player’s ship emerges at the beginning of stage 1 is triggered by the destruction of the first loop’s last boss), followed by a true final boss. After that it returns to the title screen, from where two even harder loops can be accessed by using the continue option. This way, expert players can go as far as loop 8 before the game comes back to the first one.

Game’s endlessly looping nature means that its use of a single repeating background is a clever little touch, although it doesn’t change the fact that it’s pretty boring. Other graphics are very good though – especially the designs of larger enemies and bosses. While most of them are static, some have nice animations which usually show them unfolding, transforming or assembling themselves. Such animations have a noticeably mechanical feel to them and are quite reminiscent of similar sequences in 1990s mecha anime (e.g. Neon Genesis Evangelion).

Speaking of bosses, they’re probably the most challenging parts of the game. While the stages might get chaotic as the game goes on, they’re usually not too overwhelming (provided the player has adequate firepower). Bossess, on the other hand, barrage the player with a constant stream of bullets and missiles. Some fights can be made easier by using certain tricks – the bosses that appear on the end of first level for example may be tricked into destroying each other.

Another one of the game’s secrets is its hidden menu accessed by holding down the up button on the config screen. It allows player to start the game from an arbitrary stage or loop, make himself invincible and change the speed of enemy bullets. More interestingly, it also allows to play the game in boss rush mode and gives players access to a hidden – and extremely difficult – stage (it’s labelled with the word ‘showtime’ instead of the usual stage number), although both the boss rush and a secret stage lack any power-ups.

The Windows port released in 2001 at the first glance seems to be a perfect conversion from the X68000 version – the sprites, stages, loops, enemy formations and music are all the same. When playing both versions, one difference becomes noticeable (and extremely annoying to those used to the original): the game runs faster on Windows, making it more difficult (according to the developer, Cho Ren Sha rus at 55fps on X68000 and at 60fps on Windows).

In addition to being more difficult, the port has a strange way of dealing with resolution. The original version used 256×256 resolution, typical for the X68000. The PC version uses 640×480, with the playing area taking up a 480×480 square in the center of the screen and the rest being left unused. The game isn’t really upscaled though as it still has the internal resolution of 256×256, just stretched to fit the new dimensions. For this reason, the game looks a bit less sharp on Windows than on X68000.

When emulating the X68000 version, make sure to turn the MIDI sound off as the game does not support it and will refuse to start if it’s turned on. On Windows, running Cho Ren Sha should not be a problem (some players report sound issues, although they can be solved by running the game in Windows 98 compatibility mode).

Cho Ren Sha 68k has a place among the classics of shoot-em-up genre. While it doesn’t have the originality of Radiant Silvergun, the production values of Cave games or unusual mechanics of Battle Garegga, it makes up for it with an intense, tight and well-designed gameplay. It’s a labor of love – a doujin shooter with quality that surpasses many commercially released titles. The game’s hard but fair (at least on X68000) difficulty, intense gameplay, memorable bosses and amazing soundtrack make for an addictive experience and quite a bit of lasting appeal.