Net Guardian is a doujin shoot-em-up for the PC98 released by Moguraya Soft in 1997. Though Net Guardian doesn’t bring anything new to the table and looked dated even back when it was first released, it’s still a very weird and remarkable game.

The story is about an antivirus program represented by a fairy flying through the internet to destroy computer viruses. Computer viruses usually take the form of either a giant robot or a giant cartoon girl who is always wearing something ridiculous. 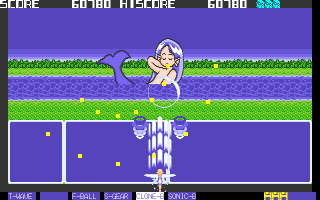 There are eight levels, all of them having a theme. Levels 1, 3, and 7 have a sci-fi feel. Level 2 looks like it was taken out of an old school RPG. Level 4 and 6 have a horror look about them. Lastly, level 5 and 8 look strange, supposedly intended to appear like they take place in heavily infected parts of the computer. Some levels are much longer than others, having multiple sub-bosses or dangerous terrain to avoid. Others are very short. The horror levels consist of a short hallway and then you go straight to the boss.

Although Net Guardian is a vertical shoot-em-up, its gameplay is somewhat strange. Enemy bullets are very slow, shaped like squares and come out in patterns, though they’re very simple, giving it an old school feel. Sometimes bosses also have other attacks, such as really fast lasers that are hard to dodge. Whenever one of these are imminent the game gives you a warning and tells you a really huge attack is coming up, which is pretty cool. Warnings also come up when enemies start coming from the rear, but this doesn’t happen nearly as often. 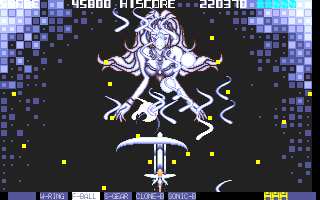 It also has an upgrade bar, similar to Gradius, though it works differently here. The first four upgrade slots are weapons. You can change your weapon with these and upgrade your weapons with power-ups, completely different items from upgrade tokens. If you switch a weapon, you stay at your weapon level, which is very convenient. The last two upgrade slots are bombs. Picking one up switches your bomb to the one you upgraded on and gives you an extra bomb stock.

Your wide shot. It shoots huge waves in the shape of arcs and stops once it hits something. When upgraded, you shoot more and can wipe the entire screen with them. Unfortunately, Tidal Wave does the least amount of damage and can be hard to aim when you have to shoot a specific part of a boss.

This is similar to the ripple laser from Gradius. It shoots two circles that get bigger as they go. It does decent damage and is easy to use. Once at their largest, they start shrinking and growing again until they leave the screen. It’s your default weapon, so expect to use it a lot if you die frequently.

This summons up a ball of fire to circle around you a few times and absorb bullets before shooting off, usually straight into an enemy. It’s the only defensive weapon in the game and does good damage, though it takes practice to aim it when it fires because it rotates a set number of times before firing.

This is the most powerful non-bomb weapon. It fires off very slow moving gears that pierce right through enemies and does a ton of damage. The gears move so slow that they can be hard to aim right, but it’s great for taking down bosses, especially because some bosses are not particularly mobile.

By far the coolest weapon in Net Guardian. It makes several clones you’re your fairy sprout forth and fly toward the end of the screen in a straight line. It does a lot of damage, erases bullets, and is your default bomb. This is the other type of bomb. Sonic Boom does a lot of damage, so much that they make very short work of bosses. Unfortunately, they have very short range, so you have to be right up in an enemy’s face for it to hit, which is very risky. They require a lot skill to use, but when used effectively, are more than worth it. 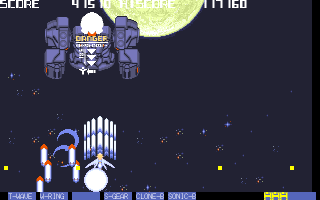 The controls are pretty simple. X shoots, Z upgrades, pressing both Z and X together bombs, and you use the arrow keys on the number pad to move. You can easily configure it to a game pad using JoyToKey. Mapping bomb can be a bit tricky on some gamepads, and you have to hit Z and X at the exact same time to get the bomb to go off.

The scoring system is pretty simple. There are coins with stars on them all through the game. Sometimes enemies drop them after dying. Sometimes they’re just lying around. Other times they’re bait for a trap and getting them will get you killed. Star coins give you more points and give you a “Bonus!!” message every time you pick one up. You get unlimited continues, but using one sets your score back to zero.

The graphics look pretty dated, even for a PC98 game, though that’s to be expected from a doujin game. Presentation is also very uneven. Some sprites have little to no animation, such as the blockheads in level 5 or the sub boss of level 3. Others have very detailed animation, such as the tail of the raccoon girl at the end of level 5. The music is very good though, even if the boss theme gets overplayed a little.

Something which could disappoint shooter veterans is the lack of difficulty levels and options screen, since the game is quite easy. Even with the lack of options, there is one extra feature. Moguraya Soft has a strong sense of humor running through Net Guardian. All of the art is done in a humorous style and looks like it was made with MS Paint. Things do get a bit more serious near the end, though this is mostly to pump you up for the final boss. Stick around during the ending credits and you can see silly little comics the programmers made on their down time. Strangely enough, the comics are in English. It seems Moguraya Soft did not make any other games besides Net Guardian, even though it was pretty good and had a lot of personality.

Links:
Vaz Comics has screenshots of some of the bosses and sub bosses, along with the game’s ending.
Enterbrain has online pages from the manual.