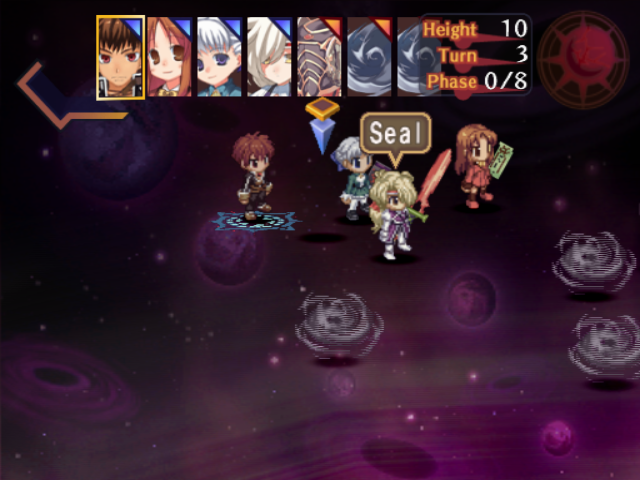 The video game industry can be a funny place sometimes. Consider the focus-grouped phenomenon of the “crossover” game, which recruits characters and other elements from two or more separate titles, sometimes by totally different companies, and duct-tapes them together in an effort to siphon in fan dollars from both ends of the marketing spectrum. The best-known specimens dwell within the fighting game sphere, a la Capcom’s collaborations with SNK and Namco, but the RPG realm has also crashed the party on occasion: the Mass Effect costume DLC for Final Fantasy XIII-2 is but one recent example.

No other outfit, however, can hold a candle in this area to prolific and oft-maligned developer Idea Factory: responsible for such left-field collaborations as Cross Edge and Trinity Universe (featuring various Nippon Ichi and Gust characters, plus Darkstalkers’ monster brawlers in the former), not to mention Hyperdimension Neptunia (hopefully the phrase “moe-fied Game Gear brandishing Keiji Inafune as a sword to slay a villainous R4 card/sorceress” sums up all you might have cared to know), perhaps their strangest brew of all appeared back on the good ol’ PS2.

Chaos Wars‘ lineup, to be frank, may as well have been pulled at random out of a hat filled with the names of less-than-mainstream gaming brands: alongside a small handful of original protagonists, you’ve got characters from Atlus’ SRPG Growlanser, Red Entertainment’s action offerings Gungrave and Shinsengumi Gunraw Den (aka Code of the Samurai), a more-than-generous schmear of Idea Factory’s in-house roster (primarily the long-running “Spectral” series), and, finally, as you probably inferred, Shadow Hearts. Interestingly, the latter’s inclusion seems to have been conceived as a major selling point: while no more than two or three characters were borrowed from most of the other included games, nearly the entire primary cast of Covenant is here in playable form, as is Alice, and Nicolai tags along as a villain with a few nameless underlings and a surprise NPC or two in tow. 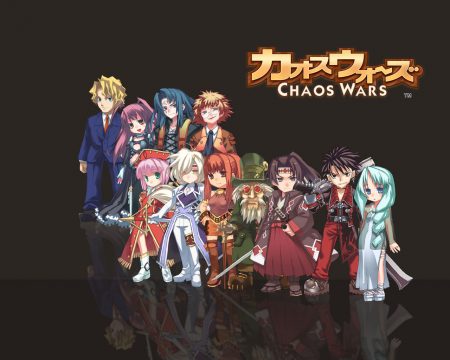 The game itself is an isometric, turn-based strategy-RPG that, true to its nature, plays like a chimera of features and ideas lifted from other series, though not necessarily the ones Idea Factory got the rights to. Movement during battle is handled in “gridless” fashion, a la Phantom Brave and Makai Kingdom; the well-documented Nippon Ichi penchant for flashy team-up techniques and super moves is certainly not lacking either. Then there are the ever-shifting “sun phases” (which affect enemy strength) and the chance for one of a character’s abilities to randomly mutate into something completely different (though you do have the handy ability to “lock” stuff you’d rather keep), seemingly inspired by the Shin Megami Tensei games. Characters can also enter a temporary, powered-up “Realize” state, similar to Jeanne’s divine armor from Level5’s Jeanne d’Arc…which, to be fair, wasn’t out yet when Chaos Wars released.

Despite its cobbled-together origins, at a glance this unholy amalgamation’s prospects don’t look half bad: the stumpy sprite-based graphics, while hardly state-of-the-art, have a certain charm about them, and the developers have made at least some effort to be faithful to their inspirations (though obviously the dimension-rending plotline shouldn’t rate more than a moment’s attention). For Shadow Hearts fans, little “tributes” to the original games (and unlockable character bios and artwork) are frequently on exhibit: dialogue text is littered with references and in-jokes for the initiated, battle music from Covenant plays whenever a series character’s turn comes up, and certain special attacks will evoke weapons and transformations from the original games (yes, Grand Papillon is here in all his manly glory).

Unfortunately, despite some surprisingly promising (if über-nerdy) foundations, Idea Factory again shoot themselves in the foot via their infamous penchant for glossing over the essentials with lots of confusing numbers and glittery otaku window dressing. Base stats are wildly imbalanced across the ever-ballooning cast, and leveling everyone and their moves up (via a Final Fantasy II-esque “stats increase through repeated actions” slog) to the point where they become useful is a Herculean task, relegating a good portion of your army to a near-permanent seat on the bench. Certain in-game systems are never clearly explained, loot and quest appearances are irritatingly random, and the challenge level can make very sudden jumps, leaving you grinding (and grumbling) through skirmish after skirmish without progress for far too long. 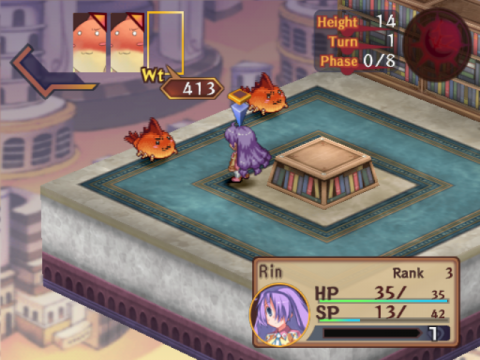 So you’ve got a mostly-“meh” SRPG populated with personalities from a smattering of highly niche titles, many of which have seen only limited release in the West…or no release at all. What do you do with it? If you’re budget publisher O3 Entertainment, you localize it, that’s what! Seemingly eager to add yet another layer of “seriously, this happened” to Chaos Wars‘ personal file, the game hit American shelves with a near-audible “thud” late in the PS2’s life cycle, as a Gamestop store exclusive, no less. Needless to say, it was a tough sell: even most of the intended audience, who could recognize some portion of what was on offer, were left out of the loop a good deal of the time, asking “uh, who is this, again?” when many of the supposed headliner characters showed up.

Then there’s the localization itself: most anyone who remembers Chaos Wars at this point probably owes the distinction to a YouTube video or two of the painfully horrid English cutscene voice acting, some of which was phoned in on the fly by (brace yourselves) family members of O3’s CEO. Fortunately, the original Japanese voices play in battle and can also be turned on for story sequences, but the roughly-translated text has its own problems: so little cleanup was done, for instance, that Yuri’s original Japanese name, Uru, was left intact, and if you believe this was an artistic decision then we’ve got a bridge to sell you.

Coincidentally or not, Chaos Wars would be O3’s last stand, as the company found itself out of business later that same year. In the end, while not a complete loss, this one’s not even close to an essential pickup, though if you’re willing to sniff out a copy at this point it can be had for a song. If the leftover cash is burning a hole in your pocket feel free to seek out some Japanese promo posters, a pre-order DVD, or an OP single containing the game’s theme song and an extra track or two on the secondhand market.