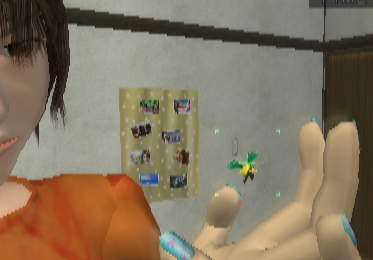 The PlayStation 2 era was a time when the Japanese games industry was at its height in terms of creativity, originality and vitality. Crazy experiments like Katamari Damacy, Gitaroo Man or Disaster Report not only went rampant in their home country, they even managed to generate moderate recognition in the West. Another product of this time was the idea of an action adventure that consists solely of a string of fights against enormous boss enemies, who outsize the protagonist by a magnitude of several hundred times. Only by mounting their colossal bodies and attacking their weak spots directly, the in comparison puny hero could even hope to stand a chance against them.

If that description made you think of Shadow of the Colossus, you’re about four years late. Long before Fumito Ueda’s masterpiece, the giant-fighting subgenre belonged to Mister Mosquito, a little gem in the rough by the not-so-famous development house Zoom, formerly only known for some not-so-impressive titles like Genocide, Lagoon and the PlayStation mecha fighting game series Zero Divide. 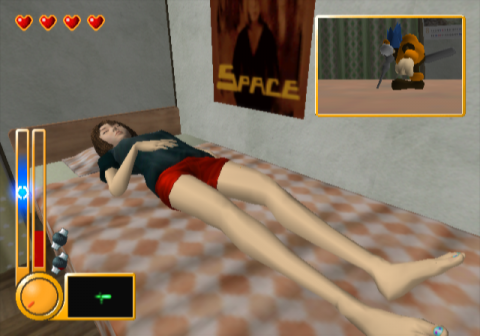 Simply known as Ka (“Mosquito”) in Japan, the concept executive producer Akira Satō – who used to be the director and/or producer on most of Zoom’s projects – cooked up to bring his team into the 21st century was sheer ingenuity: In the shoes of a tiny bloodsucking insect (yes, it actually wears shoes), players got to terrorize the typical (at least on the surface) Japanese suburban family Yamada by sneaking up to them, alleviating them from a few drops of their blood, and getting out with a full stomach.

The Yamadas are the balding father Kenichi, who always walks around the house in baggy clothes and is depicted as the most stereotypical Japanese middle-aged married man imaginable, the housewife and mother Kaneyo, who likes to leaf through old photo albums, and their daughter, the 17-year old high school jailbait Rena. The Yamadas are as dysfunctional as the next family: Kenichi keeps grossing everyone out, and Reina is hardly full of respect for her parents, while Kaneyo keeps clinging to the old family traditions, much to the chagrin of her daughter. Yet there is something they all have in common: They hate mosquitoes! 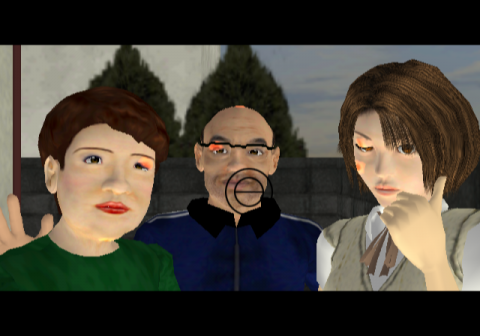 Each stage has the little pest infiltrate one of their rooms to get to the veins of its inhabitant. Getting around the area takes some getting used to, and the controls feel more akin to a helicopter than how one would imagine a mosquito. The primary L and R buttons are used to accelerate or slow down, but the inertia is pretty bad so the “vehicle” seems more heavy and sluggish than it should be. The left analog stick is used to turn around (with up and down inversed like in a typical flight sim), while the right one allows to make minute corrections to one’s position. R2 triggers a quick 180-degrees turn.

The rooms are really spacey for a small insect, and there is much to explore. The circle button lets you target certain hot spots, allowing the mosquito to activate objects like Rena’s stereo or light switches to manipulate the humans. But the real action starts when you target one of the designating sucking spots for the stage: The mosquito docks onto feet, ankles, forearms or eyelids, and pressing down the right analog stick makes it take a jump and drive its stinger into the skin. Then the sucking is commenced by rotating said stick, upon which a rack of gauges swings into the picture: The right one shows the progress in filling the current blood tank – each stage has a set quota to fulfill – while the left shows the involuntary donor’s shifting tolerance level. Only by adjusting the rotating speed the mosquito stays unnoticed. If the indicator goes too low or too high, the mosquito risks getting squashed, unless he’s swift enough to jump out of the danger zone by hitting any one of the face buttons.

Cheats turn the mosquito into the Yamada parents – or is it the other way round? Kafka-creepy!

At the beginning of most stages, the humans just hang out at their house; Rena is slacking off lying on her bed or taking a bubble bath in a shamelessly exploitative scene, Kaneyo searches around the storage room for her photo albums or prepares dinner in the kitchen, Kenichi watches TV or meditates in the traditional Japanese tatami room. At one point a friend of Rena even visits the house, only to be attacked by the mosquito as soon as she ends up being alone for a moment and – adding insult to injury – loses her glasses, leaving her stumbling around the floor in search for them. But when they get irritated too much by the mosquito, the music changes from a mysterious espionage soundtrack or elevator-grade easy listening to bombast fight tunes, and they engage in some of the weirdest battles with the mosquito: While they stomp around like Godzilla trying to squash it. Their “relax points” get revealed, and the aim is to bump into all of those to make them calm the hell down. Over the course of the campaign, they arm themselves with insecticide, and the latter stages actually start with them ready for battle, so they first have to be made relaxed to open them up for a blood donation in the first place.

But not enough: The itching gradually drives them insane and makes them litter their home with all kind of extermination measures that serve as environment hazard, from poisonous incense burners to mothballs and blue bug zapper lights. Also more common home appliances like air conditioners and a microwave oven prove to be formidable menaces from the eyes of a mosquito – the latter actually includes a challenge to snatch a certain amount of collectibles before the door is closed and the little bugger’s fate is sealed. 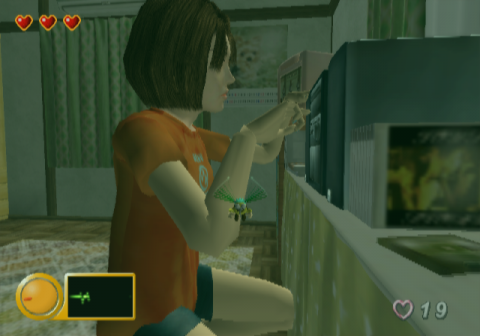 To make sure getting through the 12 stages isn’t all there is to do in Mister Mosquito, there is lots of stuff to unlock: Small Heart Rings fill all the stages; getting 50 of them expands the mosquito’s life energy. Food icons give hints about the game, and concluding the battle scenes within a set time limit activates several colors for the mosquito to choose from. The most interesting feature, however, are the EX blood tanks: Collecting all of them throughout the stages and filling them up after the default tanks provides the mosquito with enough blood reserves to make it through the winter, enabling it to terrorize the Yamada family for yet another summer. This is essentially a new game plus mode, with mostly the same stages, but higher difficulty and some changed dialogue between the Yamadas.

As far out as Mister Mosquito already is, its most bizarre feature is this 2-player mini game that can be accessed by cycling the right analog stick 30 times on the title screen. In this brief diversion, both players take control over balding men on bicycles and have to bump into each other to push the opponent off a huge circular stone pillar.

Most of the time, all the players can do is ride around the ring using particularly awkward tank controls from an angular top-down view and perform ridiculously high jumps that might give them the upper hand in a collision. All these actions fill up a “rocket gauge,” and activating a fully charged gauge gives the bicycle a rocket boost, which unfortunately is most likely to send the own cyclist flying down. 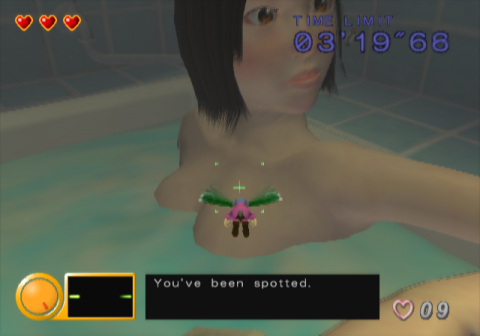 One of the greatest and at the same time most morbid attractions of Mister Mosquito really is seeing the downfall of the Yamadas, as they turn from an ordinary family into insecticide-spilling martial arts masters. Every stage is preceded by a dialogue where they discuss their suffering through the latest mosquito attacks and their next countermeasures. As the rooms get more and more foggy from the insecticide and the Yamada’s end up lying half-unconscious on the floor, the predominantly goofy narrative takes a rather more serious tone to strike home its message – it is now the humans who have become the monsters, hate-filled zealots that nearly destroy themselves on their crusade against a minor threat.

Mister Mosquito seems just like the kind of game that would stay in Japan forever and be only known amongst the few importers that seek out quirky Japanese titles. The early 2000s were a wondrous time, though, and Eidos Interactive of all publishers had just launched their label Fresh Games, which was aimed at bringing exactly this kind of crazy experimental game to Western audiences. There were only ever five games published under that umbrella, the others being Legaia 2, Mad Maestro, Swingerz Golf and R-Type Final. Mr. Mosquito – going in Europe by the pseudo-cool spelling Mr. Moskeeto – was fully localized in English, although the dub is rather awkward. Kenichi got a thick Asian fake accent which makes the game come off as racist despite being originally developed in Japan. Kaneyo has a more downplayed one, while the young girl Rena speaks flawless English. The emotionless delivery of the narrator, who seems to keep crying “I’m dead inside” in between the lines on the other hand only helps to strengthen the strangely depressing story. 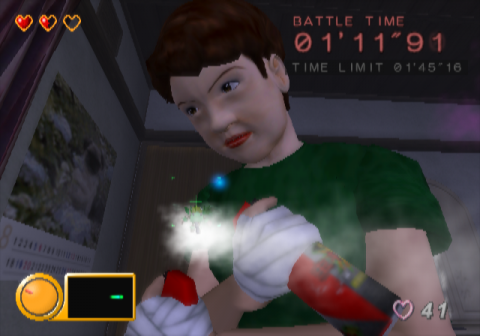 Localization issues aside, the potential of Mister Mosquito as a whole seems not fully realized, many of which is certainly due to technical limitations. The rooms feel just a wee bit too non-interactive, despite considering the very real limits to the range of actions a mosquito would have. The concept seems to cry for a kind of sandbox game where you freely fly around the house and do things in a more free-form way, with dynamic daily activities for the Yamadas, bloodsucking from any exposed part of their bodies rather than a few fixed spots, and mosquito bites showing up in real time. There are a few bites seen in cutscenes, but it’s just a few spots on the faces and they look hardly convincing. The first eleven stages are all confined to a single room, only in the final challenge it’s possible to enter different parts of the house by “attacking” the doorknobs, sucking a last drop of blood from each family member, and finally escaping the insecticide-infested home. Mister Mosquito really could have profited from an expanded take in form of a reimagening for the next console generation, but all it ever got was a direct sequel for the PlayStation 2 two years later…